This is the first of a series of blogs exploring two federal programs aimed at spurring economic development in Appalachia by repurposing old, unused coal mining sites into new, vibrant economic projects. Looking at the proposed RECLAIM Act and the existing Abandoned Mine Lands Pilot Program, we discuss the need for smart, sustainable and community-driven economic projects, and examine the ones that work, and those that don’t.

For more than a century, the needs and interests of Appalachian communities have been beholden to extractive industries. In many areas, the coal industry has maintained a stranglehold over the region, subjecting local economies to boom-and-bust cycles, and leaving environmental and public health disasters in its wake. 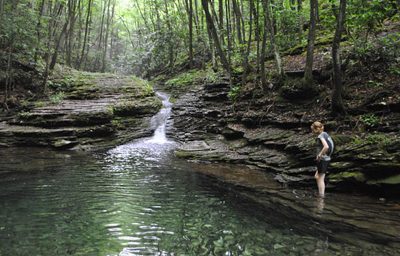 A resident of Big Island, Va., wades into the swimming hole on the Devil’s Fork Trail, which hikers encounter before reaching the Devil’s Bathtub. Photo by Joe Tennis

To build a new economy in Appalachia, a diversity of enterprises is key. One path towards greater economic diversity can be found in the remediation and creative redevelopment of certain abandoned coal mining sites. Appalachian Voices is working with partners across the region to realize such efforts.

In 1977, Congress passed the Surface Mining Control and Reclamation Action (SMCRA), to regulate strip mining for coal and to mandate post-mining environmental cleanup and reclamation standards. But a great deal of destructive mining had already occurred prior to 1977, leaving Appalachia and other mining areas pockmarked with the scars of extraction.

SMCRA initiated an inventory of pre-1977 mining sites, called Abandoned Mine Lands (AML), and established the AML Fund to pay for the long-overdue reclamation of these sites. To maintain the AML Fund, mining companies are required to pay a fee of 28-cents on every ton of surface-mined coal, and 12-cents on every ton of coal mined underground. AML Funds are then distributed to state mining agencies and Native American tribes according to need, calculated by a formula taking into account both current and historical coal production. These states and tribes then award grants to local governments and other entities, to implement AML cleanup and reclamation projects. 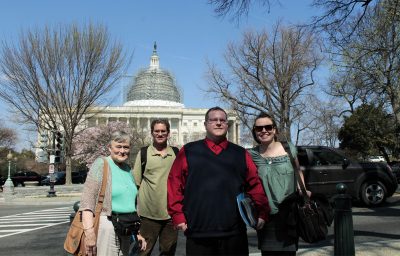 Representatives of The Alliance For Appalachia during a March trip to Washington, D.C.

In recent years, environmental advocacy and community development organizations (including Appalachian Voices) have been pushing for the RECLAIM Act, a bill that would provide an immediate economic boost for Appalachia through the release of $1 billion in AML funds. The money, which is already in the fund, would be in addition to the yearly allocation of funds to states and tribes. The concept was originally envisioned in the Obama administration’s Power Plus Plan, a series of proposals designed to assist local and regional economies distressed by the declining coal economy. Subsequently, in 2016, the RECLAIM Act was sponsored by Rep. Hal Rogers (R-KY) and Sen. Joe Manchin (D-WV), and it has gained substantial bipartisan support in both chambers. The concept has also been supported by dozens of municipalities and economic development authorities across the region who have passed resolutions. Despite this support, the RECLAIM Act has not yet become law.

Instead, starting in 2016, Congress has appropriated more than $300 millions for the AML Pilot Program with the aim of demonstrating what could be accomplished on a wider scale with passage of the bill. Unfortunately, the implementation of the pilot program has not always reflected the design of the RECLAIM Act.

First, the allocation of pilot funding does not require community input, while the RECLAIM Act would mandate a process for public engagement before funds released.

Secondly, the pilot program doesn’t require applicants to include any actual environmental remediation in their proposals. AML Pilot projects may include remediation of AML features, but they can also be sited on mined land that is already reclaimed, or they may simply be adjacent to a pre-1977 mined area regardless of whether it is reclaimed or not. The RECLAIM Act, on the other hand, would continue to designate funds for environmental cleanup and reclamation of abandoned mine lands, while adding a preference for sites with a clearly demonstrated plan for post-reclamation economic use.

As a result, the quality of projects funded by the AML Pilot Program varies significantly. When community groups and advocacy organizations have been proactive in the process, projects have been funded that have real environmental and economic benefits, and are reflective of local people’s ideas and interests. In other cases, however, the funding has propped up the pet projects of politicians and a narrow set of powerful interests.

The good and the bad

On the positive end of the spectrum, Scott County, Va., has received AML Pilot funding to seal off old, exposed coal mine portals that pose a danger to the public safety, and in so doing, improve trails, signage and parking for the Devil’s Bathtub, a stunning clear-water swimming hole hidden away in the Jefferson National Forest. The site draws thousands of visitors each year, many of whom travel into Southwest Virginia from neighboring states. Both the county and the nearby community of Dungannon have worked for years to enhance and promote this natural, cultural and economic resource.

On the negative end, the Kentucky Energy and Environment Cabinet has committed AML Pilot funds to subsidize the construction of water and sewer lines for a proposed federal prison in Letcher County. To say nothing of the many injustices associated with mass incarceration generally, this particular prison has been met with local opposition and is the target of a lawsuit filed on behalf of federal inmates.

Another notable difference between the RECLAIM Act and the AML Pilot Program is that while the RECLAIM Act would simply alter the criteria by which existing AML funds are spent, the Pilot Program is funded by an appropriation from the general treasury. This means that instead of the industry that is responsible for the existence of Abandoned Mine Lands paying for these projects, everyday taxpayers are footing the bill. Meanwhile, the National Mining Association, the lobbying arm of the coal industry, is pushing Congress to eliminate the requirement that coal companies pay anything into the AML Fund at all. 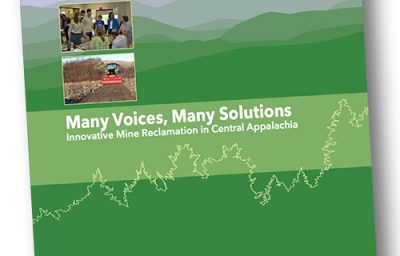 In some ways, the AML Pilot Program was the short-term victory that resulted from early lobbying efforts in support of the RECLAIM Act. But as problems with the program’s implementation continue to come more into focus, Appalachian Voices and our allies are working harder than ever so that legislators and agencies advance an Abandoned Mine Land strategy that truly prioritizes economic diversification and environmental remediation. A top priority is getting the RECLAIM Act re-introduced — and passed — this Congress. It’s critically important that concerned citizens from Appalachia and beyond voice their support for the bill when the time comes.

Find out how you can engage:

It must be said that while we do want to catalyze creative economic use of abandoned mine lands, the central problem in our region’s economy has never been a lack of innovation or entrepreneurialism, but rather a gross imbalance of power. Extractive industries like coal and gas regard our land and people as raw resources to be used up and discarded. This is why the region is pockmarked with old coal sites in the first place. It’s also why miners’ pensions, healthcare and black lung disability benefits are under threat, and why countless Appalachian communities lack reliable access to clean water.

While we work to pass the RECLAIM Act, let us also put our weight behind the movement for clean water; the efforts of miners to ensure that their most basic needs are met; and many other parallel struggles to affirm the rights and dignity of all people. Unless and until we bind these threads together, there will be no just, or fair, or new economy for Appalachia.