A rare bipartisan proposal aims to tackle two pressing issues related to the flailing coal industry — the need for new economic opportunities in central Appalachia and repairing environmental damage from decades of mining.

In March, nine grassroots advocates from Appalachia traveled to Washington, D.C., to meet with congressional representatives and staff from the White House and federal agencies. The week’s events were coordinated by The Alliance For Appalachia, a coalition of 15 environmental and community organizations including Appalachian Voices, the publisher of this newspaper.

The top priority was to inform regional legislators about the RECLAIM Act — a bill that intends to breathe new life into struggling central Appalachian economies while remediating land and water polluted by decades-old abandoned mines.

Representatives of The Alliance For Appalachia during a March trip to Washington, D.C.[/caption]Jack Kennedy, clerk of Circuit Court for Wise County and Norton, Va., and a former member of the Virginia General Assembly, says that the RECLAIM Act could lead to solar utility projects on abandoned mines and other endeavors.

“The RECLAIM Act passage would provide Appalachian community jobs immediately working to ameliorate brownfield real estate into a productive state for commercial or agricultural or other productive purposes over a period of time,” he wrote in an email.

The bill’s support from legislators like Rogers and Griffith — staunch opponents of environmental regulation, which they allege is responsible for Appalachia’s poor coal market — signals a willingness to cooperate with the administration to provide economic and community development in areas that have depended on the coal industry.

Under the RECLAIM Act, $1 billion from the federal Abandoned Mine Lands fund would be directed to qualifying states and tribes over a five-year period starting in 2017. The AML fund was established in 1977 to restore land and water contaminated by coal mines that were abandoned before the federal surface mining law took effect that year. The AML program is funded by a per-ton fee on coal production, and the money is distributed based on a state or tribe’s current coal production rather than the amount of damaged land and water.

Protect Our Water, Reclaim Our Future

Join The Alliance for Appalachia in Washington, D.C., to speak with legislators and decision-makers June 5-8. For more information, email Alannah@TheAllianceForAppalachia.org.

Presently, the AML fund holds $2.5 billion that is not dedicated toward specific projects, though the interest helps support a pension fund for roughly 100,000 retired union miners. This $2.5 billion was intended as a reserve fund for states to use after 2021, when the AML program is set to expire — the RECLAIM Act would expedite the disbursal of $1 billion from that pot.

According to a July 2015 report by the AML Policy Priorities Group, directing $200 million annually to abandoned mine lands projects for five years would bring national economic benefits of 3,117 jobs and contribute close to $500 million to the United States economy. The researchers, affiliated with Appalachian Citizens’ Law Center and The Alliance for Appalachia, estimated that central Appalachia would see about 35 percent of those benefits. They called for allocating the $1 billion in a way that differs from the RECLAIM Act by also considering economic distress. Such a formula would further boost the benefits for the area.

Even enacting RECLAIM with the current formula could be a powerful catalyst. “By expanding the scope of the AML program to consider economic benefits, Rogers and his colleagues have introduced a forward-thinking solution to one of the biggest challenges facing our region today,” Kennedy wrote in a March op-ed in the Richmond Times-Dispatch. “The fact that the bill continues to gain bipartisan support is noteworthy and speaks to the urgent need for creative approaches to the economic woes of our coal regions.”

POWER-Plus received a warm welcome from local governments and community groups in the region, many of which were already working to diversify the historically coal-dependent economy. Twenty-eight local governments and organizations passed resolutions supporting the economic revitalization package, including 12 entities in Rogers’ home district. 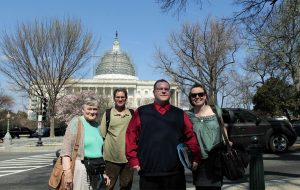 Among those were the Benham Town Council and the Benham Power Board, a municipally owned utility. In early 2016, Carl Shoupe, a retired coal miner in Harlan County, Ky., and member of the Benham Power Board, wrote to Rogers and asked the congressman to help secure the funding needed to implement the POWER-Plus Plan. Citing the local declarations of support, he wrote, “As the resolutions say, we believe our transition should be one that ‘celebrates culture; invests in communities; generates good, stable and meaningful jobs; is just and equitable; and protects and restores the land, air and water.’”

Lawmakers incorporated some of the president’s plan in their one-year federal budget for 2016 including a proposal by Rogers to direct $90 million in AML funding to projects with economic potential in Pennsylvania, Kentucky and West Virginia, the three states with the highest remaining costs for cleaning up abandoned mines.

As of early April, the RECLAIM Act — which would go a step further with its $1 billion allocation — had an equal number of Republican and Democratic co-sponsors. As the bill picks up more backers, a number of regional stakeholders are paying attention to how the bill is structured, and how the federal funds would be distributed.

“The Alliance [for Appalachia] is working to ensure that a strong public engagement process is included in RECLAIM,” Economic Transition Coordinator Lyndsay Tarus wrote in an email. “If the intent of the legislation is to boost economic transition, then communities most in need of the funding need their voices heard.”

During their March trip to Washington, D.C., the Alliance representatives also spoke with federal agency staff about the need for reliable oversight of clean water regulations, including a strong Stream Protection Rule to protect waterways from mining damage.

“The Alliance understands that meaningful and sustainable economic transition is just not possible when the basic necessity of clean water isn’t available,” Tarus states.

The expedited release of abandoned mine lands dollars is one piece of a broader effort to assist central Appalachia and other communities around the country experiencing economic hardships due to coal’s decline.

In addition to the abandoned mine lands proposal, President Obama’s POWER-Plus Plan would strengthen the healthcare and pension plans for approximately 100,000 retired coal miners and their families. The Miners Protection Act, a bill to enact the pension change, is currently in the Senate. The POWER-Plus Plan also calls for two new tax credits for power plants that use carbon-capture technology.

Another core component of the plan is the proposed Partnerships for Opportunity and Workforce and Economic Revitalization initiative, which would grant $75 million in economic development funding to the region. These funds would provide more support for former coal workers through programs such as the Appalachian Regional Commission and the U.S. Department of Agriculture’s Rural Development program. An additional $5 million to the U.S. Environmental Protection Agency’s Brownfields Program would also clean up contaminated lands that have economic potential in formerly coal-dependent communities.

This POWER funding would help these agencies provide workforce training and bolster economic developments such as broadband access to attract new business.

In fall 2015, the Obama administration announced what it called a “down payment” on the plan — nearly $15 million in grants to kick-start some of these initiatives. So far, the grants have been allocated to strengthen Kentucky’s local food supply chain, bring agriculture to reclaimed mines in West Virginia, provide job training in fields such as technology and local food, develop community-specific economic diversification plans, create a substance abuse treatment center, and help new and existing industries capitalize on an expanding broadband network. Read more at right.

Kennedy waxes enthusiastically about the prospect for economic revitalization embodied in the RECLAIM Act and the POWER-Plus Plan. “Restoring Appalachian opportunity is essential,” he states. “We need to be among the first providing multiple 20 to 80 megawatts of small commercial-scale solar utility farms to learn and culturally accept the energy transition underway in our nation and around the globe.”

“Change is hard, but it is the only constant even for us in the more isolated mountains,” he continues. “We must adapt, improvise and overcome multiple challenges.”

As legislators, agency administrators and regional advocates work to pass these various federal economic proposals, one of the challenges for local supporters will be to make sure citizen input and priorities are reflected in the implementation of these programs.

“The key thing is citizen involvement,” says Mary Love, a Kentucky resident and member of The Alliance For Appalachia’s federal strategy team who met with legislators about the RECLAIM Act. “They have to show that they have citizen involvement in deciding what projects to fund. You can bet that we’ll be all over that.”

➤ In southeast Kentucky, the POWER Initiative provided funding for the nonprofit media institution Appalshop to work with Southeast Community & Technical College and ten local employers to develop a one-year certificate program in technology. The three-track program would offer classes geared towards web coding, graphic and web design, and network infrastructure and security services. According to Ada Smith, Appalshop’s institutional development director, a formal certificate in technology would provide “a marked signifier to others that this person is interested, available and ready to work.” Smith hopes that courses will begin in fall 2017, and is optimistic that the program could be replicated at other community colleges.

➤ The Southern Appalachian Labor School in Robson, W.Va., received a planning grant to evaluate how both abandoned and reclaimed surface mines in the area might be used to provide economic benefits. “Right now we’re going to try to scope post-mining sites in the county, see what’s available, do a solar site analysis and see if it’s feasible to put in a solar farm,” says Director John David. The team will be looking at issues such as grid connectivity and cost, in addition to considering other projects like orchards and a senior living complex.

➤ The organization Friends of Southwest Virginia received a POWER Initiative grant to advance ongoing tourism, recreation and entrepreneurship projects. Among the endeavors is a new ecological education center near the Clinch River that will serve as both an educational and entrepreneurial hub. Another project will improve riverfront access from the New River to five downtown centers in Giles County. In Wise County, local tourism partners plan to create a visitors center in Norton to provide information about the region’s assets.

CORRECTION: An earlier version of this article incorrectly stated that the ecological education center supported by Friends of Southwest Virginia would be on the Guest River. Instead, the proposed center would be on the Clinch River near St. Paul. We regret the error.