Special to The Front Porch: 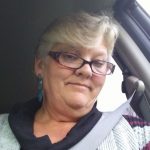 Our guest today is Arietta Ann DuPre. DuPre’s land and her neighbor’s land in Wayside, W.Va., serves as a home for rescued horses and other animals – and in early 2018, Mountain Valley Pipeline developers cut her horses’ pasture land in two. While the company assured DuPre that she would be treated well, DuPre maintains that Mountain Valley and its contractors have broken most of their promises and endangered the lives of both her and her animals — including intentionally running over and nearly killing one of her dogs. 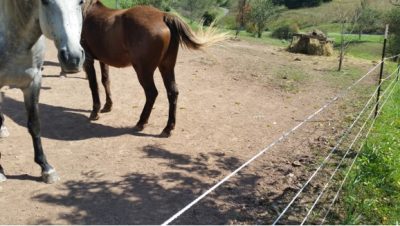 As I sit here this evening, the actions of Mountain Valley Pipeline, LLC, and their contractors over the past year run through my thoughts, upsetting the peaceful feelings I have always enjoyed by living in the country. About this time last year, I had my first contact with Bob Bell with Coates Field Services, an MVP contractor, concerning my horses.

My horses have been kept in the fields of a neighbor and lifetime friend, and Mountain Valley had bought a right-of-way through these 2 fields. Bob said that although Mountain Valley would block my horses from any pasture land while they did work, the company would supply feed in the meantime.

Well, that didn’t happen. For two-and-a-half months, I had to supply grain for my horses so they wouldn’t starve. Mountain Valley finally began supplying feed in July 2018. He also informed me that since I was not the landowner in question, I would have no issues to worry about – boy if that were only true.

In the beginning, we asked them to buy us out as I just knew there would be trouble on top of trouble, and that is still the case; but instead they assured me that my family would have no problems. WOW, was that a lie.

The current problem is the fact that we agreed to put the horses in our backyard. They went from acres of grazing land to about 1 acre – for three horses. We own no shelter in our yard that is suitable for horses.

A Mountain Valley representative told us they would supply the needs of the horses while they are in the backyard – another lie, as they are now refusing to give the funds needed to build a shelter. They also destroyed the shelter in the pasture, so now we must have something for there, too.

We offered a proposal where they would give the funds to build a three-stall shelter on sleds, so that when the horses go back into the field, we would move the shelter to the fields so they would have shelter. Mountain Valley refused the proposal.

This is animal abuse, negligence, and poor relations. In the beginning, we offered to put the horses on another neighbor’s land while Mountain Valley was working here; all they had to do was supply the needed fencing materials. The horses would have been in a pasture so there would have been less hay involved, and more. They said no, then later came back and asked if we would do it, but lied and misrepresented the date they wanted to blast, giving us two days to get the fence built and we said no as it couldn’t be done that fast and we had offered this solution in the first place.

Our horses had a natural shelter with trees overhead, which Mountain Valley destroyed when they cut down the trees down. One night we had cold rains and high winds – my horses had nowhere to get out of the weather because Mountain Valley decided to rescind their word. Luckily, our neighbors let us use a shelter on their land afterwards and for the time being. But once Mountain Valley leaves, my husband and I will have to bear the expense of building this shelter when it wouldn’t have been needed without Mountain Valley coming here in the first place.

Two of our horses were rescued from abusive situations. Our third horse is with us because his former owner has severe medical problems and felt we would give the horse a good home.

This shelter issue is just the latest of the various problems we have suffered at the hands of Mountain Valley Pipeline developers. Here is a list of the struggles they have put us through:

I’ve reached out to just about all of our local and state representatives — and none of them have been willing to help.

We had a state representative that wasn’t even from this district that came down here and talked to us. But we can’t even get our own governor or our own local representatives to come and talk to us.

When I called Gov. Jim Justice’s office, I got ahold of a woman and told her what Mountain Valley had done. She just told me, “I’ll tell Gov. Justice that you don’t want jobs in West Virginia.”

It’s sad that our governor, our congressmen, didn’t take part and say look: this is the way you’ve got to treat the people here. You can’t walk all over these people, you can’t do this. But it’s the same old adage; money talks, B.S. walks.

FERC hasn’t been much help either as they seem to be able to give Mountain Valley permission to do just about anything, even basically break the laws. But when you contact them concerning these various negligent, illegal, unethical and immoral behaviors, their response is “we can’t do anything about that.”

If you have been experiencing problems with Mountain Valley or any other government-approved entity or government office, PLEASE, send letters to the papers, the television stations, radio stations, etc. Put copies of your letters in local businesses – get the word out. Your silence is just as bad as what is being done to you. We still have our right to free speech – and while we do, use it to help right injustices.