Public hearing on discharge permit to be held September 20th 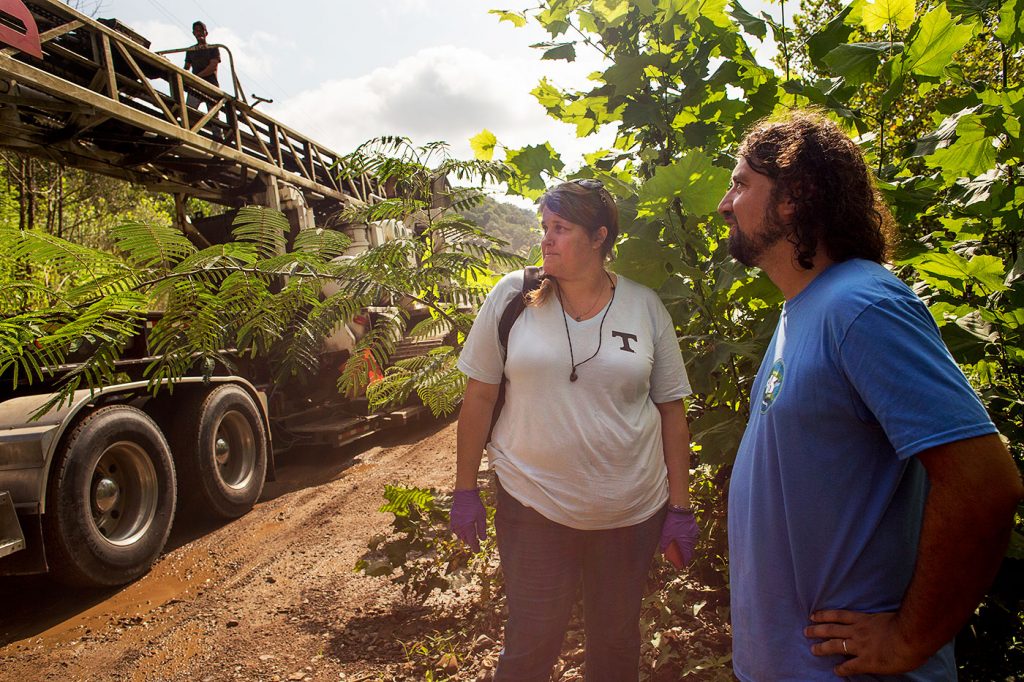 April Jarocki and Appalachian Voices’ Matt Hepler watch mining equipment next to the Hatfield Cemetery near Cooper Ridge Mine.

The energy supply of the nation has largely shifted towards natural gas in recent years and, slowly but surely, renewables are also gaining market share. These trends have at times been interpreted to mean that mountaintop removal coal mining is over. This is far from the truth.

The devastating practice of destroying entire mountains and disposing of mining-waste into headwater streams is still happening across the Appalachian region. For folks living beneath these mines, the assertion that mountaintop removal is over can feel like a slap in the face. Despite dynamics and shifts in energy markets, when there is a mountaintop removal mine above your community, the issue is as dire as ever.

The Clearfork Valley of Tennessee has been intensely surface-mined going back decades. As a result, the ridges and hillsides of Campbell and Claiborne counties display a patchwork of mining scars in various states of affliction and gradual healing. Some of these scars are pre-regulation Abandoned Mine Lands while others illustrate the failures of common reclamation standards. The area’s waterways are contaminated to varying degrees with metals, salts and sediment, and support far less aquatic life than they once did.

Now, Kopper Glo Mining is moving forward with a nearly 1,500-acre mountaintop removal mine on Cooper Ridge, dealing yet another massive blow to the ecology and communities of this beautiful and resilient area.

Agency missteps in the permitting process

Kopper Glo began operations on Cooper Ridge Mine this past spring, clearing initial, albeit insufficient, regulatory hurdles. Now the company is seeking a Phase II National Pollutant Discharge Elimination System permit required under the Clean Water Act for discharging pollutants into public waterways. The second phase allows the company to release higher levels of pollutants than allowable under the Phase I permit.

The Tennessee Department of Environment and Conservation’s (TDEC) issuance of water pollution permits in phases is a notable problem. This allows the agency — whose mission includes “protecting and improving the quality of Tennessee’s air, land, and water through a responsible regulatory system” — to ignore the true total impacts of a mining operation on adjacent waterways by only considering portions of the mine’s impacts at any one time.

Another issue is that Kopper Glo and regulatory agencies consider this operation a “re-mining” project, suggesting that the area is already impacted by mining and that the Cooper Ridge mountaintop removal mine will serve to reclaim and improve previously mined areas. The truth is that only around one-third of the permitted area has been impacted by older strip mines. Rather than repair old scars of mining, the Cooper Ridge permit will simply triple the footprint of mining on this mountain.

Finally, Kopper Glo has a long history of violations at other mines in the area. Regulatory agencies like TDEC and the federal Office of Surface Mining Reclamation and Enforcement should not be so quick to grant additional permits to a company that has consistently demonstrated either an inability or unwillingness to operate within the confines of the law.

What’s wrong with this mine?

Any surface mine of this size will have severe impacts on ecology and nearby communities. This is especially true in areas like East Tennessee, where headwater streams abound and where homes are crowded into narrow valleys often right at the toe of mining operations. Concerns include excessive runoff, sedimentation of streams, alterations to groundwater hydrology and the discharge of high levels of selenium and other harmful substances into waterways.

In addition to adverse impacts to ground and surface water, the Cooper Ridge mine threatens important local community and cultural assets. The permit boundary sits just a half-mile behind Clairfield Elementary School, presenting concerns for the health and safety of the students, teachers and community members engaged in activities at the school. The mine also surrounds the historic and still-in-use Hatfield Cemetery — an area where logging related to the mine has already occurred and where mine workers are now parking trucks and equipment.

Appalachian Voices, and many groups and citizens, are making these points to the agency: