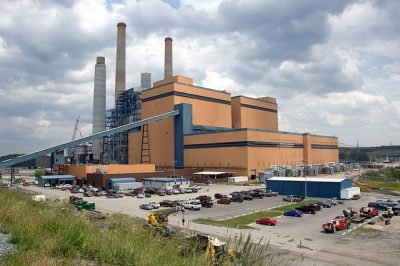 Coal ash from Duke Energy’s Belews Creek plant in eastern North Carolina is polluting the rivers and lakes near the site. Photo via Flickr.

CHAPEL HILL, N.C. – On behalf of Appalachian Voices, the North Carolina Conference of NAACP Branches, and the Stokes County Branch of the NAACP, the Southern Environmental Law Center today sent a notice of intent to sue Duke Energy to stop its violations of the Clean Water Act at its Belews Creek facility in Stokes County, near the predominantly African-American community of Walnut Tree, North Carolina, and nearby homes. Duke Energy’s Clean Water Act violations at the site include dumping its coal ash pollution into Belews Lake, Little Belews Creek the Dan River, and groundwater through leaks and seepage, and illegally using the creek as part of its wastewater pollution system.

Despite its long history of leaks and pollution resulting in fish kills and carcinogens in downstream drinking water, Duke Energy has proposed to cover up its unlined, leaking coal ash pit at Belews Creek, allowing continued pollution of groundwater and the nearby waterways.

“The people and communities living in Walnut Tree, the Belews Lake area, and the Dan River Basin deserve to be protected from Duke Energy’s coal ash pollution, both now and in the future,” said Myra Blake, attorney for the Southern Environmental Law Center. “By covering up and leaving its coal ash in unlined pits, Duke Energy will destroy part of the Dan River Basin and people’s groundwater with millions of tons of coal ash. Duke Energy’s current operation of the leaking, unlined coal ash pit at Belews Creek and any plans to bury North Carolina’s water resources in coal ash violate the Clean Water Act.”

Duke Energy has admitted that groundwater contaminated with coal ash pollution at Belews Creek flows beyond Duke Energy’s property boundary. In 2015, residents who rely on more than a dozen drinking water wells near the Belews Creek coal ash pit were told by the state not to use their water for drinking or cooking due to elevated levels of arsenic and other pollutants.

“Communities around and downstream of Duke Energy’s coal ash deserve safe drinking water,” said Amy Adams, Appalachian Voices’ North Carolina Program Manager. “The only proven way to stop this ongoing contamination is to remove the coal ash, as Duke Energy is already doing at a majority of its coal ash sites in North Carolina. Why has Belews Creek been left out?”

Duke Energy’s Belews Creek coal ash site sits in the middle of a predominantly African-American community. In response to testimony at a hearing near Belews Creek, the U.S. Commission on Civil Rights concluded that “the minimum standard for all coal ash storage is in lined, watertight landfills away from drinking water sources.”

“The people of Walnut Tree and surrounding communities have suffered the burden of Duke Energy’s leaking, unlined coal ash pollution for far too long,” said Reverend Gregory Hairston, Stokes County NAACP President. “We’ve been forced to fight for our right to clean water.” Under the federal Clean Water Act, citizens groups must give the polluter, DEQ, and the United States Environmental Protection Agency a 60-day notice of their intent to enforce the Clean Water Act. After the passage of 60 days, the citizens group may file suit in United States District Court to stop the illegal pollution.

Through court orders and agreements with citizens groups and regulators, Duke Energy is required to excavate its ash and move it to dry, lined storage at ten of its sixteen sites in the two Carolinas. However, Duke Energy refuses to commit to cleaning up its Belews Creek coal ash site and five other coal ash sites in North Carolina, which are the subject of ongoing litigation in state court in which Appalachian Voices is a party represented by SELC; several of these sites are also the subject of ongoing federal suits against Duke Energy for violations of the Clean Water Act and the EPA’s federal coal ash rule. In 2015, Duke Energy companies pleaded guilty 18 times to nine coal ash Clean Water Act crimes committed across North Carolina and remain under criminal probation.