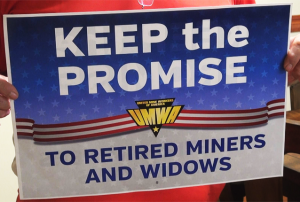 The Miners Protection Act would solve the problem of expiring health benefits and a nearly insolvent pension fund that thousands of retired coal miners rely on. But Congress must act soon. Photo from Jobs With Justice.

Tell your senators to pass the Miners Protection Act — and give America’s coal miners the benefits they have earned.

Coal miners put this country on their backs for decades, and America owes them an immense debt. Allowing either the pensions they’ve been promised or the health benefits many of them and their families desperately need to expire would disgrace all of us.

The Miners Protection Act is a bipartisan bill that would help solve both problems. The bill would use U.S. Treasury funds associated with the Abandoned Mine Lands program to permanently extend health benefits and to cover shortfalls in the pensions. The bill would not redirect funds designated for cleanup of Abandoned Mine Lands. We see the Miners Protection Act as complementary to the RECLAIM Act and, aside from fulfilling a moral commitment to miners and their families, it would provide an economic boost to our region.

Unlike so many things in D.C. these days, the bill has broad support. Five key Republicans are among the 22 Senate cosponsors, and just last year a committee passed the bill by an 18-8 vote. Lead sponsor Sen. Joe Manchin (D-WV) has successfully gained the support of enough senators to pass the bill — if it ever gets to the floor.

Let’s get something out of the way; it doesn’t matter who you blame for the current crisis. Maybe you blame Wall Street greed for ruining the pension plans? Or maybe you’d prefer to focus on the demise of the coal industry, which you’d like to put on the shoulders of President Obama and environmentalists. What about the fact that cheap and abundant natural gas is beating coal in the market? And didn’t Senate Majority Leader Mitch McConnell (R-KY) block these benefits on multiple occasions?

Look, all of that matters. It just doesn’t matter today. Because today, we must solve the problem.

The miners pension fund covers nearly 90,000 people. The fund provides an average of $530 each month, a sum that can make an enormous difference in quality of life for retired miners and miners’ widows. While most pensioners still live in coal-mining states, many do not. More than 1,000 live in North Carolina, for instance. If the pension fund were to become insolvent, it would be devastating for coal communities, especially those in Central Appalachia. But that impact would be felt throughout the country, too.

Time is running out, but this is a fight we can win. Sen. McConnell has already agreed to extend miners’ health benefits, which is a big political step. But it’s not good enough.