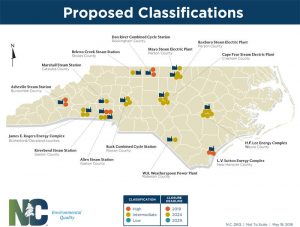 A map showing the N.C. Department of Environmental Quality’s risk classifications for coal ash ponds across the state. Click to enlarge.

UPDATE: As of June 22, North Carolina lawmakers had taken no further action on legislation related to coal ash cleanup in the state.

On May 18, the N.C. Department of Environmental Quality released the rankings for Duke Energy’s coal ash impoundments across the state following 15 public hearings throughout March.

Eight sites are classified “high priority,” meaning the impoundments must be closed and the toxic ash excavated and moved to a lined landfill by 2019. Duke has already agreed to fully excavate these sites. The remaining 25 were ranked intermediate and must be closed and excavated by 2024. It will be Duke’s decision as to whether the intermediate sites’ ash remains on Duke property or is moved to sites such as those in Chatham or Lee counties.

But those rankings could still change. DEQ requested a change to the state law governing coal ash disposal and asked the General Assembly for an 18-month extension during which Duke Energy can take action to remediate issues such as dam deficiencies, one of the key factors leading to the intermediate classifications.

DEQ officials also say that providing water to communities around the impoundments will alleviate drinking water quality concerns, another key factor. Giving Duke 18 months to make these changes would likely cause DEQ to reclassify the sites, opening the door for Duke to cap ponds in place. Citizens living near coal ash sites disagree with DEQ’s suggestion.

“Residents are angered that DEQ is already asking the legislature to consider changing the coal ash law in 18 months, likely creating further delays and loopholes,” according to The Alliance of Carolinians Together (ACT) Against Coal Ash — a coalition of community members directly impacted by the state’s coal ash.

On May 24, however, the legislature announced that it was currently revising Senate Bill 71 to reestablish the commission and provide future regulation for coal ash cleanup. Under the current writing of the bill the commission would have seven members, five of whom would be appointed by McCrory. Duke would have to provide water to residents within half a mile of coal ash impoundments. And if the appointed commission does not approve of the rankings within 120 days after recommendations, the rankings would be rejected.

The bill could relieve Duke from the responsibility of excavating coal ash threatening the water quality and harming nearby residents by causing air quality concerns and reducing property values.

Both the state House and Senate have approved the bill, but Gov. McCrory has vetoed it saying that it “weakens environmental protections, delays water connections for well owners, ignores dam safety, hinders efforts to reuse coal ash and violate the state constitution.”

Both the House and the Senate have enough votes to override the veto, but it now appears unlikely that lawmakers will take action.

While the law has been the center of attention for policymakers, it also concerns North Carolinians.

“This is a way for Duke to wiggle out of fixing the problem,” says Doris Smith, a Walnut Cove resident who lives roughly two miles from Duke’s Belews Creek Power Station, which was ranked intermediate. “And providing water does nothing for the pollution. The only solution is to get the ash out of here.”

Last year, more than 300 residents living near Duke Energy coal ash ponds were sent “Do Not Drink” letters from the N.C. Department of Health and Human Services informing them of unsafe levels of heavy metals in their well water including hexavalent chromium, a carcinogen. This March, the state agencies rescinded the majority of these letters claiming that further studies revealed the recommendations were overly cautious.

But no well testing or on the ground studies had occurred. DHHS State Epidemiologist Megan Davies revealed during a deposition that the “extensive study” that the letters referenced were actually literature reviews of other state and federal policies for regulating contaminants.

“I know the language of the letter says, ‘after extensive study,’ said Davies. “To me, that doesn’t mean — it just means after reviewing the literature.”

When asked if she thought the letters should have been rescinded, the deposition transcript shows Davies’ response was, “No.”

“They treat us like we are dirt,” said Doris Smith of Walnut Cove. “I know why they don’t want to move the ash, it’s because there is so much of it. But it’s done enough damage.”