Renewable energy is here to stay. But utility pushback and state policy battles could determine who has access to cleaner power.

Last December, Congress supercharged America’s already-booming solar industry when it extended federal tax credits for commercial and residential projects. The boost is expected to nearly double the total amount of solar installed — and the number of solar jobs — in the United States by 2021. 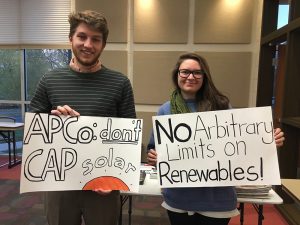 Citizens are calling on their power companies to increase access to renewable energy in creative ways. Appalachian Power Company customers attend a grassroots meeting to oppose extra charges and size limits on solar in Virginia. Photo by Hannah Wiegard

With federal incentives locked-in for the next five years, battles for the future of clean energy are heating up in dozens of states. Across the country, electric utilities are fighting to maintain monopoly control in the face of increasing power generation from distributed resources like rooftop solar or small wind projects that produce electricity near the point of consumption.

In many states, though, clean energy has built a constituency. Where the solar industry is well-established, it supports thousands of jobs and has the backing of a committed customer base that is calling for access to renewable power — for all.

Pick any state on the map and there’s likely a battle related to residential solar already underway. Take West Virginia, where lawmakers approved changes last year to net metering, a policy that allows utility customers with their own solar installations to offset the cost of power they draw from the grid with power they produce.

In March 2015, Gov. Earl Ray Tomblin vetoed a bill directing the state Public Service Commission to investigate utilities’ most common argument against net metering: that, as more homeowners go solar and save money, eventually customers without solar will be forced to pay more. 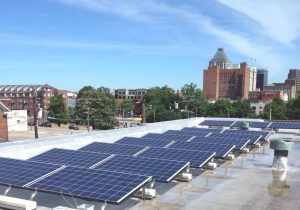 A solar project designed to test North Carolina’s ban on third-party electricity sales catches some rays on the roof of a Greensboro church. Photo courtesy of NC WARN

But groups including The Alliance for Solar Choice and WV SUN claimed the bill’s vague language could lead to fees and even punitive charges on West Virginians that already have solar. Two weeks after vetoing the original bill, Gov. Tomblin signed a revised version into law that also instructs the commission to consider the potential upsides of net metering.

Several state commissions are way ahead of West Virginia’s and have already concluded that the benefits of net metering are both vast and shared. In 2014, the Mississippi Public Services Commission found that net metering promotes energy security and takes pressure off the state’s power plants during periods of high energy demand.

A similar study conducted for the Maine Public Utilities Commission in 2015 valued electricity generated by distributed solar at 33 cents per kilowatt hour, compared to 13 cents per kilowatt hour, the average retail price of electricity in the state. The higher value accounts for benefits to customers with or without solar such as reductions in air and climate pollution.

Overall, a recent analysis by North Carolina State University’s Clean Energy Technology Center found that changes to net metering policies or the valuation of distributed solar were considered or enacted in 46 states last year alone. Many of those stemmed from utility-led efforts to thwart solar that are unlikely to let up.

The American Legislative Exchange Council, an organization of industry groups and state lawmakers that drafts model legislation, has resolved to change state net metering policies. In its 2016 corporate goals, the Edison Electric Institute, an association of investor-owned electric utilities that funds ALEC and helped draft the resolution, calls on power companies to continue pushing back against distributed generation.

Some utilities that have lobbied to impede distributed solar are also pushing to keep uneconomical power plants online. In March, FirstEnergy and American Electric Power, which have pushed for changes to net metering in West Virginia and other states, won approval from Ohio regulators to raise rates to keep seven aging coal plants and one nuclear plant operating until 2024, despite being uncompetitive in interstate electricity markets. Research by the Institute for Energy Economics and Financial Analysis indicates the plan could cost ratepayers more than $4 billion.

More than any other state in the Southeast, North Carolina has emerged as a national solar leader, especially when it comes to utility-scale solar farms. Between 2007 and 2015, nearly $6 billion was invested in clean energy development in the state. Last year, North Carolina added 1,134 megawatts of solar capacity, second only to California.

State tax credits for solar projects and a standard requiring utilities to meet a portion of electricity demand with renewables have made the state a model of solar success. But some North Carolina policymakers want to take a different path. Lawmakers let the state’s solar tax credit expire at the end of 2015. 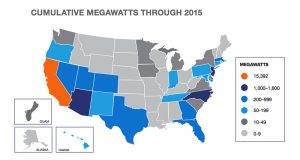 Solar power is one of the fastest growing energy sources in the United States. But due to a patchwork of regulations, the total amount of solar capacity installed varies widely by state and sector. Illustration courtesy of the Smart Electric Power Alliance

After an attempt in the state legislature last year to weaken the state’s Renewable Energy Portfolio Standard, solar advocates are doubling down to communicate the benefits clean energy provides to residents.

“We learned that there is a lot of misinformation surrounding the solar industry and the clean energy industry as a whole,” says Maggie Clark, Interim Director of Government Affairs of the N.C. Sustainable Energy Association. “It is falsely assumed that the [renewable energy standard] is a cost to ratepayers.” 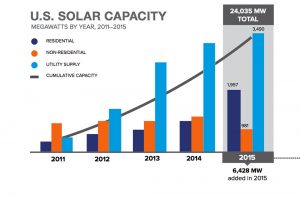 Solar power is one of the fastest growing energy sources in the United States. But due to a patchwork of regulations, the total amount of solar capacity installed varies widely by state and sector. Illustration courtesy of the Smart Electric Power Alliance

According to the North Carolina-based research institute RTI International, energy costs are lower today than they would have been if the state continued to rely entirely on conventional power sources. Researchers estimate investments in renewables and energy efficiency to comply with the renewable standard will generate $651 million in savings for ratepayers between 2008 and 2029.

Even Jim Rogers, who was CEO of Duke Energy in 2007 when the company helped craft the standard, called out the policymakers pushing to weaken it.

Companies including New Belgium Brewing and Mars, Inc., sent a letter to lawmakers opposing the effort because the renewable standard gave “companies like ours the business case to build and operate in North Carolina.” Apple, Google and Facebook, which have data centers in the state, warned legislators in another letter that freezing the standard would “risk undermining the state’s almost decade-long commitment to renewable power and energy efficiency.”

The renewable standard survived due to a groundswell of public attention and support from a broad range of stakeholders. But now a different fight is pitting companies and communities that want easier access to affordable solar against Duke Energy.

In April, the North Carolina Utilities Commission shot down an experimental solar project set up on a Greensboro church to test the legality of third-party electricity sales. North Carolina is one of only four states in the country with a ban on third-party sales, which allow energy producers other than utilities to compete in the clean energy marketplace. Duke Energy operates in three of those states.

NC WARN, the Durham-based advocacy group behind the test project, appealed the commission’s ruling in May and disputed the idea that North Carolina is a leader on solar when it lacks policies to promote commercial and residential installations.

Unlike North Carolina, the solar market in Virginia has sat idle for years. The commonwealth has about the same potential for solar as its southern neighbor, but lacks a mandatory renewable portfolio standard and never enacted state tax credits to bolster clean energy investments.

An April report by the Center for Biological Diversity gave Virginia — among other southeastern states including Alabama, Georgia and Tennessee — an “F” on policies to help residents access solar. That’s harsh but not far off, according to Ivy Main, an environmental lawyer who writes about Virginia energy policy on her blog Power for the People VA.

“We’ve reached an economic tipping point where some residents and businesses find it worth doing,” says Main. ”But we also have standby charges that apply to larger residential systems.”

Another emerging trend is actions by utilities to impose fees on customers with solar that still need the grid as backup. Dominion Virginia Power and Appalachian Power Company have both instituted “standby charges” in Virginia that will cost customers with solar systems larger than 10 kilowatts hundreds of dollars each year.

Since currently only a handful of the utilities’ customers have systems that size, Main argues the extra fees are intended to discourage the residential solar market rather than protect ratepayers. And, like utility arguments against net metering, the charges ignore the benefits of distributed resources.

“[Distributed generation] is being done with private investment, but it is a tremendous public service,” Main says.

As Duke Energy and Dominion restrict access to solar, they’re making the case to utility regulators — and ratepayers — that building the $5 billion Atlantic Coast Pipeline to transport natural gas is a must to maintain reliability and meet growing electricity demand. The two utilities will own a majority stake in the project, but if anticipated demand for natural gas does not materialize, their customers will still be on the hook to pay for the pipeline.

“We’re seeing a clash of visions,” says Main. “It’s going to take a lot of public pressure to expand access to clean energy and make sure we’re not locked into fossil fuels for the next 30 years.”