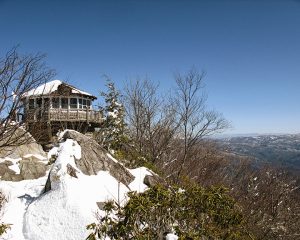 “I have never wanted to leave the top of a mountain,” wrote Harvey Broome, a prominent advocate for the creation of the Great Smoky Mountains National Park, after an inspiring 1956 hike to Mt. Cammerer.

You, too, will long to stay when you trek to this dramatic summit situated on the state line between Tennessee and North Carolina on the rugged crest of the Smokies. Reaching the peak won’t come easy — it requires a long, determined hike — but once on the precipice, you’ll be awed by its sweeping vistas and captivated by its fascinating history.

The trail climbs moderately as it parallels picturesque Cosby Creek. After a mile of hiking, the grade intensifies as the climb begins in earnest. At 1.3 miles, you will reach the first of a series of trail switchbacks. Be grateful for them — it’s better than going straight up!

Rock-hop across what remains of Cosby Creek, now just a small branch trickling down the mountainside, at 2.4 miles. A lung-busting half mile later, take a well-deserved rest at Low Gap. You have now reached the crest of the Smokies on the North Carolina-Tennessee state line.

At the gap, a trail sign denotes a junction with the storied Appalachian Trail, a footpath that spans more than 2,000 miles between Georgia and Maine. Turn left and follow the AT and its white rectangular blazes — you guessed it — uphill.

Don’t despair; the arduous ascent persists only a half-mile further. At 3.5 miles into your hike, the trail levels to a few ups and downs that barely register compared to the climbing now behind you.

At mile 5, veer left off the AT onto the Mt. Cammerer Trail, and allow your anticipation to grow. After one last half mile of easy hiking, arrive at your long-awaited reward.

Mt. Cammerer is crowned with a historic fire lookout tower. The quaint stone structure resembles a turret on a medieval castle. It sits atop a rock outcropping at the edge of a cliff that drops precipitously to the Pigeon River Gorge some 3,000 feet below.

Constructed by the Civilian Conservation Corps between 1937 and 1939, the tower was used to detect smoke among the surrounding slopes and valleys. Tower lookouts would relay the location of suspected blazes to firefighters below who would be sent to the scene. By identifying them early, the small fires could more easily be managed and prevented from growing into raging forest fires.

The men and women who staffed the Mt. Cammerer lookout lived inside the tower itself — its interior hosted a bed, cook stove and basic necessities for a rustic residence atop the remote peak. One tower operator once inhabited the lookout for 18 straight days before a break in duty.

The tower was decommissioned in the 1960s in favor of aerial fire detection. Abandoned, the structure fell into disrepair during the next three decades and was considered for demolition by the National Park Service in the 1980s.
Fortunately, in 1995, a full-scale restoration of the tower was undertaken. The project was the first initiative of a dedicated group of park supporters that ultimately became the Friends of the Smokies.

A stroll around the catwalk of the lookout tower reveals breathtaking views in all directions. The Great Smoky Mountains stand tall to the west, the Tennessee Valley stretches to the horizon in the north, and successive mountain ridges make up the highlands of western North Carolina to the east.

The return route to your vehicle is (mostly) downhill from here. Follow your steps the way you came to complete your hike.

That is, if you can bring yourself to leave the top of the mountain.

Directions: From the intersection of US Highway 321 and TN Highway 32 in Cosby, Tenn., drive TN 32 south 1.2 miles to the Great Smoky Mountains NP entrance. Turn right into the park and drive 2.3 miles to the Cosby Campground. Hiker parking is on the left prior to the campground information cabin.