The will against poverty: ASU students serve in rural Appalachia 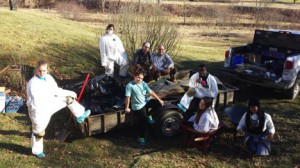 Jan. 19 marked the twentieth year since President Clinton passed legislation to encourage U.S. residents to volunteer on MLK Day. Rather than spending this holiday as a day off, many people gather in neighborhoods, towns and cities across the country for a “day on.” Universities are no exception.

Appalachian State University has celebrated with the MLK Challenge for sixteen years. Having participated in the challenge as a student, I couldn’t help but want to participate again. But I never knew I would serve by spelunking in a 79-year old woman’s crawlspace.

How does one get herself into a crawlspace in the first place? Dr. King has something to do with it: “There is nothing new about poverty. What is new is that we now have the techniques and the resources to get rid of poverty. The real question is whether we have the will.” I suppose I can say I had the “resources,” though they are not what you are thinking. As for the will:

Anna Mae Shook of Zionville, N.C., applied to our High Country Home Energy Contest in November. She is spending close to 20 percent of her monthly income on her utility bill, which ranked her as one of our ten contest finalists. She was ecstatic to be considered. Yet, upon a walk-through assessment of her home, Appalachian Voices energy policy director, Rory McIlmoil, and Energy Contest business partners Sam Zimmerman and Sarah Grady of Sunny Day Homes found her home in disqualifying condition. She had a kerosene leak (which saturated her crawlspace), mold contamination and rotten flooring.

Despite not being eligible, the Energy Savings team felt we should help her in some way independent of the home energy makeover contest. I felt we could pull it off, and Sam Zimmerman, having assessed her home before, felt the same. Zimmerman wanted to donate his expertise but he expressed that we needed as many hands as possible. “Where are we going to find ten or so people to do this?”

Then it dawned on me — the ASU MLK Challenge would be equipping groups of ten students to perform service across the county in the coming week. In a matter of days, we made a plan to collect donations and muck-out the crawlspace with a team of students from ASU. 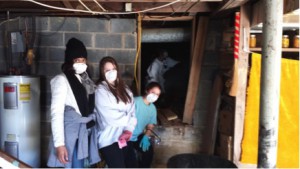 On Monday morning I met the group and saw that we were five short of the help we needed. Some were not dressed for getting dirty, much less for crawling under a house. Jim Street, a sixteen-year MLK Challenge alumni and their faculty service advisor for the day chuckled and said, “You should have seen those girls’ mouths drop when they heard ‘crawlspace’ and ‘spelunking.’” I just thought about the old MLK Challenge mantra, and retorted “It’s all a part of the challenge.”

By noon, we left town for Mrs. Shook’s house with a 12’x12’ piece of carpet from Abby Carpeting, safety equipment from Boone Area Missions, and promises of ply board and 2”x10’ boards from Watauga Building Supply, all of which were donated.

Seeing the crawlspace, the students were apprehensive. Who wouldn’t be when confronted with kerosene-saturated soil and mold in a tight, dark space? Some stayed outside, shuttling the contaminated soil to a dump trailer and others scrambled right in. Zimmerman and two students, Jelani Drew and Anne Carpenter, acted as the “miners,” digging out the kerosene-saturated soil. “Crawling in a crawlspace was not something I thought I was skilled at but it was not as scary as I thought,” said Carpenter.

By 4 p.m., we had removed the saturated soil, sprayed a bleach solution for mold, and spread a plastic liner to act as a moisture barrier, finishing our project in the crawlspace. Meanwhile Rory McIlmoil worked upstairs to repair Mrs. Shook’s floor for the rest of the evening. By the next weekend, he had re-floored the room and installed the donated carpet. Of course, the work would have been in vain had Mike Green, a local oil-monitor repairman, not stopped the kerosene leak for no charge. 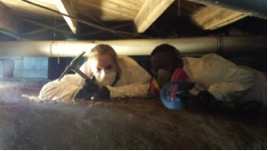 Knowing that some of the students wanted to serve at the nursing home or the humane society, their service advisor Jim Street asked them if they felt their service site was a “winning ticket” after all, and to my surprise, they all felt so. Reflecting on the day of service, Carpenter noted, “We might not have been skilled but we brought a desire to serve an area that we really do impact with our choices — despite being in a campus bubble at times.” She felt our service was a great point of growth for everyone, including herself. “I’d go back under,” she said.

Mrs. Shook was extremely grateful and I was so glad the students had an opportunity to leave their campus bubble to serve in rural Appalachia for a day. I hope that they too now carry the mantra, “It’s all a part of the challenge.”