{ Editor’s Note } This post by Amy Adams also appeared as an op-ed in the Winston-Salem Journal on Sunday, Feb. 1, marking the first anniversary of the Dan River coal ash spill. 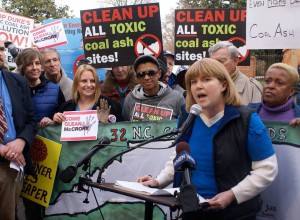 It’s been exactly one year since the infamous broken pipe at Duke Energy’s Dan River steam station spewed 39,000 tons of toxic coal ash into the scenic Dan River, just a few miles upstream of the drinking water intake of some 160,000 people. Since then, much attention has been given to the river and to the problems of leaking, unlined coal ash pits across North Carolina.

What hasn’t received attention is a threat much more menacing to the Dan River. Sitting only 35 miles upstream from the shuttered Dan River plant is Duke’s Belews Creek steam station in Walnut Cove, and one of the largest coal ash impoundments in North Carolina and the entire Southeast. Compare the 342-acre active goliath at Belews to the 39-acre impoundment at the Dan River plant, and it’s easy to understand the implications.

At Belews, a 14-story high earthen dam holds back 4.1 billion gallons of toxic coal ash. That’s more than 20 times the holding capacity of the Dan River site. The dam at Belews is rated by the U.S. Environmental Protection Agency as “high hazard,” meaning loss of life and property are probable if it failed. The EPA also ranks the dam as being in only fair condition. If it were to break, the Dan River would again be flooded with toxic coal ash, only this time on a scale on par with the Kingston, Tenn., disaster in 2008.

Aside from the threat of a catastrophic spill, the Belews Creek plant has a history of pollution that harms waterways and wildlife, including documented groundwater contamination. In addition, the plant dumps its wastewater directly into the Dan River under state-issued permits. It is currently part of ongoing litigation for violations of the Clean Water Act, its wastewater permit and North Carolina law.

Downstream from the massive Belews Creek plant is the town of Madison, which gets its drinking water from the Dan River, as does Eden and the Virginia localities of Danville, South Boston and Halifax County. Eden, whose water intake was spared any impacts from last year’s spill, withdraws close to 12 million gallons a day from the Dan River to serve residential customers and three major industries: Miller Brewing, Hanesbrands and Karastan Rug Mills.

Living next to this industrial mega-site are residents of Walnut Cove and Pine Hall, communities whose concerns include not just the wet ash impoundment and dangerous dam, but several other on-site landfills containing dried coal ash. While the N.C. Department of Environment and Natural Resources has spent the last weeks rearranging the who’s who of its upper management, these communities, like others across the state, are waiting to find out if the agency will ever clean up the sites.

According to the state’s new coal ash law, passed earlier this year under mounting pressure from citizens, DENR must set the “priority level” of each site by the end of 2015. So far, four sites have been identified as high priority — but not Belews Creek. If it’s ultimately deemed to be a “low priority” site, the ash could be left in the existing unlined pit in the ground and simply covered with plastic. This is not an acceptable solution for the residents around the plant who depend exclusively on wells for their drinking water.

Covering the ash does nothing to stop the toxic metals from entering the groundwater beneath the unlined pit. It’s equivalent to trying to stay dry under an umbrella while sitting in a puddle.

The communities living under the shadow of Belews deserve to be more than a low priority. In fact, no community in North Carolina should be considered a low priority. On the anniversary of the Dan River spill, we should make the removal of coal ash from all unlined coal ash sites and therefore, the assurance of clean, safe water to our communities, our top priority.