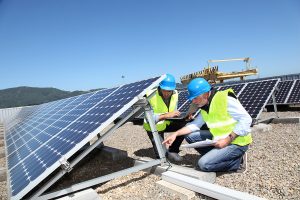 According to a report by Environment North Carolina, the state ranks fourth nationally for installed photovoltaic solar power in 2013. Solar Panel image from Bigstock

During the last business hours of 2014, the N.C. Utilities Commission issued a decision with big implications for the state’s strong solar industry.

The ruling wasn’t exactly a fireworks display for clean energy, but it does allow solar developers to start the new year on steady footing. On Dec. 31, the commission renewed a set of rules governing the contracts between electric utilities and independent power producers despite objections from North Carolina’s largest utilities.

The order requires that state utilities provide standard contracts for buying electricity from independent producers such as solar companies, methane-to-energy operations and some hydroelectric facilities. According to the order, all qualifying facilities that generate 5 megawatts of power or less are eligible for standard contracts in five,10 or 15-year periods.

Duke Energy and Dominion Power had requested that the Utilities Commission reduce the cutoff for standard contracts to 100 kilowatts and require any power generators over that limit to negotiate custom contracts with the utilities. Solar energy proponents argued that negotiating custom contracts with Duke and Dominion would cripple solar development in the state. Instead, solar advocates had proposed extending the cap from five to 10 megawatts and extending maximum contract terms from 15 to 20 years.

Jim Warren, director of the pro-clean-energy organization NC WARN, expressed disapproval with the Utilities Commission’s decision not to expand the standard contracts to apply to larger solar installations.

“Prior to July hearings, during the hearings, and since the hearings, solar industry companies have made clear that Duke Energy’s practices are already seriously harming them – and that they need regulators to improve contract conditions in order to force Duke to quit stalling large independent solar projects,” he said in a press statement.

Other renewable proponents were encouraged that the state commission didn’t bow to utility pressure to weaken the rules.

“We’re pleased that the Commission rejected attempts by Duke Energy and others to roll back long-standing policies that allow independent solar power producers to compete in a market that is dominated by monopoly utilities,” Katie Ottenweller of the Southern Environmental Law Center commented in a press statement.

The renewable energy industry also requested that the utilities pay more for the energy they buy from independent solar developers to reflect the social and environmental benefits of solar power. In turn, the utilities asked to pay less to reflect the extra cost of connecting independent solar power sites to the grid. The Utilities Commission rejected both requests and ruled that it was premature to change the payment rates.

Ottenweller also noted that the commission left the door open to considering the social and environmental benefits of solar in the economic calculus in the future. “In [the] order, the Commission recognized the potential for solar energy to bring major benefits to North Carolina customers, and signaled a willingness to make utilities pay fair value to independent solar power producers once those benefits are quantified,” she said.