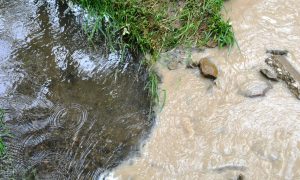 Water flowing from one of the discharge points in eastern Kentucky where Frasure Creek Mining was turning in false water monitoring reports.

Last week the Kentucky Energy and Environment Cabinet filed an administrative complaint against Frasure Creek Mining for hundreds of violations of the Clean Water Act at its mines in eastern Kentucky.

The filing comes just days before the end of the 60-day waiting period following an intent to sue letter sent by Appalachian Voices and our partners to Frasure Creek and the cabinet last November. Our notice letter described our discovery that the coal company had falsified pollution records over the course of 2013 and 2014, racking up almost 28,000 violations that state regulators failed to notice.

The cabinet’s filing includes all of the violations identified by Appalachian Voices and our partners. Under the Clean Water Act, the state’s action essentially preempts our ability to pursue a federal lawsuit.

Four years ago, when we first revealed that Frasure Creek had been falsifying records, the cabinet preempted our lawsuit by reaching a settlement with the company without our knowledge or participation. Later we were allowed to intervene in the settlement between the cabinet and Frasure Creek, a right which was upheld by the Kentucky Supreme Court.

Because the cabinet only filed a complaint and not a settlement in the latest case, we do not know how vigorous its enforcement will be. But if past enforcement is any guide, then one could expect it will not be very strong. The cabinet’s earlier enforcement actions against Frasure Creek were so paltry that they were thrown out in a recent court ruling, and were clearly not strong enough to ensure that Frasure Creek was in compliance since the company returned to submitting false water monitoring reports.

We will have to wait and see if the cabinet is going to take its responsibility to protect the people and water of Kentucky from dangerous pollution seriously. In the meantime, Appalachian Voices and our partners will continue to do whatever we can to ensure that Frasure Creek and other polluters are held accountable for their actions.