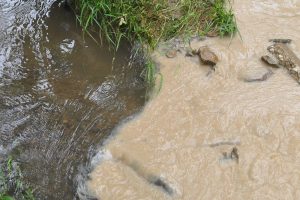 Water flowing from one of the discharge points where Frasure Creek Mining was turning in false water monitoring reports. Floyd County, Ky.

For the past four years, as Appalachian Voices and our partners in Kentucky have peeled back layer after layer of wrongdoing by Frasure Creek Mining, we’ve grown increasingly appalled by what the company has gotten away with right under the noses of state regulators.

So it was an important victory late last year when Judge Phillip Shepherd ruled for us in our pending cases against the company and the Kentucky environmental cabinet. One sentence from his ruling said it all:

“When one company so systemically subverts the requirements of law, it not only jeopardizes environmental protection on the affected permits, it creates a regulatory climate in which the cabinet sends the message that cheating pays.”

The Kentucky cabinet has, of course, appealed the ruling, so we have our work cut out for us this year. But the judge’s blunt summation of what happens when regulators fail to do their jobs highlights the importance of our work throughout a region where extractive industries have called the shots for too long.