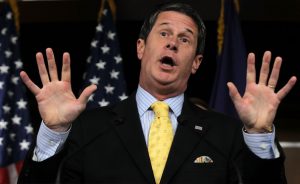 The new U.S. Senate couldn’t even make it one week before introducing a horrible bill. The 114th Congress began on January 6, and Sen. David Vitter (R-LA) only managed to restrain himself 24 whole hours before introducing legislation to weaken the Clean Water Act.

Sen. Vitter’s bill, S.54, would limit the Environmental Protection Agency’s ability to veto permits for mountaintop removal valley fills. It is our view that valley fills—in which the dirt and rock from blasting the tops off the mountains are dumped into streams and valleys—should not even exist. We’ve got the science to back that up. But Vitter and other coal industry allies in Congress want the fills to continue to be permitted, and want them regulated exclusively by the Army Corps of Engineers, completely removing the EPA from the process.

These coal industry advocates want the Corps in charge not because they think the agency has the same level of water quality expertise as the EPA, but because the Corps does not have the same expertise, and is therefore more likely to just hand out permits that pollute our water.

The big difference between this Congress and last Congress is that bills like S.54 have a chance at passing the Senate. Vitter’s bill is virtually identical to multiple bills that have been introduced in the past, but they didn’t get committee hearings, and never even came up for votes. This year, they probably will.

Thanks to years of hard work by Appalachian Voices and our coalition partners, we have champions in the Senate who will work to stop these dangerous bills from becoming law. Senate Republicans established a precedent over the past eight years that all bills need 60 votes to pass, and the coal industry will have a very difficult time finding 60 senators to vote for more mountaintop removal mining pollution. But we will have a fight on our hands.

President Obama is also expected to use his veto power to stop the worst bills from becoming law. We hope not to depend on vetoes, but if we can’t stop something bad from passing the Senate, the President is our backstop.

Our greatest hope for the next two years is that the White House takes advantage of its veto power and doesn’t let the threat of coal industry bills to prevent strong actions to stop mountaintop removal. Because there’s a lot left to do, and not a lot of time in which to do it.