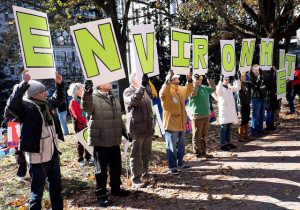 Get ready for a bumpy ride! The Virginia General Assembly started last Wednesday, and the stage is set for an interesting couple of months while legislators tussle over a slew of energy bills–some good, and some very, very bad.

During his State of the Commonwealth speech, Governor McAuliffe communicated the need to diversify our energy mix with carbon-free sources, noting that clean-energy policies lead to job creation and a stronger economy. So, Virginia legislators now have an opportunity to act on the governor’s leadership vision by following through with improvements to the state code. But will they? That’s the big question.

For context, this is the first session since the Environmental Protection Agency released, last June, the draft rule limiting, for the first-time ever, carbon dioxide from America’s power plants. Last year, we defeated a pre-emptive attempt by the Virginia legislature to cripple EPA’s authority on this issue, even before the draft was released. This year, we’re fighting against more dangerous proposals meant to keep Virginia from acting on the standards. But we also see bills that would advance solar energy, helping to close the gap between Virginia and some of our neighboring states.

Things can move fast during session, but as of today, here is the rundown:

SB 740 – This bill is one from the ALEC playbook, and it would derail the process for Virginia to comply with and benefit from the EPA’s Clean Power Plan. The task of planning the implementation of carbon pollution reductions currently rests with Governor McAuliffe’s administration, but this would require General Assembly approval before the plan could be sent to the EPA — which, given the viewpoint of this General Assembly regarding climate change, presents a substantial roadblock for reducing carbon pollution by the EPA’s June 2016 deadline. And if Virginia misses the deadline, it’s all but guaranteed that a federal plan to cut carbon would be imposed on the state, not taking into account direct input from Virginians. Stopping this bill is a priority for Appalachian Voices and our partners.

SB 741 – Extends tax credits and subsidies for the coal industry from the current end date in 2017 to 2022. A recent study that relies partly on the legislature’s own analysis showed that coal-related activities, including the subsidies, cost Virginia taxpayers $22 million in 2009, and that these incentives for the coal industry do not have any effect on the number of people employed in the industry, which responds much more to external market forces. Given the need for funding elsewhere in the coalfield region, including loans to start businesses and organizations that diversify the economy, the impact of these credits should be closely analyzed in the coming two years before they are renewed. The governor’s proposed budget caps and phases out these credits to help close the budget gap, but the best approach is to use those funds in ways that better serve the coalfield communities.

HB 2205 – The Virginia Coastal Protection Act. With our coastal areas among the most vulnerable in the U.S. to the effects of rising sea levels, this bill helps to address Virginia’s contribution to global warming pollution while raising funds that would in part pay for adaptation measures in oceanfront and low-lying places. By authorizing Virginia to join a multi-state initiative to control greenhouse gas emissions, this bill helps put Virginia on track to take advantage of job-creating carbon-free energy resources, while positioning us to meet the EPA’s carbon standard.

HB 1911 – Analyze the benefits of solar and nix the standby charges (aka, solar tax). This is a straightforward bill to end utilities’ monthly “standby” fees they charge customers with solar systems over 10 kilowatts who deliver solar energy back to the grid. The bill requires that the costs and benefits of having solar power on the grid be determined before such charges can be reinstated. At many times of the year, the energy produced by solar customers is more valuable than the credit they receive, and benefits the utilities enjoy of having that extra solar energy — like avoided costs for having to build new power plants — must be factored in for a fair and comprehensive valuation of distributed solar power.

HB 1636 – Provides for community net-metering for renewable energy projects. Many Virginians see solar as a smart investment but can’t use their own roofs: too much shade, they rent their home, etc. The solution is to subscribe to a community operated facility, allowing residents to share a solar garden or wind turbine. Solar advocates: see also SB 833 / HB 1912 on sizing-up the size of projects eligible for net-metering, and SB 1099 / HB 1725 creating the Virginia Solar Energy Development Authority.

There has never been a better time to get involved and express your views on these issues to your legislators. Now that session has begun, you can speak with their staffers easily by calling their Richmond offices.

We’ll stay in touch with you about ways you can speak up for clean energy solutions, and be sure to attend Virginia Conservation Network Lobby Day on Monday, January 26 for a big day of action!