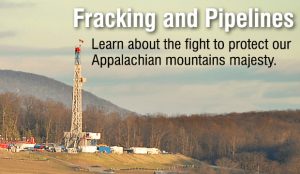 Appalachian Voices is launching new web pages today about efforts to open North Carolina to natural gas fracking and proposals to build massive natural gas pipelines through several Appalachian states. These proposals threaten public health, local communities, and the environment, and also could dramatically impede the growing efforts to shift to cleaner energy across the region.

Over the last decade, the natural gas industry has overwhelmed scores of communities across the country, building miles of new pipelines and erecting huge drilling rigs, sucking up fresh water from creeks and aquifers, and overrunning backroads and town streets with tanker trucks hauling chemicals and waste. Local and state regulations are either nonexistent, or insufficient to cope with the impacts.

As a result, the breakneck growth in the industry poses tremendous risk to public health and the environment. And a growing reliance on natural gas, a fossil fuel, could drastically delay America’s U.S. shift to cleaner, more sustainable energy sources.

Yes, burning natural gas for electricity has lower smokestack emissions of carbon dioxide than burning coal, but it should not be forgotten that the drilling process releases huge amounts of methane, a greenhouse gas that is more than 20 times more potent than carbon dioxide. Experts say the rise of natural gas as utilities’ fuel of choice runs counter to the carbon reductions we must make to keep climate change in check.

We can’t afford to invest in new natural gas drilling operations, power plants, pipelines or other infrastructure that would lock us into decades of relying on this fossil fuel, while shortchanging cleaner energy. The thing is, every dollar – public or private – invested in expanding natural gas production is one less dollar invested in truly clean, less carbon-intensive sources such as energy efficiency, and wind and solar power. Not only do these energy solutions translate to cleaner air and more protections for our water resources, they create new jobs and tremendous economic opportunity.

Last year, several massive pipelines were proposed generally running from West Virginia through Virginia, and one would go on through North Carolina. Citizens are taking action to oppose the projects out of concern about the impacts to private property, water resources, and some of Virginia’s most treasured historic and natural heritage sites.

And North Carolina recently lifted its long-standing state moratorium on fracking; Under the sway of the industry and its allies, the state has developed regulations that are wholly inadequate to protect communities and the environment. In response, a grassroots movement has sprung up to protect the state’s natural resources and push lawmakers to reinstate the moratorium.