Appalachian Power Company will impose a fee on homeowners with solar power systems exceeding 10 kilowatts. Most residential solar systems are not affected, but environmental groups decried the standby charge for its implications on future residential solar development. The charge also weakens the incentive for net metering, which allows a utility customer who generates their own electricity to sell surplus power into the grid.

Steve Zenman, founder of Virginia-based solar research nonprofit Zenman Energies, obtained approval from Fluvanna County in October to build a concentrated solar power plant. These utility-scale systems reflect sunlight from a large surface area into a small area to create steam that spins turbines, generating power. Zenman is developing a low-cost prototype, and will license the project as open-source to give other designers an affordable blueprint. If funding is secured and construction moves forward, he hopes to connect the plant to the Dominion Power grid.

In a $68.5 million deal, Swiss start-up Alevo Group plans to convert a Phillip-Morris cigarette plant in Concord, N.C., to manufacture a lithium-ion and graphite battery system called the GridBank. Alevo expects to create up to 2,500 jobs over the next three years. Made up of multiple battery cells, the system can store up to one megawatt-hour of energy, which will make renewable energy distribution more efficient. The first shipment of batteries will go to China by the end of this year, The Guardian reports.

In September, Duke Energy announced plans to invest in 278 megawatts of solar energy, all scheduled to be on-line by 2016. This will help Duke meet North Carolina’s Renewables Portfolio Standard, which requires investor-owned utilities to generate 12.5 percent of total electricity from renewables by 2021. While Duke invests in large-scale solar farms, the utility has indicated that it wants to pay homeowners less for the energy rooftop solar panels provide to the grid. This has had a chilling effect on rooftop solar installers, according the North Carolina Sustainable Energy Association.

Cellphones get a free charge in Knoxville, community solar on Tennessee horizon

On Market Square in downtown Knoxville, cellphone users could get a free charge from the sun in 15 minutes. The Tennessee Valley Authority installed their first solar-powered charging kiosk in October. It can charge up to six phones or tablets at a time and power devices for up to two days without sun. TVA’s next step in solar will fund a minimum 500-megawatt community solar project for a local power company. In another recent announcement, TVA said that they will buy up to 4 megawatts of solar energy at two cents above market rate from community solar projects built by local power companies. 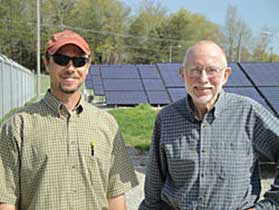 A community solar farm established in 2011 by Kentucky’s Berea Municipal Utilities doubled in size this past summer to 246 panels. A homeowner or business can lease a panel for $750 and be credited monthly for the energy generated by a solar panel. The utility has leased 31 of 126 new panels since July. In October, the solar farm produced almost 6 megawatt-hours of energy, enough to power about five average Berea homes.

A movement toward solar-purchasing cooperatives is helping more homeowners go solar. A minimum of ten people pledging to buy solar panels together get a discount on the parts, while local contractors competitively bid for the installations. Eleven communities in Virginia and seven in North Carolina have launched solar cooperatives. Solarize Chatham celebrated the highest support of any North Carolina Solarize program in November with 56 installations.