Entrepreneur Banks on the Sun 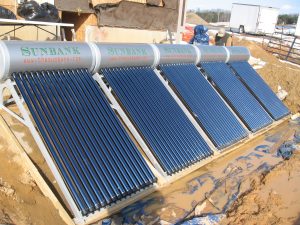 This Sunbank installation at Bethlehem Farm near Talcott, W.Va, is part of a radiant heating system on an energy-efficient house. Photo courtesy Sunbank Solar Water Heaters

The contraption looks like a piece of a tanning bed, exposed on a rooftop, leaning toward the sun. But rather than emitting powerful UV rays, these tubes capture them and heat water in a process called solar thermal, harnessing the sun’s energy at a rate that is more than five times more effective than most photovoltaic solar panels.

James Richards, solar entrepreneur, first experimented with solar thermal while working in Nicaragua for an organization that brought alternative energy and water filtration systems to impoverished communities. When he got back to his parents’ home in West Virginia, he took his research, refined it and produced the Sunbank, a sophisticated solar water heater that calls on an ageless concept: using the sun to heat water.

Richards counts himself as lucky to have found pockets of the community open to incubating his business in West Virginia. He anticipated a challenge, but found that was easy to overcome. “There aren’t much more conservative places,” says Richards. “It was a good test case.” The West Virginia legislature got rid of a $2,000 solar renewable energy credit last year. Although that did not affect the Sunbank, Richards called it a bad omen for solar in West Virginia. “People are pragmatic,” Richards says. “Public support will happen when it makes financial sense for them.”

At $3,000, the Sunbank costs thousands less than a solar panel, but is still a substantial investment in a state where the poverty rate is nearly 18 percent. In 2013, Richards received a fellowship to explore financing for the Sunbank on a large scale, which led him to move to California to work with experts and take advantage of the state’s progressive policies and support for solar.
While Richards has shifted his focus on pitching the Sunbank to commercial businesses that have a high demand for hot water, such as bakeries and breweries in his new home base of Santa Cruz, Ca., the inventory and distribution remains in West Virginia. The jobs in solar are in installation, says Richards, which he leaves to local contractors.