In a state known for coal, solar energy emerges through a grassroots effort

By Eliza Laubach
Dan Conant affectionately calls his first successes cutting solar installation costs “barn raisings.” After years of political organizing in college and shortly after, he wanted to use community organizing strategies for solar power. 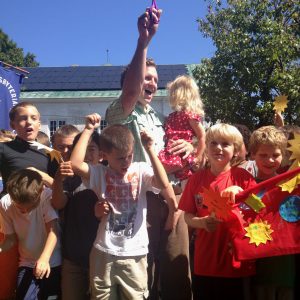 Policies that have helped to nurture the solar industry, such as affordable leasing options, tax credits and requirements for utilities to purchase renewable energy credits aren’t offered in his home state of West Virginia.

“I was trying to move back home, but there weren’t any jobs available at that point,” says Conant. He instead worked in Virginia and Vermont, helping pioneer innovative neighborhood-scale methods for going solar. He found ways to lower prohibitive upfront costs, which he describes as an effort to “crack the code for personal financing.”

As he gained a deeper understanding of solar financing, Conant saw how difficult it is for nonprofits and municipal organizations to buy solar panels, especially in West Virginia. Nonprofits don’t receive a tax credit, government entities are unable to take out loans, and commercial buildings receive less compensation than homeowners do for surplus power generated by their solar panels. After researching how to bring solar to these community groups with a model that could be duplicated in any state, he created Solar Holler.

He partnered with Mosaic Power, a company that pays homeowners for their hot water heater to be hooked up to Mosaic’s remote system. Creating a smart grid, Mosaic can then turn the hot water heater on and off in response to electricity demand. The utility pays Mosaic Power for helping them use electricity more efficiently, and the profit is transferred back to the homeowner through a $100 yearly payment. Residents can sign up for Mosaic’s program through Solar Holler, pledging their return to help fund a solar installation on a community building.

An investor will buy the solar panels after enough residents of a community pledge their revenue to a Solar Holler project to guarantee the investor a return. The pledged hot water heater payments will cycle to other Solar Holler projects once the initial project is paid off. “We’re using energy efficiency to fund the solar,” Conant says.

Conant launched the pilot project in his hometown at the Shepherdstown Presbyterian Church. The congregation considered solar in the past but could not afford it. Than Hitt, church member and community organizer, spent three years working with the congregation and Shepherdstown community. He provided the initial investment in the solar panels. “Self-reliance is a big thing in West Virginia and we’re tapping into that,” says Hitt.

Pastor Randy Tremba set up a table by the church’s hot water heater for people to sign up for the Mosaic Power program in April. “A trusted community leader is a crucial ally,” he adds. Within three months, enough people signed up for the program to guarantee the solar installation. 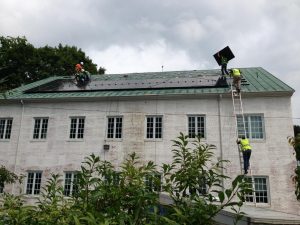 With 100 people signing on to participate, plus the sale of renewable energy credits to various Pennsylvania utilities, the project quickly moved forward. Mountainview Solar, a local solar contractor, installed a 16.2-kilowatt solar array on the church this past August, providing about 40 percent of the church’s electricity. The Shepherdstown Elementary School principal brought the fourth and fifth grade classes to the ribbon-cutting ceremony and pledged to incorporate solar energy into the educational curriculums. “I think it’s the start of something big,” says Conant.

Solar Holler’s goal is to have a project in each of West Virginia’s 55 counties within the next five years. Two more projects are currently underway: the city hall in Lewisburg and the public library in Harpers Ferry, which achieved its quota for Mosaic Power sign-ups in mid-November.

Conant sees the importance in diversifying the economy of a state that has largely been powered by coal extraction. “We can still be an energy state, we just need to stop thinking of ourselves as a coal state,” he says. Ninety-six percent of West Virginia’s energy comes from coal, and mining has a continued legacy of destructive health, environmental and financial impacts. “Solar in West Virginia is more powerful than anywhere else in the country,” says Conant.