Energy efficiency at the forefront of cooperative principles in Tennessee 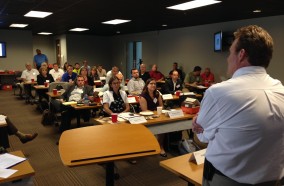 Rural electric cooperatives, which serve millions of families across Appalachia, operate on seven principles, the most important of which (at least to us) is principle number seven: “Concern for Community.”

The seventh principle commits electric co-ops to “the sustainable development of their communities through policies accepted by their members.” As we described in a blog series on the need for and benefits on “on-bill” financing programs supporting home energy improvements in Appalachia, the sustainable development of the Appalachian region relies on the ability of residents to invest in their communities. But first and foremost, they must be able to afford their electric bills. The clear first step to achieving this vision is expanding energy efficiency, and this is something that Tennessee’s electric cooperatives have taken to heart.

On September 5, thanks to a generous grant from the National Governor’s Association (NGA), the Tennessee Electric Cooperative Association (TECA), in partnership with the Tennessee Department of Environment and Conservation (TDEC), sponsored a statewide energy efficiency “retreat.” The goal of the day-long policy retreat was to hash through the details of what will hopefully become a statewide program to finance home energy efficiency improvements, especially for low-income residents. Such programs have proven to reduce home energy costs substantially, and are primarily intended to help families that can’t afford to pay for the upfront cost of needed improvements. Below is a testimonial from one family that participated in South Carolina’s pilot on-bill financing program known as “Help My House.”

Most importantly, the retreat was attended by six of Tennessee’s rural electric cooperatives. Included among them was Appalachian Electric, which has proven to be a statewide leader in expanding energy efficiency opportunities not only for their own members, but for all of Tennessee’s rural co-op members. Unfortunately, of the six co-ops that participated in the retreat only two co-ops were from the Appalachian region, although we were told by TECA that a handful of others couldn’t attend but were interested in participating in the process. We hope that more co-ops with service territories in East Tennessee will sign on to the process, because as the energy cost maps we generated earlier this year show, members of Appalachian co-ops are most in need of support for reducing their electric bills.

The efforts of Appalachian Voices’ staff, through concerted outreach to Tennessee’s Appalachian electric co-ops and local stakeholders, played a key part in making the energy efficiency retreat happen, and as a result we were invited to participate as an expert stakeholder. We are extremely encouraged by the outstanding leadership that NGA, TECA, TDEC and Appalachian Electric are showing, and we admire their dedication to helping the families who need it most.

The prospect of a statewide on-bill financing program in Tennessee is exciting, and we remain committed to doing everything we can to seeing it through. Further, we appreciate everything you do to support our work. If you live in western North Carolina, get in touch, because we have a lot going on in your neighborhood too!