The Deadline is Set for EPA Coal Ash Rule 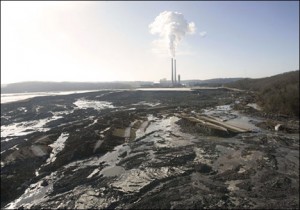 The EPA must finalize federal rules regulating the disposal of coal ash by Dec. 19, 2014. The deadline is the result of a settlement between the EPA and a coalition of environmental groups.

By the end of this year, the EPA will finally publish the first-ever federal rule regulating the disposal of coal ash. The agency’s Dec. 19 deadline is the result of a settlement reached today in a lawsuit brought by Earthjustice, representing a coalition of environmental groups including Appalachian Voices, Southern Alliance for Clean Energy, Kentuckians for the Commonwealth and others.

After five years of delays, multiple rounds of public comments, and mounting evidence of environmental cost and damage to human health from storing coal in unlined ponds and landfills, the rule needed to protect clean water and human health is now in sight. But we only have a date, the rules are yet to be written.

The coal ash spill at TVA’s Kingston plant in 2008 was the alarm bell that drew public, media, and the government’s attention to the very real dangers of this toxic byproduct of coal-fired power plants.

The constituents of coal ash include mercury, selenium, arsenic, lead and others. Storing coal ash in unlined ponds or landfills gives the toxic components the ability to infiltrate into ground waters and contaminate drinking water wells. Contaminated groundwater can also discharge into neighboring streams that may serve as drinking water sources as well as recreational areas for fishing and swimming.

The EPA, states including North Carolina, environmental groups and researchers have documented hundreds of cases of coal ash contamination. In 2010, the EPA considered regulating coal ash as a hazardous waste, the stronger of the two options the agency proposed. But after a lengthy review by the Office of Management and Budget (OMB) and the Office of Information and Regulatory Affairs (OIRA), along with pushback from the powerful coal industry, the EPA was asked to consider regulations that would regulate coal ash as solid waste, but not as hazardous.

The interference from OIRA and industry pressured the EPA to modify its proposal based on politics and profit, not on sound science. This is a flawed process that shuts the public out of a black box process. The Center for Effective Government stated:

“It’s almost as though the process is designed to create less protective rules. An agency spends months, sometimes years, writing regulations consistent with statute and responsive to some public need, only to be second-guessed by those without the substantive or technical expertise possessed by the agency that proposed the rule. It’s like replacing all the plumbing in your brand-new house after the walls are painted and the carpets installed – and your plumber is actually an electrician!”

It seems logical that the regulations meant to protect human and environmental health would acknowledge this waste stream as hazardous and regulate it as such. Communities near coal plants have suffered years of increased rates of cancer, neurological disorders, respiratory ailments and other health concerns waiting on the EPA to regulate this threat.

Coal ash is the nation’s second largest industrial waste stream and the benefits of a strong rule regulating where and how it is stored would be immense. The law, strong science and good public policy all support regulating coal ash as a hazardous waste. Will the EPA stand up for environmental and public health?

Click here to learn more about coal ash and stay up-to-date with the rule-making process.