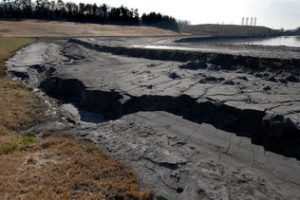 Where is the line? N.C. regulators say they’re proactive on coal ash, while Gov. Pat McCrory sits on a bill to weaken state standards and protect polluters from future lawsuits.

In recent months, but only after prolonged pressure from concerned citizens and environmental groups, it seemed the N.C. Department of Environment and Natural Resources was finally ready to take Duke Energy to task over coal ash pollution.

But when DENR and Duke put forth a proposed settlement that came with a fine of just $99,000 and the requirement that Duke assess the sources and extent of contamination, dreams of adequate enforcement that will protect communities from coal ash quickly crumbled.

The period for public comment on the proposed settlement ended on August 14. A day before that deadline, DENR said it had received 207 individual letters and 4,421 form letters. Fortunately, the Wake and Mecklenburg county Superior Courts are allowing the Catawba Riverkeeper Foundation and other groups represented by the Southern Environmental Law Center to become formal parties to the settlement, giving them a say in the agreements’ final form.

Two days after the comment period ended, DENR came out with a curve ball and announced it will seek injunctions against 12 more Duke Energy coal-fired power plants where ash has polluted water. Here’s to hoping the new cases won’t follow the trajectory of those that are further along.

Mirroring earlier suits, a statement from DENR came with the reminder that, if not corrected, coal ash pollution poses “a serious danger to the health, safety and welfare of the people of the state of North Carolina and serious harm to the water resources of the state.”

Bruce Henderson of The Charlotte Observer reports that all 14 of Duke’s North Carolina coal plants are now the targets of state litigation:

“The two lawsuits filed in Mecklenburg and Wake counties Friday cite groundwater pollution at all 12 of the plants and illegal seepage from ash ponds at most of them. Among them are Allen on Lake Wylie in Gaston County and Marshall on Lake Norman in Catawba County.”

Frank Holleman, a senior attorney with the Southern Environmental Law Center told The Charlotte Observer that last Friday’s filings “confirm what we had been saying, that coal ash disposal is being conducted illegally and is polluting North Carolina’s natural resources.”

SELC and other groups involved, including Appalachian Voices and the Catawba Riverkeeper Foundation, insist that DENR knew about the pollution for years but did nothing until citizen pressure and media attention forced the agency to take action.

DENR Secretary John Skvarla defended his agency in the News & Observer earlier this month, saying that any claim that “DENR has dismissed peoples’ concerns about coal ash discharges is simply untrue.”

Either way, the actions of the state’s legislature reveal just how confused and contradictory regulators and legislators can be when it comes to coal ash. Despite Skvarla’s claims that DENR is proactive in protecting communities from coal ash, the General Assembly has repeatedly attempted to weaken state standards.

Gov. Pat McCrory, who appointed Skvarla, is debating whether to veto House Bill 74, a 68-page “sweeping hodgepodge that’s hard to characterize,” according to North Carolina director for the Sierra Club Molly Diggins. Like an earlier bill in the Senate, HB 74 includes a provision that would allow a landowner to pollute groundwater up to their property line. In the case of coal ash contaminating groundwater, that could be a difficult line to draw.

As we wrote previously, the bill shifts the focus from preventing coal ash pollution to the inevitable cleanups and prefers imagined future problems to the reality of current ones.

Jon Risgaard, a DENR official, told the News & Observer that he doesn’t think the bill would further endanger the state’s environment, but is not sure if DENR has an official stance.

Through our Red, White & Water campaign, Appalachian Voices is pressuring North Carolina and the federal government to protect Americans from coal ash pollution by enacting strong rules governing the disposal of the toxic waste.