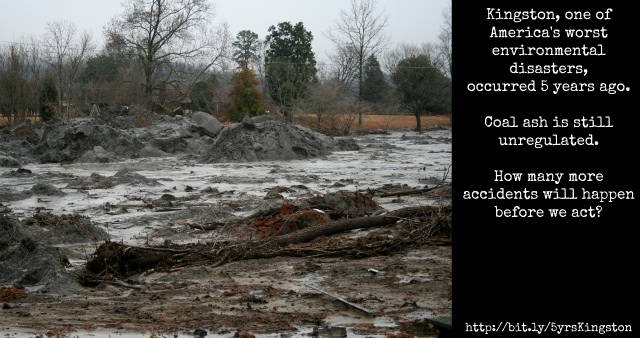 It has been five years since the TVA Coal Ash disaster in Tennessee, which sent 1.1 billion gallons of toxic coal ash into Emory and Clinch rivers. While the nation has watched and petitioned the U.S. Environmental Protection Agency, the agency responsible for issuing federal standards for coal ash disposal, little action has been taken. Perhaps this is similar to the old adage that says “a watched pot never boils.”

On Dec. 22, 2008, the spill alerted many for the first time to the very real threat posed by coal ash impoundments, which can range from 100 to 1,700 acres. While the Kingston spill brought the issue to the forefront, there are also concerns that extend past the threat of a singular catastrophic spill. The slow leakage of contaminated waste into ground and surface waters from unlined coal ash impoundments and landfills has become a major issue across the country, and across the Southeast in particular. Coal ash toxics have leached from impoundments and landfills carrying heavy metals into streams, creeks, lakes and drinking water wells.

As reported by Physicians for Social Responsibility and Earthjustice, coal ash contain some of the world’s deadliest toxic elements, including arsenic, lead, mercury, selenium, cadmium, and chromium. All of these toxins pose serious health threats and can cause damage to organs, and contribute to birth defects, and cancer. People living within 1 mile of unlined coal ash ponds can have a 1 in 50 risk of cancer—more than 2,000 times higher than what the EPA considers acceptable.

How much longer must Americans wait? How many millions of gallons of toxic coal ash must be released into our waters and how many people must suffer the health consequences before EPA finally issues coal ash regulations? It is a question that has waited five years without an answer. Will 2014 be the year EPA finally takes action?

Five years after the TVA coal ash disaster, what do we have to show for it? Check out this timeline charting the past half decade of global progress, and EPA inaction on coal ash.