The Forest’s Bread and Butter

Bring down the mast. But hold on seafarers, leave the sails flying. In the forests of Appalachia, this lingo doesn’t refer to sailing. Instead, it’s used by outdoor folk to describe the fruits of plants and trees, with blackberries, strawberries, blueberries, hickory nuts, walnuts and beechnuts constituting just a few. Although these mast types are important forest resources, forgetful squirrels, scurrying mice and gobbling turkeys are among those responsible for spreading the forest’s most potent protein bundle, the gift of oak trees: acorns.

While some acorns bud into the world lean and slender, others are more round and plump, yet they all sport a similar toupee-like casing. If you’ve been popped on the head by some nut that then goes skipping down the street, you’re familiar with acorns, or maybe you recall skating along the sidewalk as acorns rolled under your shoes. But acorns do more than cause pedestrian anxiety. 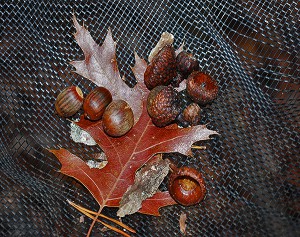 A net beneath an oak tree in North Carolina lets researchers study the season’s acorn yield and how it affects the forest. Photo by Julia Kirschman. USDA Forest Service

Acorns are often referred to as “a keystone species of the forest” because of the critical role they play in ecosystem dynamics. Rodents feed heavily on acorns and, in turn, predators such as foxes and hawks prey on rodent populations plump from acorn feasting.

Acorns, however, serve a bigger purpose than being a hot menu item for rodents such as the white-footed mouse. It also has an appetite also for the larvae of gypsy moths, an introduced pest of European and Asian descent, which, because of the larva’s fondness for oak and aspen leaves, decreases tree growth, survival and mast production. But with more acorns come more mice. And more mice leads to fewer gypsy moths and fewer gypsy moths equates to more oaks. In essence, large acorn crops support large mice populations and shield mature oak trees from the troubles brought by destructive gypsy moth outbreaks. The moth is omnipresent in the northeastern United States and in parts of North Carolina, Virginia and West Virginia, and could expand farther south and west, which would put more trees at risk of defoliation.

Deer and black bears depend on acorns too. In fact, if a pregnant black bear doesn’t consume enough acorns in the fall, her embryo is less likely to fully develop, and even if her cubs are born, she won’t be able to make enough milk to feed them. And don’t forget the oaks themselves. “Of course, acorns are the seeds to future oaks,” says USDA Forest Service Southern Research Station’s Dr. Katie Greenberg. This year, however, her meanderings in the mountains of western North Carolina have less of a crunch than in years past.

“Around here, [acorn] production seems to be low,” says Greenberg, who adds that, for oak species, “this year appears to be a pretty bad year for everything.” According to biologist Gary Norman of Virginia’s Department of Game and Inland Fisheries, “[Virginia is also] experiencing a significant mast failure” and West Virginia “reported their mast index was the lowest they’ve recorded in the survey history.”

Similar to the West Virginia surveys, Norman’s research at Virginia study sites shows that this year’s acorn production in both white and red oak species is the lowest it has been in the last six years. This fall, acorns covered only 5 percent of white oak tree tops, while red oaks boasted a slightly higher count at 8 percent. In 2012, the same surveys showed 58 percent tree top coverage in white oaks and 65 percent in red oaks, dwarfing this fall’s numbers.

So what’s the deal with these oaks? Were their heads in a cloud during reproductive season? Not exactly, though clouds might have held some influence. “This year [the acorn shortage] could be because we’ve had so much rain in the spring and in the summer,” says Greenberg.

The problem with too much rain is that it makes pollen soppy, and wet pollen stubbornly resists being blown by the wind — a step necessary to pollinate other oaks. Drought conditions and late spring freezes can kill oak flowers and inhibit acorn production as well. But in the end, “there’s a mystery element with oak trees,” says Greenberg. Though the weather is likely a player in this year’s low acorn crop, Greenberg notes that acorn production tends to be erratic. Norman’s surveys bear witness to this notion. Virginia’s white oak species produced low acorn mast in 2007-2009 and 2011, but had significantly better masts in 2010 and 2012.

So like some days of sailing, some mast seasons are good, some bad, and some just plain nutty.