Fighting for RGGI and the climate 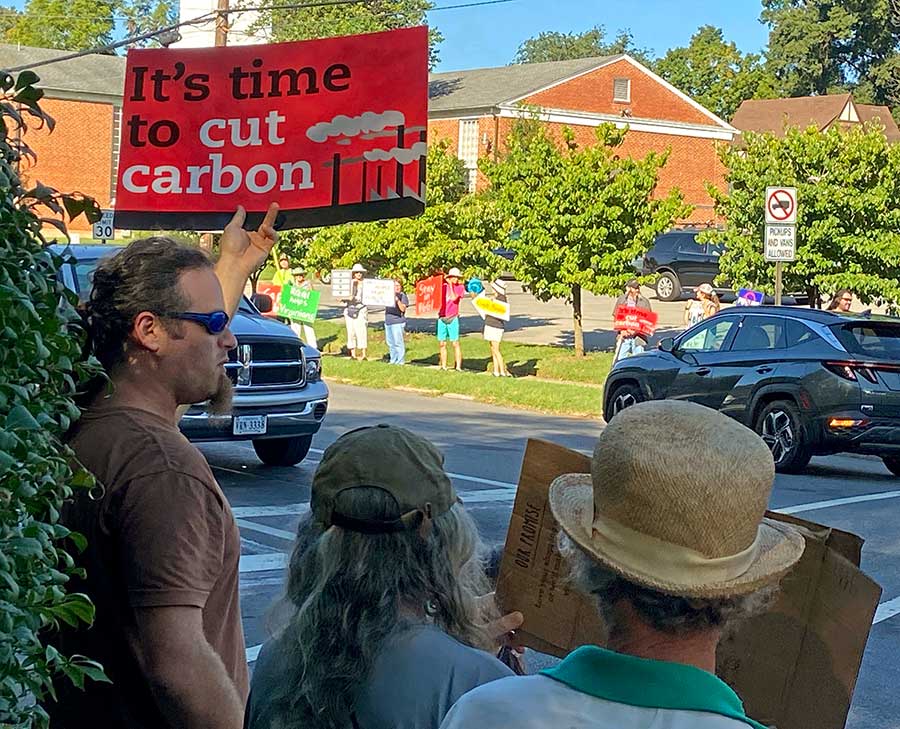 Recently on Aug. 31, I attended one of the six Virginia climate rallies in support of the Regional Greenhouse Gas Initiative. I gathered with activists and dedicated members of the community bright and early outside a State Air Control Board meeting at Reynolds Community College in Richmond to protest Gov. Youngkin’s unlawful attempts to remove Virginia from the Regional Greenhouse Gas Initiative through the Air Board.

Since his inauguration in January, Gov. Youngkin has attempted to repeal RGGI, a 11-state climate initiative that puts caps on carbon emissions as well as brings in revenue to support Virginia communities. In Virginia’s first year in RGGI, the program raised $225 million for the state, which has gone to both the Virginia Community Flood Preparedness Fund and energy-efficient affordable housing. Youngkin’s efforts to pull the state out of the compact have inspired opposition across Virginia, and on Aug. 31 nearly 300 of us showed our strength and care as we gathered in Abingdon, Harrisonburg, Richmond, Roanoke, Virginia Beach and Woodbridge.

I attended the Richmond event, which was my first RGGI rally. Going into it, I did not know what to expect, but I quickly discovered the community and atmosphere were immensely inspiring and caring. As I walked through the parking lot to the group of protesters outside the Air Pollution Control Board meeting, I found a larger-than-life papier-mache of Andrew Wheeler, an advisor of Gov. Youngkin and critic of greenhouse gas limits, puppeting an activist in a Glenn Youngkin mask. A group of activists danced alongside the puppet of Youngkin to the song “Puppet Man” by Tom Jones, an enthusiasm that permeated throughout the rest of the rally. 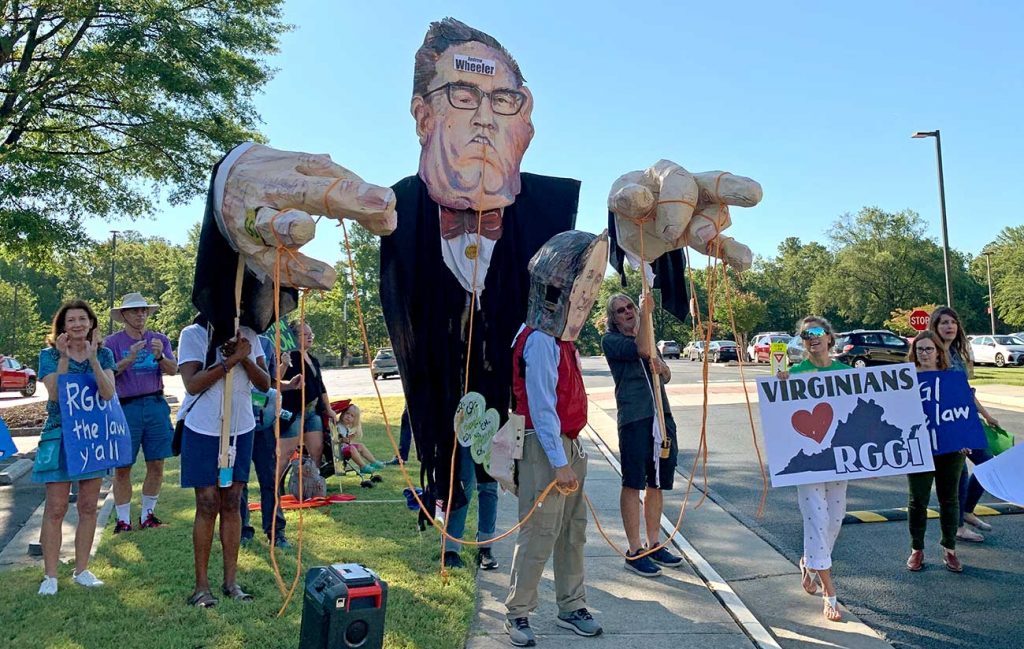 Throughout the rallies across the state there was a strong balance of levity and seriousness. Moments of song and chant were followed by speeches about concerns regarding the impact of leaving RGGI and the motivation to remain. I talked to individuals of all different backgrounds about their goals and priorities for coming together. The most common sentiment I heard was frustration. Between the activists employed in conservation efforts and community members dedicated to climate action, there was a present feeling that Youngkin did not understand the consequences to low-income communities of withdrawing from the program, nor the impact that increased carbon emissions could have on the commonwealth.

Leah Jones of Virginia Interfaith Power and Light spoke at the Richmond rally on how important RGGI is to low-income Virginians.

“RGGI is more than a greenhouse gas initiative,” Jones said. The energy efficiency funding, for example, reduces household energy costs, while giving some people more room “to provide for your family instead of paying electric bills.”

We were also lucky enough to hear from other great speakers like McKenna Dunbar from Sierra Club, who left us with the powerful note that leaving RGGI is a “direct push against the economy of Virginia and the health and well-being of its residents.”

While varying between marches, protests and drive-by rallies, the spirit of the six rallies was the same. A least two of the rallies had Latina speakers who advocated for climate action in Español. Each rally had signs saying “Stay in RGGI” and “Virginia loves RGGI.” Not every perspective was the same, but we were able to listen and learn from each other. I found myself seeing Richmond with new eyes as I began to understand what energy-efficient housing and flood prevention look like within the community. They are not privileges, they are necessities. 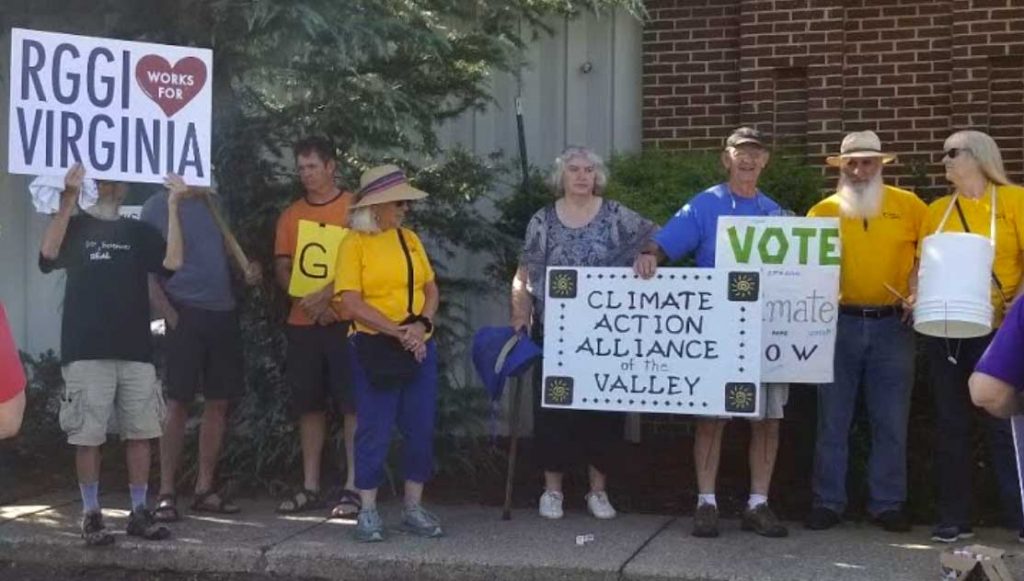 After communicating with activists at the five other rallies, I found that there was a lot of effort and coordination that went into the event. Individuals from Virginia Conservation Network, Virginia Interfaith Power and Light, Appalachian Voices, Third Act Virginia, Climate Action Alliance of the Valley, the Unitarian Universalist Church of Roanoke, CASA Virginia, the Virginia Chapter of the Sierra Club and the League of Conservation Voters worked together to bring out so many advocates for Virginia remaining in RGGI.

Writing this blog, many moments roll through my head that I will not soon forget, but the most powerful was all our voices coming together to sing this song: “People gonna rise like the water, gonna shut this crisis down, I hear the voice of my great-granddaughter saying ‘climate justice now.’” The power in this resonates deeply, because we do not only need to stay in RGGI for our friends and neighbors, but for future generations who will face the consequences. 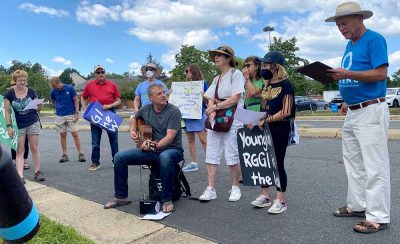 EDITOR’S NOTE: This August Appalachian Voices filed a public records lawsuit in Virginia related to the governor’s attempt to pull the commonwealth out of the Regional Greenhouse Gas Initiative.