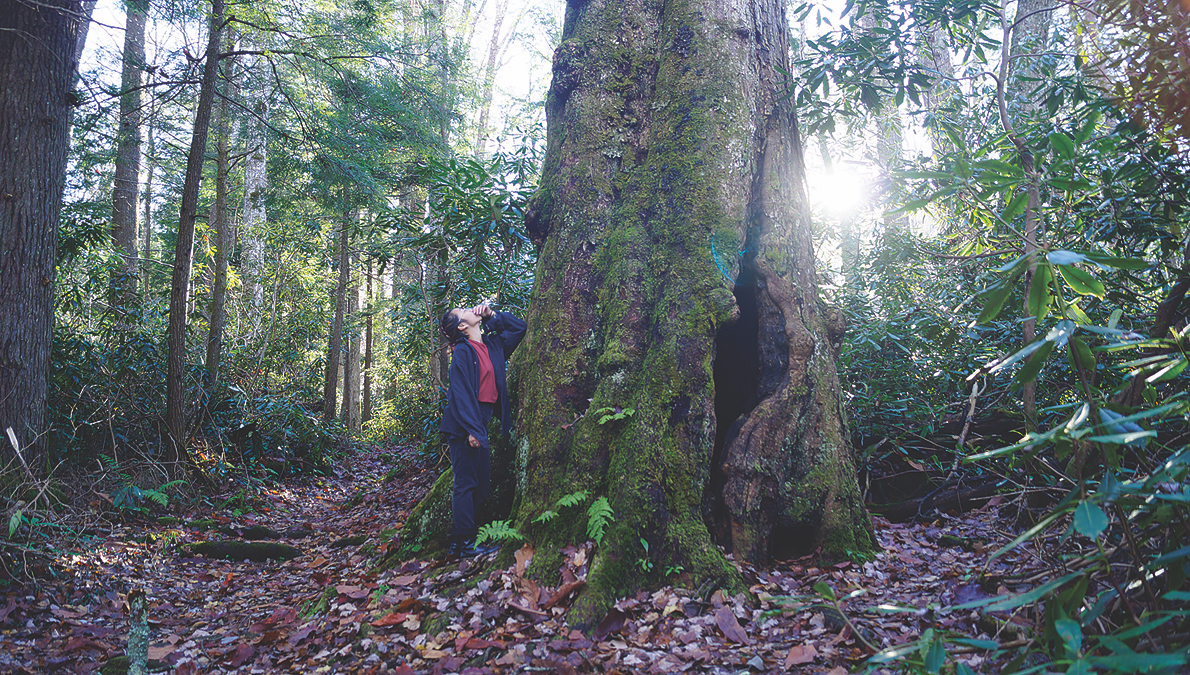 Hiker MJ Sanqui looks up at an enormous tree at Albright Grove. Photo by Eric Halvarson

Walking through an ancient forest is a rare experience for the average hiker like me. When I learned about a rare stand of original cove-hardwood forest on the Albright Grove Loop Trail in the Great Smoky Mountains National Park, I had to take a trip there.

My girlfriend MJ and I arrived at Maddron Bald Trailhead in the early afternoon after some GPS trouble. If you are using GPS, be careful that the final road leading to the trailhead is Baxter Road; some GPS listings of Maddron Bald Trail or Albright Grove Trail lead you far away from the parking for the trailhead. Luckily, local neighbors have set up signs that say,“Turn around, GPS is wrong,” for tourists like us.

The bright sky and lack of clouds made this Thanksgiving Day hike warm and pleasant. Other families also celebrated the holiday under the afternoon sun. 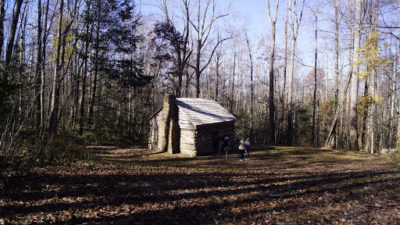 After walking for about 10 minutes, we passed Baxter Cabin. This single-room cabin sports a chimney and was constructed by Willis Baxter in 1889 for his son as a wedding present. Other hikers stepped inside, and as we continued our hike, we could hear them say “cheese” for their pictures.

The first mile of the hike ascends a wide gravel road. We walked alongside a stream and listened to the running water and the crunching leaves for a little over a mile. We came to a welcome rest stop and crossroad with signs showing we still had 1.7 miles to the Albright Grove Loop.

The road continued and the number of families on our route dwindled as the sun lowered in the sky. Eventually the road ends and turns into a single-path trail, only wide enough for one person at a time. This is where the trees really start to show their age.

The land here was previously owned by Champion Paper Company in Canton, N.C., now Evergreen Packaging. According to Great Smoky Mountains National Park Supervisory Forester Kristine Johnson, the grove might have been selectively logged for particularly large trees under the company’s ownership until the National Park Service acquired the land.

The national park was established in 1940, and today, some hemlocks and tulip trees on the trail are more than 200 years old. Soon, we found our first huge hemlock, a tree that made me stop and say “whoa” out loud! The lowest branch was at least 35 feet high and the trunk over five feet wide. 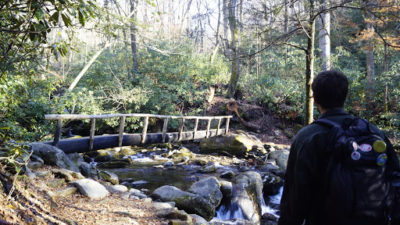 The author Eric Halvarson next to a bridge on the trail. Photo by MJ Sanqui

We began to look for some indicators of old-growth, like large trees, downed trees that fell naturally and a diversity of tree species. These traits indicate a healthy old forest that has avoided the axes of loggers in the past. We crossed Indian Camp Creek on a beautiful wooden bridge. After a total of three miles, we reached Albright Grove!

The loop is three quarters of a mile long and winds through Eastern hemlocks, tulip poplars, red maples, northern red oaks, birch, hickory and Carolina silverbells. The path has many changes in elevation and beautiful views of giant trees off the trail.

“It is a really good example of old-growth, intact cove hardwood forest,” says Johnson, adding that it “isn’t necessarily a pure stand of ancient trees where everything is old. You’ve got a mix of older and younger.”

About 20 percent of Great Smoky Mountains National Park is old-growth forest, according to Johnson. While other old-growth is on high ridges where logging is difficult, the Albright Grove is a rare, accessible hike for visitors to enjoy.

The largest tree in the national park is a tulip tree, also known as a yellow poplar, with an access path right off the loop trail. With a circumference of 25 feet and 3 inches, it would have stood almost 135 feet tall at one point, but the crown has been damaged, perhaps by lightning.

Large snags, which are standing dead trees, dot the trail and serve as ideal habitats for a variety of species. Outside of old-growth forest, these large snags are rare because most other trees of their width were logged. These empty, larger dead trees make for great breeding areas for birds and for hibernating bears, which prefer them to smaller snags. Some species that benefit from these old giants are woodthrushes, winter wrens, black-throated blue warblers, barn owls and flying squirrels.

Preserving entire areas of old forests like this one is important because these environments foster unmatched water quality and habitats for species diversity, which individual elderly trees cannot do on their own.

Johnson frequently visits the grove, enjoying it in all seasons.

“In the wintertime there’s no leaves and you can just look at that wonderful architecture of bare trees and see the snow on the hemlocks,” Johnson says, “In the spring it’s wonderfully rich with wildflowers.”

On Thanksgiving, I was grateful we could spend time in this forest – and that it will be preserved for years to come.

LENGTH: 6.7 miles round-trip
DIFFICULTY: Moderate
DIRECTIONS: From intersection of Parkway and 321 in Cosby, Tenn., head west on 321 for 2.5 miles. Go left on Baxter Rd. Continue .5 miles until you see a sign for Maddron Bald Trailhead. If using GPS, use “Maddron Bald Trailhead, Cosby, TN” as your destination, rather than “Maddron Bald Trail” or “Albright Grove.” These other locations will take you far off course.
CALL: Main park office at (865) 436-1200
OTHER NOTES: Pets are prohibited. Parking is very limited, but this is a low-traffic destination. Make sure to alot proper time for the hike, at least 5 hours round-trip.