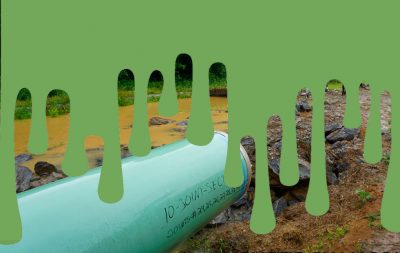 Developers of the Mountain Valley Pipeline (MVP) are claiming they will offset a portion of the carbon emissions from the 303-mile, multi-state project by paying $150 million to … a coal company. A spokesperson for Equitrans Midstream Corp., made the claim earlier this week, explaining that they’ll buy “carbon offsets” from an unspecified coal mine in Southwest Virginia. The mine’s operator will use the money to convert methane gas emitted from the coal mine into carbon dioxide, a less potent greenhouse gas.

Don’t be fooled. Carbon offsetting is a questionable proposition in any form. The basic premise is that by subsidizing efforts to reduce greenhouse gas emissions, or sequester carbon already in the atmosphere, a fossil-fuel project that is in fact carbon-intensive can claim to be carbon-neutral. Reasonable people can disagree as to whether this strategy to address climate change has any merit within a “market-based” framework, but what is not up for debate is that carbon is either emitted, or it is not. Superior strategies to mitigate the effects of climate change would simply fund greenhouse gas abatement and renewable energy projects for their own sake, without simultaneously subsidizing dirty fossil fuels.

Equitrans’ scheme is especially backwards, as the supposed “offsets” are going from one fossil fuel industry to another. Essentially, Equitrans is saving a coal company $150 million dollars to reduce methane emissions from its coal mine. Complicating the arrangement, the project agreement is with a subsidiary of MVP investor, NextEra Energy Resources, which would then be both the seller and the buyer of the carbon offsets. This pay-to-pollute scheme certainly does not show NextEra is “committed to environmental protection and stewardship,” as the company publicly claims.

A bad plan gets worse

Bizarre as this may be, it’s not the first time a dirty energy project has tried to monetize environmental measures elsewhere in the fossil fuel industry in an effort to call itself carbon-neutral. In 2015, controversial Virginia businessman Tom Clarke started a coal company, oddly called Earth Restoration Project, or ERP. He purchased dozens of coal mines in West Virginia, including many mountaintop removal and other types of surface mines which were no longer producing coal, but hadn’t yet been reclaimed according to applicable regulations.

His plan was to assign a carbon offset value to the reclamation of these mines, which he and his company were already legally required to complete, and to bundle these self-assigned offsets with the coal that ERP was actively mining elsewhere. He would then market the coal/reclamation bundle (otherwise known simply as coal) as “compliant fuel.”

Clarke’s plan never really got off the ground, due to the continued decline in the demand for coal, a truly remarkable degree of mismanagement, and an almost impressive streak of noncompliance with environmental regulations.

Last year, after ERP had laid off all its workers, leaving behind numerous pending and ongoing environmental problems, a judge granted the state of West Virginia’s request to place ERP under the control of a third party receiver, tasked with cleaning up Clarke’s messes.

It’s easy to see similarities between ERP and the Mountain Valley Pipeline. For starters, neither entity’s financial or operational projections have quite panned out. MVP is years behind schedule and billions over budget, and ERP is so far underwater it’s found itself a ward of the court. Both have amassed long lists of citations for adverse impacts to land and water. And now, both have attempted to gaslight the public with claims of carbon neutrality.

While Mountain Valley Pipeline’s carbon offset plan laughably props up a coal company, it also wildly misrepresents the pipeline’s actual greenhouse gas footprint. MVP is a climate disaster in the making. Its total emissions estimates are equivalent to that of 23 coal-fired power plants — or 90 million metric tons per year into the atmosphere. (It’s also a water disaster in the present with 350+ violations and counting.)

Importantly, the greenwashing agreement only includes operational emissions of the pipeline, omitting all emissions produced by the drilling, storage and transportation of the gas — which are a lot. And it’s still a plan to pollute — the process described to capture the coal mine’s methane would release significant amounts of carbon dioxide. This does nothing to curtail the pipeline’s leakage of methane gas, a significantly more potent contributor to global warming. The $150 million would be wholly insufficient to actually cover the total methane leakage, from cradle to grave, of the ruinous project.

Additionally, the offset program is limited to just 10 years of operational emissions, ignoring the 50+ years lifetime of the pipeline the developers claim.* The plan misleads the public, incentivizes greenhouse gas emissions and would reward a known polluter.

Under no circumstance does constructing new fossil fuel infrastructure reduce carbon emissions, nor does reducing methane leakage at a coal mine hundreds of miles from MVP’s route erase emissions from the fracked-gas pipeline. This offset announcement is part of the larger misinformation campaign of MVP: Overstate project completion numbers, underestimate negative construction impacts and downplay ongoing legal hurdles. This is no prize-winning plan — it’s a toxic marriage of culpable polluters.

Tom Clarke’s Earth Restoration Project gives us a glimpse into the future, and failure, of pay-to-pollute schemes. Regulators and legislators, including those who have received donations from Mountain Valley Pipeline, and least of all the public should not be fooled. 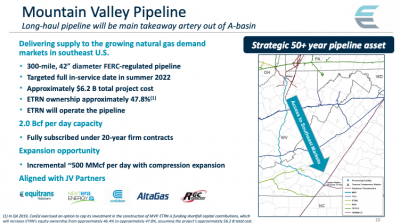 *On August 10, we updated the years of service from 40+ years to 50+ years based on Equitrans presentation to investors in August after this blog was posted. This screenshot is from Slide 10.