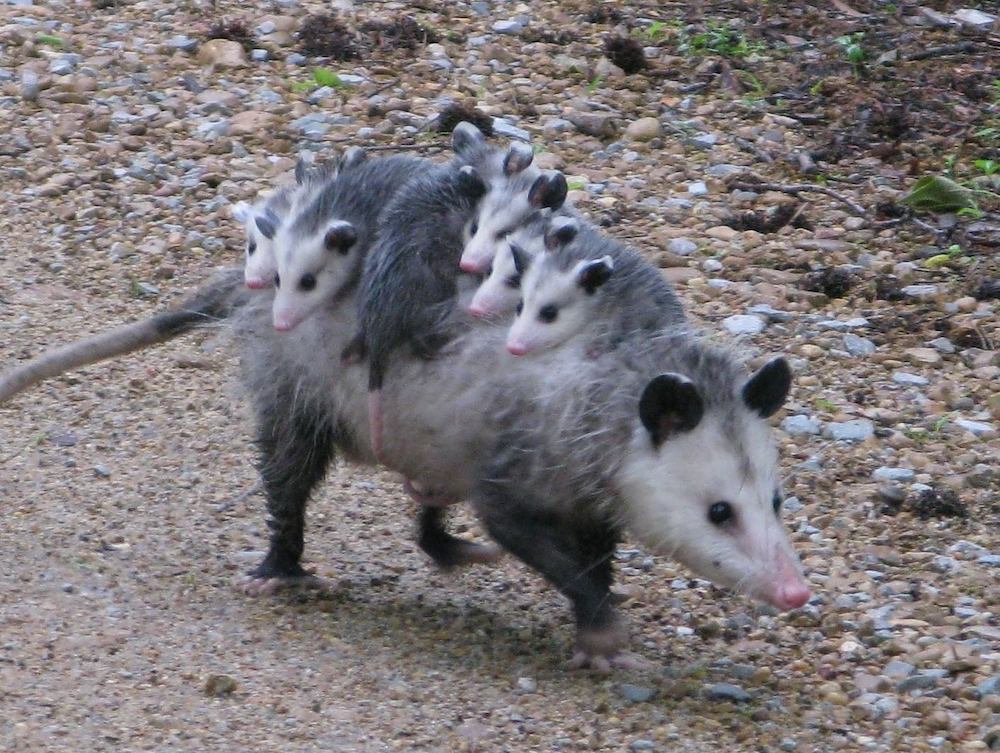 A mother opossum with her young. Photo by Bill Peterson/USFWS

When you think of an opossum, perhaps you picture those little furry creatures that pop up on social media and YouTube. Or maybe you think about tipped-over trash cans and pillaged vegetable gardens. Either way, neither of these perceptions approach the magic of opossums.

Opossums are the only marsupial — animals with pouches, like kangaroos — found in North America. The Virginia opossum, Didelphis virginiana, is the only one that lives in the United States. In the Appalachian region, opossums enjoy a fairly undisrupted life, well-adapted to human neighbors. One of the Virginia opossum’s cousins, the common opossum, Didelphis marsupialis, lives to the south in Mexico and parts of South and Central America.

It’s easy to get stuck wondering what to call the opossums that roam throughout Appalachia. Possums — without the “o” — are technically a separate suborder from North American opossums that is found in Australia. Opossums are a strictly North American phenomenon — but many people do not pronounce the “o,” making the name sound like “‘possum.” So it’s easy to assume that the possums of Australia and the (o)possums of North America are one and the same.

Call them what you like; however, opossum is a loanword from Powhatan, an Algonquian Indigenous language from what is now the Virginia area. Additionally, a number of Indigenous tribes had origin stories of the opossum, which speaks to its range throughout what is now the United States and Canada. For example, a Northern Cherokee Nation story explains why the opossum’s tail is bare.

These animals continue to pervade aspects of modern human life, and can coexist well with human activity. In Knoxville, Tennessee, a local news story covered two opossums that had set up camp in a tree downtown, startling some passersby. However, city officials noted that the species was not an active danger to people in the city, citing its relatively harmless status.

Interaction with humans does come with some risk. Volunteer Coordinator Rebecca Minehardt with the Kentucky Wildlife Center, an animal rescue and rehab organization, sees a lot of opossums injured by cars.

“The population isn’t necessarily at risk,” says Minehardt. “Possums have a lot of babies […] they have 13 nipples in their pouch so they can have that many babies that could potentially survive.”

“People think that opossums are terrible,” says Minehardt, adding that there are many misconceptions about the marsupial. “A lot of people will see a possum out in the day or on the road and they think, ‘Oh no, it’s got rabies.’”

In all likelihood, though, the drooling possum that you have just encountered is not rabid. Unlike many other wild animals that live near humans, opossums very rarely contract rabies. Biologists believe this is due to the species’ low body temperature of 94 to 97 degrees.

Opossums can bluff potentially concerning behavior. In situations where they feel threatened, opossums will hiss and drool to make themselves appear rabid.

While its ability to appear rabid is effective, the opossum’s more notorious behavior is playing dead. This is often affectionately called “playing possum.” When a predator approaches an opossum, it will fall flat on its back, taking on the appearance of death. Although this is commonly thought to be a strategic action on the part of the animal, some experts think that the opossum may be going into a state of involuntary shock. The opossum may be so overcome with fear that it collapses, like a scared person fainting. This behavior, coupled with a bad odor that the possum releases, may have beneficial consequences, though. A roving predator will walk away, assuming that the animal is long-dead and thus undesirable carrion. 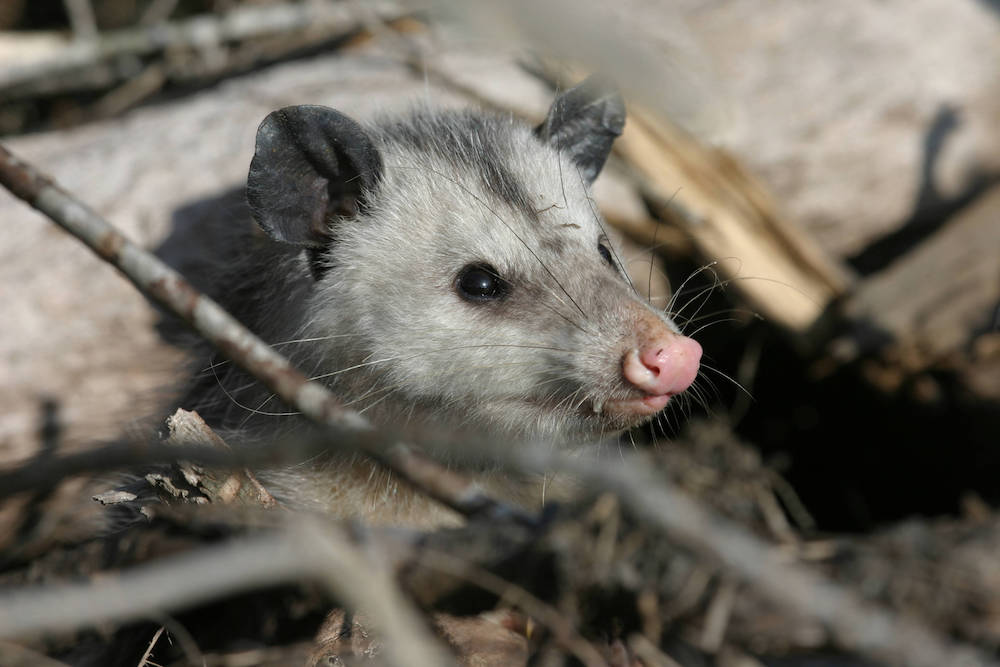 A closeup of an opossum. Photo courtesy of U.S. Fish and Wildlife Service

Opossums are one of nature’s clean-up tools, scavenging for overripe fruit, chasing down cockroaches, and snapping up rats and mice. They have an amazing amount of teeth, nearly 50 by some counts, which allows them to eat a wide range of substances. While opossums are often known for rooting through people’s trash cans, in reality, it is more likely that the opossum you just saw chugging through your yard was scavenging for rodents and other pests — perhaps even devouring ticks. Scientists estimate that a single opossum eats around 5,000 ticks every season, making them an essential tool in the fight against Lyme disease.

Despite their undiscriminating eating habits — or perhaps because of them — opossums have incredible disease resistance, as evidenced in the case of rabies and their inability to contract Lyme disease. You may even see an opossum take on a snake for its next meal. The reason that opossums are happy to eat any variety of snake is that they appear to be immune to venom. Bites from water moccasins, timber rattlesnakes and other species appear to have no effect on the opossum. A 2015 study isolated the peptide in opossum blood that causes resistance against snake venom, and researchers have expressed optimism that this finding could help create more accessible antivenom for people around the world.

Despite their potential to help humans, possums have held a complex spot in pop culture. Opossums were an iconic species in Brasstown, North Carolina. Each New Years’ Eve, an opossum was slowly lowered to the ground in a glass cage. After People for the Ethical Treatment of Animals and other organizations protested this tradition on the grounds of animal rights abuse claims, the city stopped the practice in 2018. Proposed alternatives have included lowering a pot of possum stew, or simply a stuffed animal.

Another town’s celebration of opossums brought up complicated feelings for some people. In 2019, artist Lacy Hale in Harlan, Kentucky, created a mural of an opossum hanging from pokeweed, a plant that depends on the opossum to spread its seeds. The response was mixed, according to West Virginia Public Broadcasting. People expressed concern that the opossum wasn’t a positive representation of their community, citing perceptions of possums as rodent-like, scavenging pests.

Minehardt has a different perspective, though. She sees the opossums as an important part of the natural world around her — and names them as her favorite animal to work with.

“They’re great for the environment,” she says. “I just wish that more people understood the good that they actually do.”

With their appetites for snakes and ticks, and their propensity to clean up stray roadkill and rotting plants, possums may be a creature to keep close by your house. If you remember to seal your trash can tightly, keep your pet food inside, and keep a respectful distance, these creatures could make a welcome addition to any backyard.