Surviving Winter as a Salamander in Appalachia 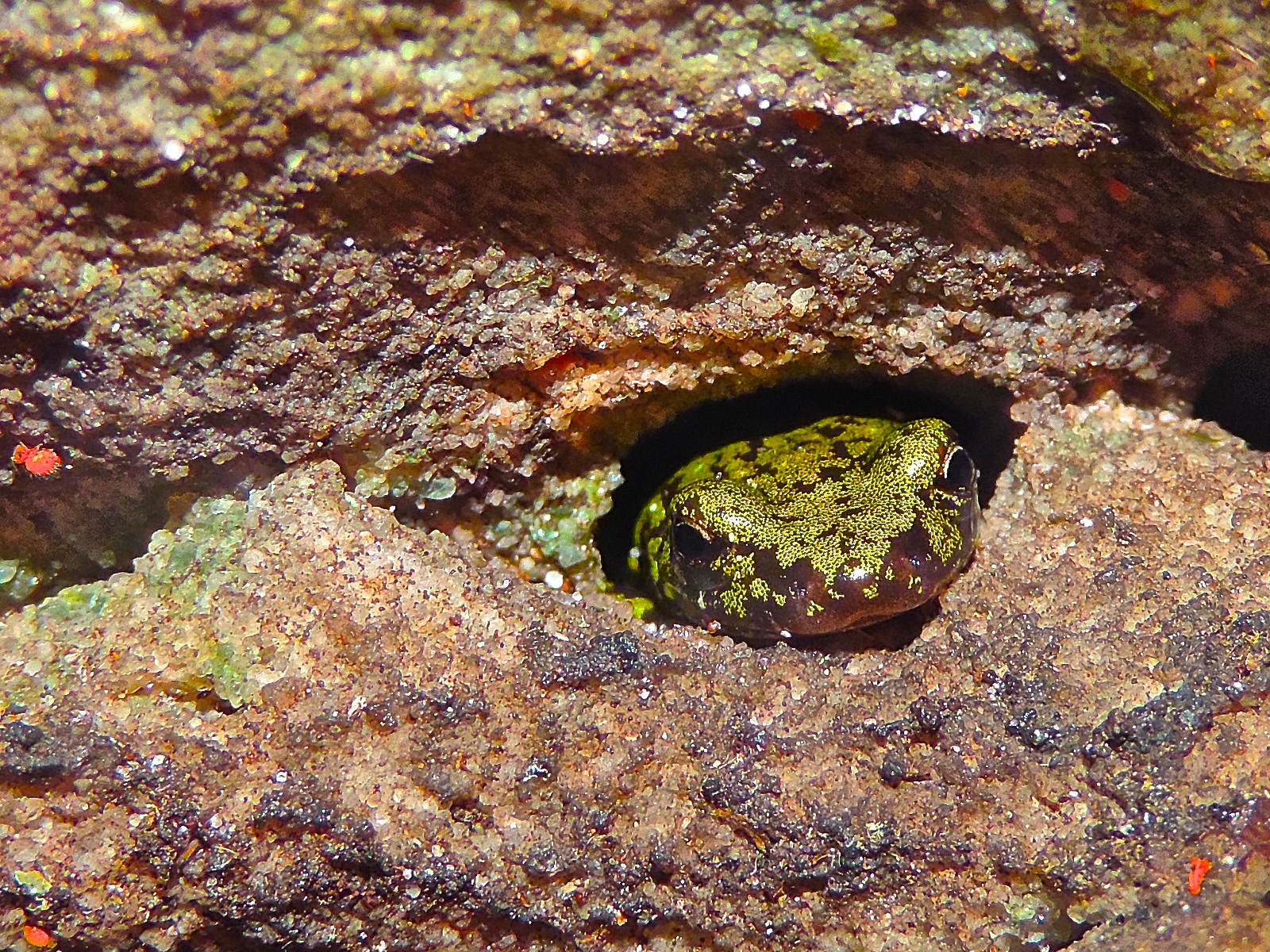 Winter comes with drastic changes. The night steals hours out of the day, cold winds bite down, waters crawl to an icy stop, the woods hollow of the sounds of life, things slow down and dormancy settles over the hills and hollers. We humans survive winter by storing food, chopping wood, and insulating to keep winter out of our homes, but what other strategies are quietly unfolding in the forest?

For one of Appalachia’s most renowned but discreet inhabitants, life itself freezes over with the season.

In a crack in a small rock outcrop, on a particular mountain in Southwest Virginia, a green salamander known to researchers is waiting out the winter. Researchers like Walter Smith, an avid herpetologist and associate professor of biology at UVA Wise have been visiting this individual salamander, let’s call him Greg, at this same rock crevice for 8 years. For over a decade, Greg has retreated from the winter ice deep into the crevices of his rock, settling into a sluggish torpor in parallel with the cold weather, and finally a statuesque stillness to wait out the winter.

Greg is going into brumation, as it is called, which “is a very similar thing to hibernation [for amphibians],” Smith says. “They basically move down to a torpor where they lower their metabolism, and, in a lot of cases, they go somewhere protected, underground down in the leaf litter. It can be a kind of shelter-in place.” 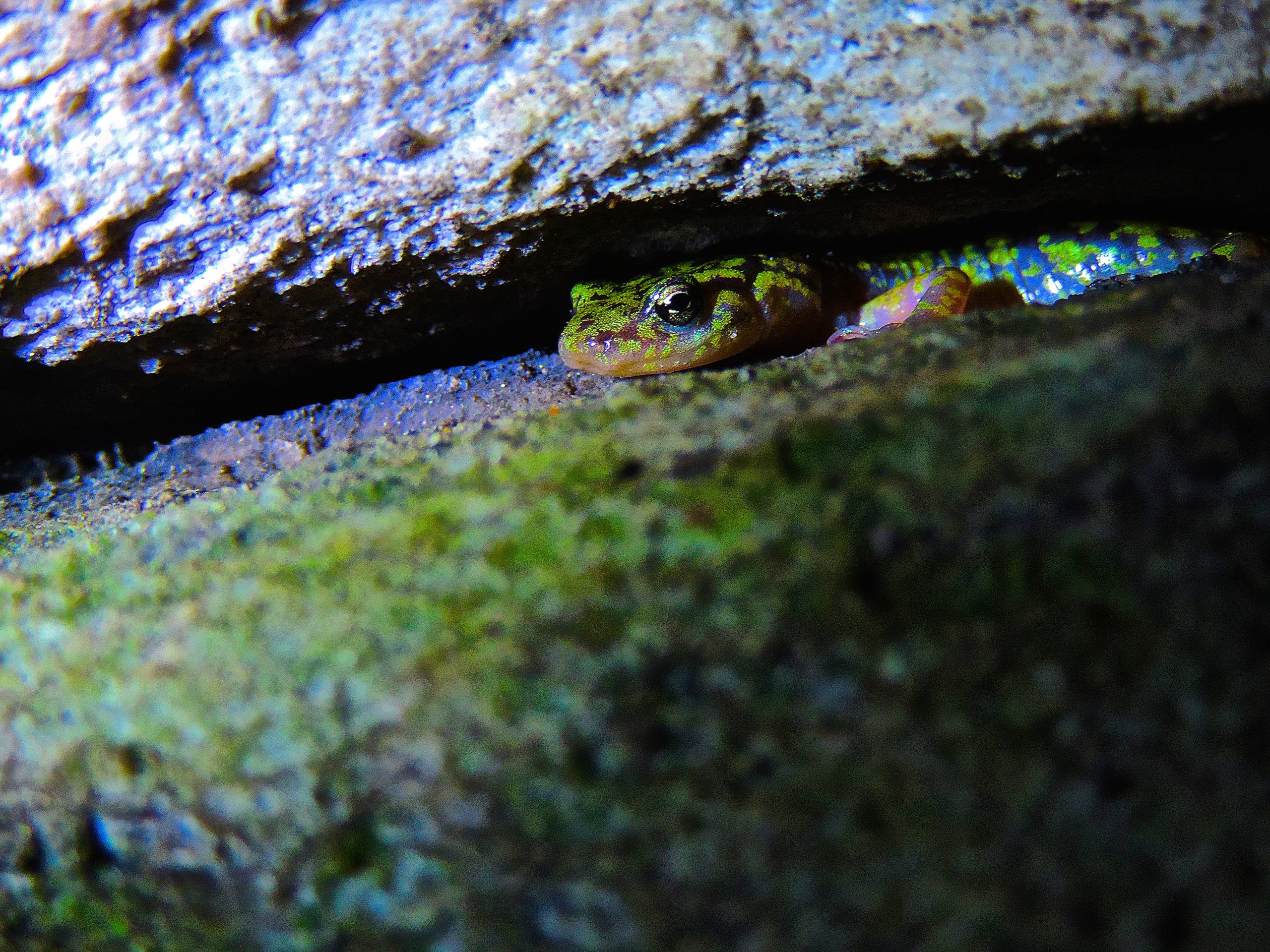 A green salamander overwintering in a rocky crevice. Photo by Dr. Walter Smith.

Salamanders make up a shocking amount of the life in Southern Appalachia. There are a staggering 55 species of salamanders compared to 16 species of frogs, according to data published by the Virginia Journal of Science. Appalachia holds the crown for salamander populations in both number and diversity, and it is a colloquial claim to fame that Appalachia is the salamander capital of the world.

“Certainly, we have more salamanders here than anywhere in the temperate world,” says Smith. “Here, where I am in Southwest Virginia, there are some counties where there could be upwards of 20 to 30 species of salamanders.”

Some of those species exist nowhere else in the world. The Weller’s salamander, for example, sticks to the high-elevation climates of Appalachia, such as the tops of mountains like Grandfather Mountain and Mount Rogers; the green salamander dwells in vertical cliffs in the region where there is a lot of rainfall. And the hellbender, the largest salamander in North America growing more than 2 feet in length, reaches its greatest populations in the larger, oxygen-rich streams of the area. More species are still being discovered.

Besides diversity, their abundance makes salamanders a crucial element of Appalachia.

“There are so many salamanders in our forests, there could be hundreds or thousands of individuals in a single species per acre in some of our forests,” Smith says.

Even though the wriggly, translucent-skinned creatures can be easy to miss, salamanders are considered a keystone species in Southern Appalachia. Their sheer volume makes them a large part of the food web. They eat many invertebrates considered to be pests and are food for many animals, including snakes, shrews and birds, making them a critical agent in the flow of energy and nutrients throughout the ecosystem.

Greg is of a particular species of salamander with a unique winter behavior. As the cold weather approaches, Greg, like all amphibians, will start to drop into torpor.

“But the green salamanders actually change their behavior as we get closer to the winter season,” Smith says.

Greg and his kin will begin to gather on a rock outcrop in what is called a pre-hibernation aggregation.

“And all of a sudden their numbers skyrocket, they all kind of aggregate to get in large numbers, and then once it becomes really cold they’ll disappear because they go back really deep in those rocks,” Smith says.

During Greg’s winter retreat, he, like other amphibians, will seek out a sheltered place. Protected from the temperature fluctuations happening in the air, his metabolism will slow down, and his blood will fill with anti-freeze molecules to keep ice from forming inside his tissue down to 15 degrees Fahrenheit, which is typical of other salamander species. Below 15 degrees, salamanders begin to have tissue damage similar to how humans get frostbite, according to Smith.

In this state, Greg can’t do much more than stare back at potential threats, so he has to rely on his hidden location to protect him from opportunistic predators. Researchers don’t know how long Greg can stay in this cryogenic state, but some arctic species can hold that state for multiple years, waiting for conditions to be favorable again.

But Greg is not hibernating, in the typical sense. His cold-blooded body will be the same temperature as the ambient environment, so if things warm up for a few days, Greg will be up and about. This sensitivity to the environment is one of the reasons that salamanders have been the focus of researchers mapping climate change.

Where salamanders are found, their numbers, and when they are breeding can all be clues as to what is happening in the environment. Since they are so sensitive to changes in temperature and moisture, they are often looked to as an indicator species for factors like water quality, rainfall and ecosystem health.

“Changes in where they live on the map is one way that can happen,” Smith says. “If you track the ongoing range shifts in a species that could be one indicator, because since amphibians are so sensitive to environmental change, they’ll be one of the first animals you would expect to see shift their range.”

He expects that if temperatures rise, some species will shift to higher elevations in search of cooler climates. 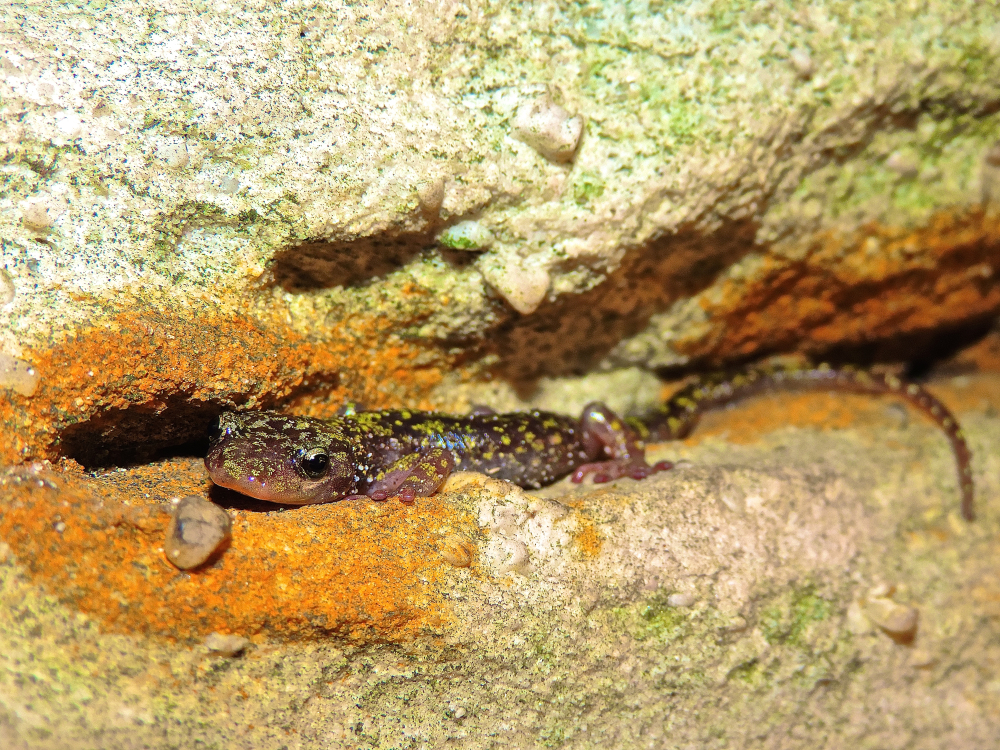 A green salamander in a rocky crevice. Green salamanders like other amphibians, seek out a sheltered place for the winter. Photo by Dr. Walter Smith.

So far, Greg has not had to leave his home. Long-lived for such a fragile-looking creature, a salamander’s lifespan can reach up to two decades. And Greg doesn’t want to travel far.

“Green salamanders, we think, may move on the order of just a few meters throughout their lives,” says Smith. “They may live in the same 30-to-50-foot area of a rock face for their entire lives.”

When warm weather returns to the mountains and pulls us out of our winter seclusion, Greg will start to thaw out, too. Eventually, with the signs of spring, the amphibians will emerge from their dens and turn their attention toward their breeding grounds. Greg will come out to a familiar rock to soak in the sun, another winter done and behind him.

Matt Dhillon is a writer, hiker, hitchhiker, climber, biker, backpacker, maker of strong coffee and teller of stories hopping around the Appalachian region.