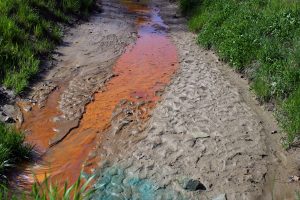 Researchers at Duke University’s Nicholas School of the Environment identified three unique isotopes, or irregularly formed elements, that seem to have a direct correlation with mountaintop removal coal mines. The isotopes identified were sulfate, strontium, and inorganic carbon — all occur naturally but are found in unusually high concentrations adjacent to mountaintop removal sites.

Dr. Avner Vengosh, a professor of geochemistry at Duke and author of the new study, believes that measuring these isotopes can not only help identify the degree of contamination within watersheds, but also determine how much of the contamination is directly affiliated with mountaintop removal.

Water and sediment samples were taken by researchers at 23 separate locations along the Upper Mud River in West Virginia. Over an eight month period, these samples were continuously collected from sites both near and isolated from surface mines.

To understand how these isotopes work as identifiers of water pollution, it helps to know what an isotope actually is. An isotope is simply an irregular form of a basic element. An element’s chemical properties are based on the amount of protons the element has, while the atomic mass of an element depends on the number of neutrons. An isotope, then, is when an element has an abnormal amount of neutrons and therefore differs from the basic element in atomic mass.

The study cites the strontium isotope as being an exceptional indicator of selenium, one of the coal mining pollutants linked to the destruction of aquatic ecosystems. This pollutant is of particular concern since it can be transferred to other wildlife that eat selenium-contaminated aquatic life, including humans. Using isotopic evidence to pinpoint water contamination sources could help communities identify who is responsible for polluting Appalachian streams and rivers.