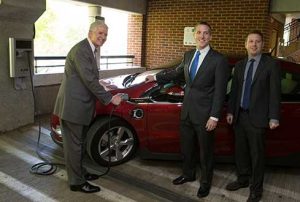 At a parking garage on the University of Virginia campus in Charlottesville, the university’s associate dean of students plugs in a Chevy Volt. Photo by Dan Addison

Throughout many large cities in Appalachia, electric vehicle chargers are increasing in availability near car dealerships, highways and tourist attractions, making it easier for owners to travel in the area.

Charlottesville, Va., is one such city promoting electric vehicles.

Charlottesville’s first experience with electric vehicles started in 2012 when the city received three Nissan LEAF cars through a research and development grant from the U.S. Department of Energy.

Although the LEAF loan is scheduled to end in 2014, Charlottesville decided to expand the electric vehicle trend with the help of one local business owner. Roger Voisinet, a realtor and former environmental planner who owns part of the city’s outdoor downtown mall, is working with city officials to add electric vehicle charging stations to the mall.

The agreement, which has no official timeline yet, would provide charging stations for people to use while they walk, eat or shop in the mall. Voisinet wants to use the solar power he previously installed to help power the stations.

The effects of the additional state taxes, which went into effect July 1, have not been identified yet, but Susan Elliott, the city’s climate protection program coordinator, said it could possibly factor into the buying decision.

“It does make it a more complex decision,” she says. “Especially since EVs are new technology.”

But Elliott says she’s still excited to see the future of electric vehicles in Charlottesville and thinks the charging stations will also be helpful for local businesses.

“I’m definitely interested to see where the conversation goes in the next few years.”