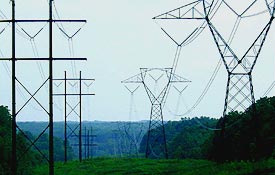 Relying on quick returns, Dominion Virginia Power is unable to act in the long-term interest of consumers.

On June 4, Dominion Virginia Power hosted Appalachian Voices, the Sierra Club, and the Southern Environmental Law Center at the second stakeholder meeting in an ongoing series designed to increase the information shared between the utility and environmental groups.

The meeting was held in downtown Richmond, Va., on the banks of the James River, and adjacent to Belle Isle Park – the urban oasis that offers trails and river recreation for tens of thousands. It was an ironic meeting place for a utility that leaves heaps of toxic coal ash near communities and spews mercury and climate disrupting gases into our air.

We were ushered into a windowless conference room adorned with an expansive painting of power lines and received multiple apologies that we were unable to meet in the sprawling suburbs west of the city. Clearly, we value some things differently, and perhaps that is the purpose of these meetings – not to agree, but to understand.

And maybe I understand them a bit better now.

Dominion appears to believe in the now – not the potential. When the utility asked last year to build natural gas plants, it was because the fuel was cheap. A year later, however, Dominion is asking for a fuel factor rate increase based on its poor foresight of rising natural gas prices, a shift that it presents as being a complete surprise.

Dominion also tends to make linear projections of energy demand despite the fact that appliances and dwellings are continually using less energy. According to Dominion, there has been a 32 percent reduction in energy intensity, but that is a statistic that it prefers to use in reflection rather than in planning. For decades, Dominion has projected increases in demand, which are divorced from reality but very lucrative for the company.

Their billion-dollar “investment” in one of several proposed natural gas plants will have a guaranteed rate of return of more than 10 percent.

When regular people invest – outside of a regulated monopoly – there is the element of risk, so caution will sometimes outweigh ambition. Dominion does not face that impediment, but still complains that a rate of return of more than 10 percent is not enough.

The utility touts that it did not increase base rates this year – and it got significant press coverage for the apparent sacrifice. However, the company and its investors are doing quite well after a 18 percent rate increase in 2008 (more than $16 per month and the largest increase since the 1970s) and another hike in 2011 that raised rates by more than $8 per month for every residential customer.

Either Dominion is suffering from a serious case of attention deficit disorder (which is better than asthma, considering Dominion’s headquarters in the U.S. asthma capital) or perhaps it is knowingly using data to paint a picture that only it could appreciate – a little like a mural of power lines.