A Week of Education and Action 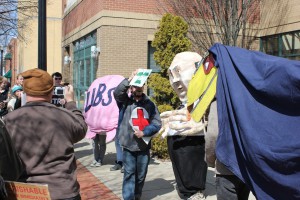 Last week, more than a hundred college students from around the country spent their spring break in Appalachia, Va., to learn about mountaintop removal coal mining, involve themselves in nonviolent actions, and volunteer for social projects that benefit a community that all too many choose to ignore.

By the time I arrived on Friday, the students had already learned about mountaintop removal coal mining. They had toured several mine sites in Wise County, learned how to test water for contaminants, and studied the ecosystems of Appalachia’s incredibly diverse forests.

They had worked on a full day of trail maintenance on Pine Mountain and volunteered much needed manpower to a mobile health services group that provides essential care to impoverished residents forgotten by the coal industry.

Earlier in the week, the students learned about banks that invest in mountaintop removal and how to use nonviolent action to effect change. By Friday, they were ready to make a statement. After a hot breakfast, we loaded up a caravan of cars and set out for a peaceful protest on the sidewalks outside of UBS Bank in Kingsport, Tenn.

Once there, I had my first glimpse of handcrafted props for the planned skit as they were pulled out of pickups and station wagons. The group marched around the block drawing cheers and honks of support from passing motorists. The students then sat on the sidewalk singing songs and chants, as well-dressed bankers peered out from the windows above and sent secretaries to lock doors despite a significant presence from the local police force.

For their part, the officers were incredibly polite and a few even asked me for more information about mountaintop removal. I walked the officers through the narrative of the skit as we watched a giant “fat cat” banker slip dinner plate sized coins into a 4-foot wide piggy bank while a dragon inspired dragline chewed through our mountain resources.

On the drive home to Wise, I took a few people up to a mountaintop removal site that I visited last October. Since then, the last ridgeline of trees had disappeared and many more level plateaus of dirt and rock replaced topography that once channeled and filtered water for the town below.

I knew what was coming, but it is always difficult to see. My passengers were incredulous – “How do they get away with this? What can we do to stop this? Did you say that 30 percent of the county is mined like this?”

I spoke about the process, the legal issues, and our efforts to bring it to an end – anything to stay clinical – kind of like a doctor describing a rapidly growing cancer that he’s fighting with some success, but amid heartbreaking losses.

We had a quiet ride back down the switchbacks as they pondered the lost mountain and I pondered my upcoming presentation on the Coalfields Expressway.

The next morning, I described the use of mountaintop removal in highway construction and showed the students the planned route for the expressway along with pictures of beautiful mountain highways like the Blue Ridge Parkway and I-70 through Glenwood Canyon, CO. I presented this project as the death throes of a dying industry that has moved from underground mines to auger mines to mountaintop removal and now “coal-synergy” projects. It is a shameful indication of an industry in decline, desperate for profits whatever the expense.

The students at Mountain Justice Spring Break are on board to make it stop and they are eager to join in the collective call of our grassroots supporters.