Renewing the Push for Renewable Energy in Virginia 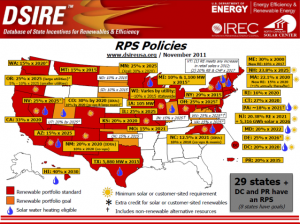 Each year, as Virginia’s General Assembly convenes, lawmakers are confronted with hundreds of proposals running the gamut from education to energy. Many involve complicated issues, and many are distorted by corporate interests and political posturing.

This year the legislature is grappling with a key renewable energy law, known as the Renewable Portfolio Standard (RPS), which it passed in 2007. An RPS sets a certain percentage of a utility’s power that comes from renewable sources; the intent is to spur modern technologies such as wind turbines or solar panels.

Twenty-nine states and the District of Columbia have a mandatory RPS with strict standards. In those states, thousands of megawatts of wind and solar energy is powering homes and businesses, and the renewable energy industry is producing thousands of new jobs every year.

In Virginia, the RPS is voluntary – and has not led to the construction of a single wind turbine or solar panel in the commonwealth. The RPS law provides significant financial rewards – paid for by ratepayers – as a way to encourage utilities to use renewables. It also has a very loose definition of what constitutes renewable energy, making it easier for utilities to meet the goal, and get their reward. Which they’ve done handily. Dominion Virginia Power has received $77 million in RPS bonuses, and Appalachian Power Company has received $15 million. They relied almost entirely on existing hydro-power dams, most built before WWII, and credits purchased from renewable facilities in other states, to meet the goal.

Again, not a single new renewable project has been put on the ground in Virginia. Appalachian Voices and our partners in the Wise Energy for Virginia Coalition took note of these problems and have argued that without renewable energy in Virginia, the financial rewards are undeserved. Late last year, Attorney General Ken Cuccinelli came to the same conclusion, but we differ on where to go from here.

The disagreement is reflected in two bills pending in this year’s General Assembly. The Attorney General, in collaboration with the two major electric utilities in the state, has put forth a bill (HB2261, SB1339)that gets rid of the financial incentive. That’s all well and good, but by leaving the RPS as voluntary and without fixing the definition of renewable, there is even less chance Virginians will see the many benefits of true renewable energy – jobs, cleaner air, less mountaintop removal coal mining and other devastating forms of fossil-fuel extraction, and progress in addressing climate disruption.

Appalachian Voices supports a plan (HB1946, SB1269) that requires, among other things, that certain amounts of wind and solar energy be constructed in Virginia. Ultimately, we would like to see a mandatory RPS standard and major shifts to green energy.

Stay tuned – we’ll be updating this blog frequently over the next several weeks for the status of this critical fight in Virginia’s General Assembly.

(If you are a Virginia resident – please contact your senator and delegate and tell them you want a strong plan for moving renewable energy projects forward in Virginia! )