The “Art” of Influence: A Story of Strategy in the Post-Citizens United Political Terrain

On March 15, when a campaign called N.C. Real Solutions launched, it came with a 30 second television spot aimed at North Carolina Governor Bev Perdue. The ad claimed that the new state legislature’s budget, which Perdue vetoed out of concern for its effect on education before being overridden, actually added funding for 2,000 more teachers.

Progressives took to the blogs, where they lashed out claiming the ad and the campaign distort the facts. Gov. Perdue, a first-term Democrat, publicly asked for the ad to be taken off the air, calling it “misleading.” When the state’s second-largest newspaper, The News & Observer, fact-checked the ad, they found it to be half-true. What N.C. Real Solutions failed to mention is that North Carolina lost 915 teachers in 2011.

Created by a partnership between the Raleigh, N.C.-based John William Pope Civitas Institute and the North Carolina chapter of the national group Americans for Prosperity, N.C. Real Solutions represents the latest strategic move by a network of think tanks, nonprofits and foundations advocating for low taxes and limited government. What binds them is that they are all either funded, founded or otherwise supported by one man, James Arthur “Art” Pope. The multimillionaire CEO and board chairman of Variety Wholesalers Inc., Pope has been dubbed the “Knight of the Right” by The News & Observer for his support of conservative principles and candidates.

It’s no secret that the influence of money has altered the political playing field. Running for political office is more expensive than ever and in many races, no matter how small, establishing a war chest is practically a prerequisite. Two years after Citizens United vs. Federal Election Commission, the 2010 U.S. Supreme Court decision that equated money with speech, Pope and his peers are more than just wealthy individuals resolute in their ideals. They’ve emerged as trailblazers of the post-Citizens United political terrain. 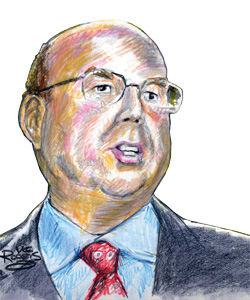 Raleigh, N.C., businessman Art Pope emerged as a key political figure during the 2010 midterm elections. Ever since, he has been a lightning rod in the debate of money's role in politics and the consequences of the Supreme Court's Citizens United ruling. Illustration by V.C. Rogers, originally appeared in the Independent Weekly on March 9, 2011. (vcrogers.com)

Off to the Races

With the Supreme Court’s landmark ruling in Citizens United, the floodgates regulating campaign finance were opened. Two months later in the less dramatic Speechnow. org v. FEC, the Federal Court of Appeals for the D.C. Circuit ruled that the Federal Elections Campaign Act — the same law amended by Citizens United — could not restrict individuals’ freedom of speech by limiting the amount that an individual can contribute and thus the amount an organization may spend.

In the lead-up to the 2010 midterm election, Pope and groups he supports poured $2.2 million selectively into small races across North Carolina, using methods made possible by changes to the state’s constitution to reflect the Citizens United ruling. Much of those dollars ended up as attack ads and incendiary mailers. In one, Margaret Dickson, who ran for reelection in the State Senate, is portrayed as prostituting herself. Another, accused Chris Heagarty, a lawyer running in Wake County, of voting to “raise taxes over a billion dollars,” even though he had not yet served in the legislature. Of the 22 races that Pope and these groups contributed to, they won 18. For the first time in more than a century, Republicans gained control of both chambers of the state General Assembly.

“Who gets elected and who makes decisions affects all of us,” says Bob Hall, the executive director of Democracy North Carolina, a group focused on money’s influence in politics. “Too often the money in campaigns is a determining factor in who gets to win and who gets to even run.”

Since Citizens United, a new breed of political action committee, known as the super PAC, has set the standard for political fundraising. So far during this year’s presidential primary, $159 million has been raised by super PACs on both sides, most of that coming from a small number of wealthy individuals — a troubling precedent to Hall, who says, even after policymakers are elected, they’re constantly looking over their shoulder and wondering where the next buck will come from.

Looking back on the numbers from 2010 is even more revealing. Altogether, the midterm election cost nearly $4 billion, passing the previous midterm election record, set in 2006, by more than a billion dollars. About $500 million was spent by outside groups to influence the election.

Without spending limits, super PACs are waging a political war where no one is safe. When President Obama recently gave the green light to PACs supporting his reelection, House Minority Leader Nancy Pelosi expressed her relief. Not accepting PAC donations, according to Pelosi, would be to “unilaterally disarm and leave the field to the Koch brothers to decide who would be president of the United States and who would control the Congress.”

Officially known as “independent-expenditure only committees,” super PACs are technically prohibited from coordinating with campaigns, and instead focus their efforts on electioneering communication for and against candidates. The tsunami of television ads unleashed by super PACs this year alone is expected to reach $3 billion, making the $2.2 million linked to Pope in 2010 seem like spare change, and his strategy all the more deft.

Although Pope has been politically active in North Carolina for decades — he served four terms in the state House of Representatives and ran for lieutenant governor in 1992 — many were exposed to the 55-year-old’s influence for the first time by an October 2011 investigative feature in The New Yorker. In “State for Sale,” writer Jane Mayer navigates the web of Pope’s influence and the donations during the 2010 election cycle that led back to the mogul — 75 percent of all contributions to far-right candidates. In an NPR interview, Mayer said that “[Pope] sees this whole operation as beneficial to voters.

“It gives them more choices and it helps them understand the records of the officeholders,” she says. “He has many rationales for why more money is just better.”

Engaged in their own battles, North Carolina media organizations on the left and right have used Pope as either the exemplar of everything wrong with the state of campaign finance or a fighter for first amendment rights.

In the Independent Weekly, the executive director of the Institute for Southern Studies, Chris Kromm, described how the Pope strategy — much like that of his friends and political allies, the billionaire Koch brothers — is not to just see his side win, but to “shift public opinion and the entire political debate toward a pro-business, anti-government agenda.” He accomplishes this, Kromm says, by sustaining the network of groups that make up the backbone of North Carolina’s conservative movement, including the Civitas Institute, the John Locke Foundation and Americans for Prosperity.

The John Locke Foundation, a far-right conservative think-tank, and Americans for Prosperity N.C., founded by Pope, advocate for the repeal of modest legislation promoting clean energy and promote school privatization among other positions that Kromm says “are really outside where the public stands on the issues.”

Pope hasn’t backed away from his critics and publicly maintains that he supports first amendment rights to freedom of speech, for individuals and corporations, and seeks only to educate voters on the issues. Responding to Mayer’s story in The National Review, Pope called The New Yorker story “bilge” and an attempt at character assassination, and asked, “What makes me different from George Soros or George Clooney?” He pointed out — as he has on numerous occasions — that, unknown to most who demonize his role in the 2010 election, Democrats in North Carolina actually outspent Republicans by more than $3 million. 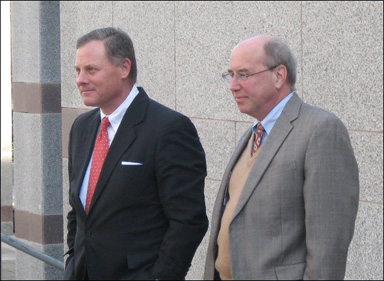 N.C. Senator Richard Burr (left) and Art Pope attend an Americans for Prosperity anti-union rally in Raleigh, N.C. Pope funded the North Carolina chapter and is one of four national directors of the political advocacy group that was instrumental in the 2010 election on the state and national level.

Even as the shared policy goals of North Carolina’s conservative network and its donating power were raising eyebrows, a project of the Republican State Legislature Committee, the Redistricting Majority Project, or REDMAP, had much larger aspirations.

Shortly after Barack Obama won the presidency by running on the theme of “change,” conservative strategists decided it was time to rethink their own approach. REDMAP was created to take control of state legislatures in time to steer the redistricting process that occurs each decade. Deemed a massive success, not only did Republicans win big in North Carolina, they gained
majorities in 21 state Houses and Senates. The GOP gained 680 seats overall in state legislative races, breaking the Democrats’ record of 628 during the post-Watergate 1974 election and making 2010 one of the party’s most successful elections in history.

When asked if the Democrats would have an answer to REDMAP in 2012, Mayer said she is “sure the Democrats are watching and trying to learn.”

On Nov. 1, 2011, redrawn maps created primarily by the new majority in the North Carolina state legislature, that likely would not have been possible without Pope’s backing, were approved by the U.S. Department of Justice. Lawsuits from the NAACP and the N.C. League of Women voters were filed almost simultaneously, accusing conservatives of gerrymandering for a decade of partisan advantage. In the fallout, several state Democrats — including Gov. Perdue — and Republicans have bowed out of the upcoming primaries.

When money equals speech, people as wealthy as Art Pope, the Koch brothers and even George Clooney have loud voices. To remedy this, groups like Democracy North Carolina propose voter-owned, publicly-funded elections and grassroots voter education. On the other side, the John Locke Foundation and Americans for Prosperity advocate for protecting “free and political speech rights by deregulating campaign finance.”

As opposition to Citizens United grows, there is a push for campaign reform. The DISCLOSE act, introduced in April 2010, would prohibit foreign corporations from influencing elections and given the public access to information regarding corporate donors and their campaign expenditures. More recently, Vermont Senator Bernie Sanders introduced a bill to overturn Citizens United, which he called “one of the worst decisions ever handed down by the Supreme Court.”

As the nation catches its breath after the 2010 elections, another wave is reaching its crest. And even if Pope’s purchasing power changes in the future, he’ll remain the “Knight of the Right,” having contributed to a political conquest that changed the way races are run — and won.