The Scoop on Coal Ash at Asheville Plant in North Carolina

Big Thanks to Hartwell Carson, French Broad Riverkeeper for his help with this post. 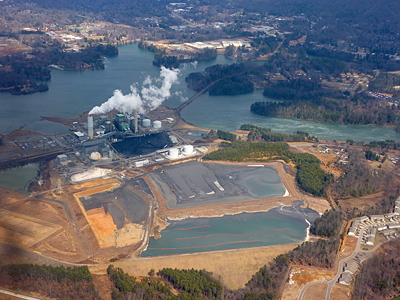 Coal contains heavy metals by its very nature. Heavy metals are toxic and oftentimes, a little dab will do ya. For example, just one teaspoon’s worth of mercury can contaminate a 20 acre lake to the extent that the fish become contaminated enough that they can become unsafe to eat.

When coal is burned for electricity, heavy metals are concentrated in the resultant coal ash (known more technically as “coal combustion waste”). Heavy metals of concern include but are not limited to arsenic, lead, mercury, manganese, and selenium. Each of these heavy metals can have differing negative effects on the body.

Cleaner Air, But The Dirty Has to Go Somewhere

Ironically, coal ash became a big problem when the laws like the federal Clean Air Act and in North Carolina, the Clean Smokestacks Act called for air emissions reductions from coal-fired plants.

Into the Ash Heap of History

Oftentimes, coal ash is stored on-site at the coal plant in big pits held back by an earthen dam. It is either stored dry or more commonly mixed with water. Air pollution can still be an issue with dry storage since coal ash is very fine– think black talcum powder. Groundwater contamination is the main concern behind wet storage.

Groundwater pollution might be minimized if ponds were lined. However, most impoundments in North Carolina are uncovered and unlined.

Coal ash can be “recycled” for “beneficial use” into products like drywall, where it is “encapsulated” and in theory the ash is locked away from causing contamination. Other forms of “recycling” include as fill material, which can be more problematic, especially if there is no liner to stop coal ash from mixing with groundwater. Many states have no provisions requiring this.

With a height of about 9 stories, there is a lot of coal ash in which to dig through in the two ponds at Progress Energy’s Asheville coal plant. The older of the two dams, built in 1964, was the only coal ash impoundment in the country to receive a “poor” rating (PDF), requiring remedial work to ensure stability.

Nearly 1,800 residents live within a one‐mile radius of the impoundments. The Google Earth map above illustrates the proximity of the impoundments to one neighborhood in particular (Julian Trails) and also to Interstate 26. The U.S. Environmental Protection Agency (EPA) has classified the ponds as “high-hazard” meaning that loss of human life would probably occur should a dam failure occur.

The Coal Ash, My Friend, is Blowing in the Wind

The community of Lake Julian Trails did experience an episode with dried-out coal ash coating cars and houses. The coal ash pile was getting too high and it was becoming difficult to keep it wet.

The state contracted with a lab to analyze the dust after the incident and found that the material contained dangerous elements including arsenic, chromium and radioactive strontium.

Progress Energy planted trees between the neighborhood and the impoundments to help stop coal ash from falling on the neighborhood. They have also started to move some of the dried ash to the Regional Airport for fill.

While this has helped mitigate the dust issue, anecdotal evidence suggest that coal ash continues to blow into the neighborhood. Residents have also complained about the persistent traffic and road damage from the constant parade of trucks moving the coal ash out.

If you have seen the movie, Erin Brockovich, you might remember it was hexavalent chromium, a known carcinogen, that was polluting the town’s water supply.

Using existing EPA data on coal ash, a study by EarthJustice and Sierra Club reported levels of hexavalent chromium at the Asheville Plant at 83 parts per billion, 66% above North Carolina’s groundwater standard.

Arsenic is also known to be carcinogenic, and exposure to this toxic substance can include stomach irritation, liver damage, and skin discoloration. High exposure levels can be deadly to humans.

In February of 2009, UNCA’s Environmental Quality Institute conducted some preliminary sampling in an unnamed tributary downstream from the plant and discovered a sediment sample that contained an alarming arsenic level of 258 parts per million.

An excerpt from the Mountain Xpress article about the findings,

That’s more than 15 times arsenic’s “probable effect level” — the point at which a toxic element frequently has negative effects on organisms — as opposed to its “threshold effect level,” at which organisms might experience negative effects but rarely do, he explains. The naturally occurring arsenic level in U.S. soils, notes Patch, averages about 5 ppm.

And The Hits Just Keep on Comin’!

Hundreds of exceedances of state groundwater standards found by Progress Energy’s own voluntary groundwater monitoring led the North Carolina Department of Environment and Natural Resources to require additional monitoring wells and sampling for the Asheville plant, as well as others, at the compliance boundary. In theory, finding exceedances at a compliance boundary should trigger the state to require Progress Energy to take action to remedy the situation.

The Division of Aquifer Protection is awaiting a set of 4 samples to determine the extent of the problem; three samplings have shown consistent and very high exceedances for iron and manganese (some up to 100 times permitted groundwater levels).

If you look at the monitoring results (PDF), you will see that monitoring well CB-3, located just a couple hundred feet from the Julian Trails neighborhood, show exceedances of iron (up to 300 times), manganese (up to 3 times) and thallium (up to 2 times). Monitoring well CD-8 has exceeded a number of limits including boron, chloride, chromium, iron, manganese, selenium.

In the meantime, the Environmental Protection Agency is considering rules that would provide minimum federal standards for all coal ash disposal and storage.

Unfortunately, we are witnessing a large scale attacks by some powerful members of Congress to protect the coal industry have ever having to clean up their mess on coal ash, as well as other forms of pollution.

Senate Bill 1751 would stop the EPA from ever being able to issue protective standards to guard against coal ash contamination of our air and water. The House has already passed a similar bill (H.R. 2273).

24 people from the neighboring communities of the Asheville plant recently signed on to a letter asking Senators Key Hagan and Richard Burr, asking them to “Don’t Forget About Us” and protect them from coal ash water pollution. A total of 1200 people who live near coal ash ponds have signed onto this letters to their Senators.

Join them- please send a message to your Senators today and ask them to stand up for your right to clean water today!

And finally, here is a timeline of the events and reports described above: