Something good happened in Cleveland, Ohio this past Friday. In a city that has symbolized urban pollution since the 60’s and has taken some blows in the current economic recession, Bobby Kennedy came to town to celebrate.

He was here at a press conference on the banks of the Cuyahoga River to help launch journalism website EcoWatch as the national voice of the grassroots environmental movement. At the place where the rivers once burned from oil and debris, Bobby Kennedy, the founder of Waterkeeper Alliance, told us how individual private citizens banded together to form a movement that eventually resulted in the Clean Water Act and 28 more environmental legislative victories, even under a Republican president with bi-partisan support.

In his speech at the press conference, he told us how ordinary people – a mixture of plumbers, veterans, carpenters, and others – used a once-obscure law to collect bounties for nailing polluters on the Hudson River, now one of the cleanest waterways in the country. He told us that we could do the same in our towns and cities and mountains, that we could enforce the law. 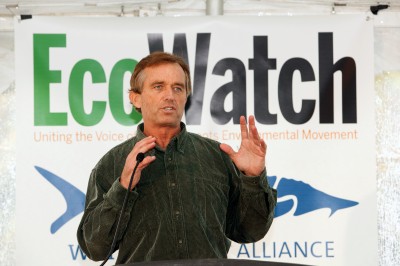 Robert F. Kennedy, Jr. announces the launch of the EcoWatch and Waterkeeper Alliance news service website—www.ecowatch.org—at a press event in Cleveland, Ohio. The website works to unite the voice of the grassroots environmental movement and mobilize millions of Americans to engage in democracy to protect human health and the environment. Photo by Marianne Mangan

And that reminded me of what the Waterkeepers in Kentucky and all through the southern Appalachians are doing now with the support of Appalachian Voices and other partners: seeking to enforce the law. Bobby Kennedy was eloquent, passionate and committed, and we are fortunate to have him come speak at the annual Appalachian Voices meeting planned for Charlottesville, Virginia in May. You don’t want to miss one of the best voices in the country for fighting the corporate pillaging of our mountains and our communities.

But his speech is not what I will remember most about the day. You see, I arrived, and like the old geezer I am, I knew that the speeches would last long and I better find the facilities beforehand. As I exited the relief station, Bobby stood there with only two other people, so I stopped to talk. He shook my hand with his left hand, and I commented that I knew he had just had rotator cuff surgery on his right arm, and I told him of my experience with the same ailment. I told him some of us were working in the faith community for environmental justice, and we welcomed his support. He said he would do almost anything for Appalachian Voices because we do such a good job standing up for what is right, and that he was happy the Pope has even started talking about economic injustice and corporate greed. I thought my few minutes were up, but he wanted to talk more about rotator cuffs and recovery, so we stood there like two aging jocks discussing our wounds. 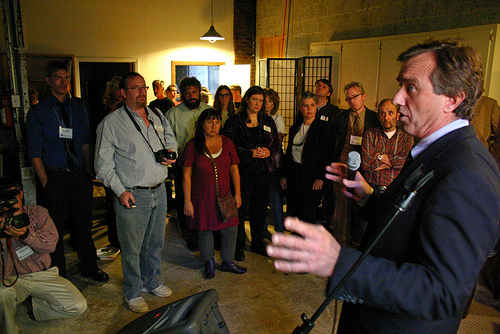 Bobby Kennedy speaks at an Appalachian Voices open house in 2008.

Maybe the Occupy Wall Street folks should include guys like Bobby Kennedy, Jr. in their ranks. For the change we need is not just about shifting money around from the haves to the have nots, it’s about justice and creating sustainable communities for all people, even those not yet born. So I really like Bobby, and I don’t want you to miss hearing him. He’s one of us.

Jim Deming, Minister for Environmental Justice
Justice and Witness Ministries, United Church of Christ
Honored member of the Board of Directors of Appalachian Voices

Check out a video from EcoWatch’s press event here.

On Thursday, November 3, 2011 at 7 pm Wake Forest University’s Center for Energy, Environment and Sustainability, in partnership with the Yadkin Riverkeeper, will welcome Robert F. Kennedy, Jr. for a lecture titled Green Gold Rush: A Vision for Energy Independence, Jobs, and National Wealth. This event is free and open to the public and will be held in Wait Chapel. Visit the Center’s web page for more information.