There should be zero “significant” hazard coal ash ponds in the United States. The catastrophic collapse of TVA’s Kingston coal ash pond should be a one-time event. Congress should be fighting to protect citizens from another spill. 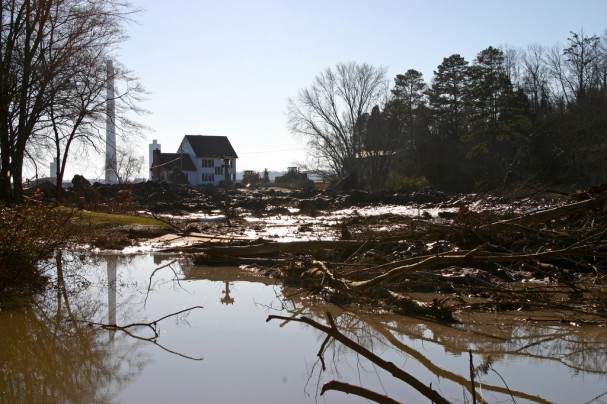 In other words, there is no reason to believe that the spill in Kingston, Tennessee in 2008, which released a billion gallons of toxic coal sludge over 300 acres of land, was a one-time event. There are no federal regulations for coal ash ponds, just a patchwork of weak and often unenforced state regulations.

The EPA is trying to do something about this, but people like Rep. David McKinley (R-WV) have fought to stop them. He sponsored a bill that would prohibit EPA from creating federally enforceable guidelines for safer coal ash storage. The bill passed the House and is on the way to the Senate, where Appalachian Voices is working with allies to defeat it.

The pro-coal bill is being pushed by big utilities and coal companies, touting a false jobs argument while protecting their profits at the expense of the public. In truth, they like coal ash ponds because they are cheap ways to dispose of ash and do not create jobs they have to pay for.

Though I suppose that’s not always the case: the Kingston spill has cost $1 Billion, and, over two years later, still employs 450 people six days a week to clean it up. So for those of you at home keeping count, that’s 550 workers in Tennessee shoveling coal out of the ground, and 450 workers scooping toxic coal sludge off the ground.