Today, the House Committee on Oversight and Government Reform is working hard to protect your right to dirty water. Or maybe it’s the right of coal companies to blow up mountains anywhere, anytime, and poison your water without paying the consequences. Whatever they want to call it, the fallacy of “regulation kills jobs in Appalachia” is once again being touted on Capitol Hill by the coal industry, and some in Congress are echoing them in the recent staff report Broken Government: How the Administrative State has Broken President Obama’s Promise of Regulatory Reform.

While the same idea that the EPA acting to protect public health from the effects of mountaintop removal coal mining is bad for business is relayed throughout the report, this number is new to me:

Now, let’s accept for a moment that “permitorium” is a word (though it is most certainly not). The Environmental Protection Agency, as a governmental agency, is required to obey and uphold the law. If a proposed mountaintop removal coal mine does not meet the requirements of the Clean Water Act, the EPA cannot simply give it the green light on a permit. If your business plan is to dump toxic waste into headwater streams that feed into people’s drinking water, why should they allow you to mine?

Before getting caught up in the false dichotomy of “jobs vs. the environment,” it should be noted that the report’s numbers are bogus, strip mining does not support job growth, and stopping mountaintop removal coal mines is actually good for the economies of Appalachian communities.

First of all, let’s be clear: the principle reason mining companies use the mountaintop removal method to mine coal is to eliminate the need for jobs. Underground mining requires more miners. In order to increase profit margins by eliminating costs (read: employees), they use machines and explosives to replace people. Since adopting the practice of mountaintop removal, coal production has increased, and mining jobs have plummeted. Good for mining executives, bad for miners.

This graph demonstrates the decades long trend in West Virginia, where coal mining jobs are now about a quarter of what they once were despite the increase in coal mined. 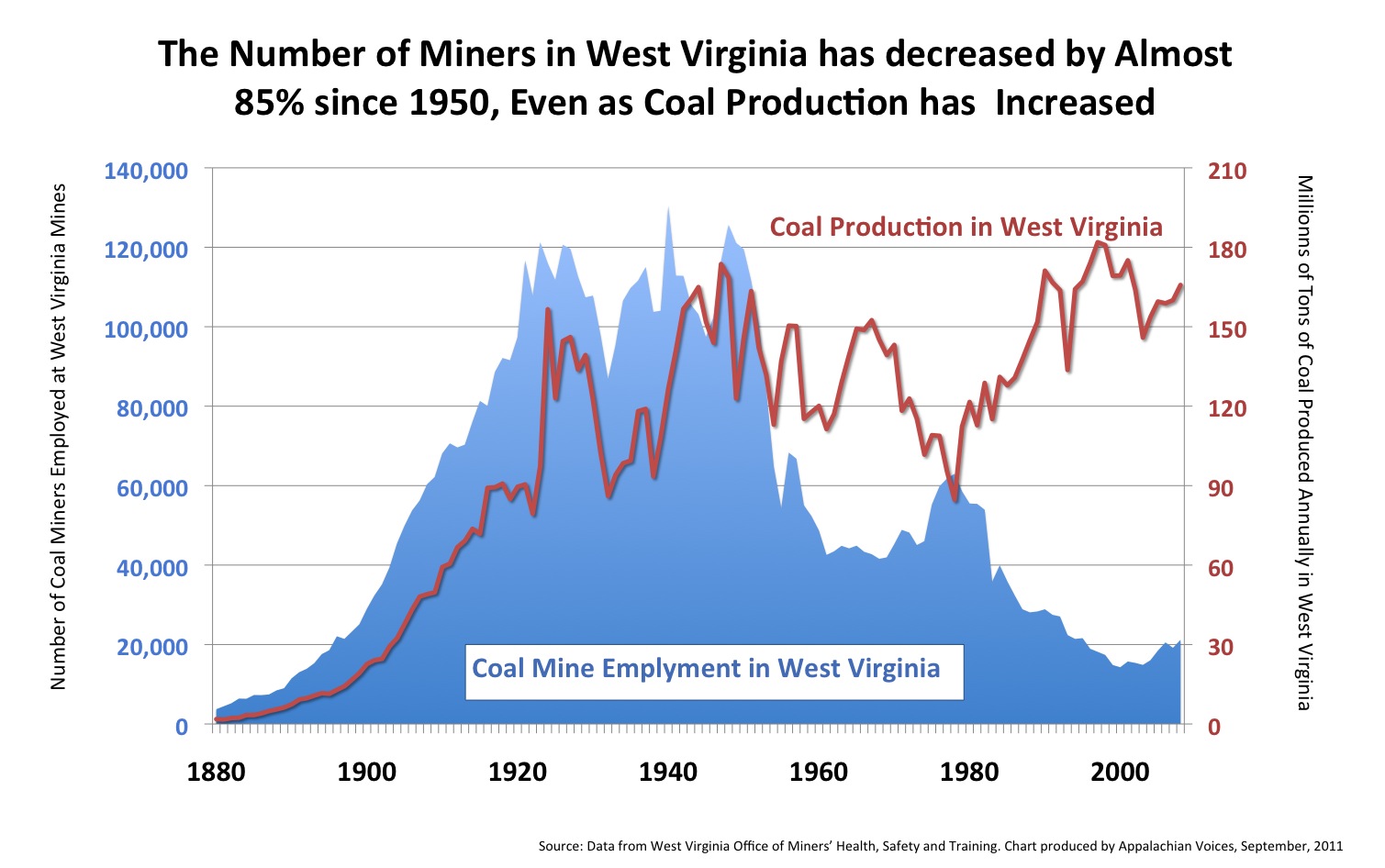 Note that in recent years as mountaintop removal permits are harder to get and more of the coal is mined underground, the number of jobs has begun to increase – a result that can be directly attributed to the EPA’s enforcement of the Clean Water Act.


The report’s reference to 162,000 jobs is supposedly calculated using the premise that for every mining job, 11 other jobs are supported. While one job certainly has an effect on other jobs, the greater effect on local economies that comes from destroying the mountains and streams of a region is completely overlooked. Billions of dollars’ worth of coal has been mined in Central Appalachia for generations, and what significant economic development do they have to show for it? The mountaintop removal coalfields are some of the poorest, least healthy regions in the country. It has also been demonstrated in the study Mountaintop Removal and Job Creation: Exploring the Relationship Using Spatial Regression by Woods and Gordon that mountaintop mines introduced to these areas do nothing to boost employment. This is largely because these mines hire few workers, many of whom are from outside of the community.

The below image demonstrates the correlation between strip mines, in red, and counties with high poverty rates, in darker blue.

Note: This map was created using 2002 census numbers, and the number of people living under the poverty line has increased by approximately 20% since then.

As you can see, poverty rates in areas with strip mines are significantly higher than in nearby areas without mines. These mines destroy enormous portions of land, and harm property values, tourism, and local businesses with them. That’s before getting into the myriad health impacts that have a drag on local economies.

Yet Rep. Darrell Issa, Chair of the House Committee on Oversight and Government Reform, and committee staff are still working diligently to inhibit the EPA’s ability to protect human health under the pretense of saving jobs. They want us to believe that the economy will be fixed by simply removing the burden of government regulation from our tired backs. They will continue to claim to fight for the Mom and Pop coal companies (the same ones that have given Speaker Boehner $1.5 million this year), and accuse the EPA of carrying out a “war on coal.” Unfortunately, they will also continue to ignore new polls that show citizens of Central Appalachia oppose mountaintop removal, and the majority of all Americans oppose mountaintop removal.