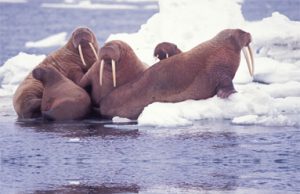 Appalachian Voices is proud to join 50 co-signers on a statement issued by United for America’s Arctic. We recognize the Arctic’s Chukchi and Beaufort Seas as critical habitat for polar bears and marine mammals such as endangered bowhead whales, walrus and seals. Similar to the mountains and streams of Appalachia, the Arctic’s national treasures are worthy of protection.

Alarmingly, Shell Oil is moving closer to beginning a two-year offshore drilling program in the Arctic Ocean next summer. This comes as Shell Oil faces criticism in the UK for failing to promptly report an August oil spill in the North Sea. Shell is seeking federal approval of its Arctic oil-spill response plan despite their plan’s failure to adequately address sea ice and severe weather conditions.

For example, Shell admits that they cannot safely or effectively respond to a spill that occurs more than 21 days into the Arctic drilling season (July to October). This means a well rupture in August could contaminate the Arctic unchecked until ice melts in June.

As stated by United for America’s Arctic,

“A major oil spill in the Arctic Ocean would be impossible to clean up and could have enormous consequences for the region’s communities and ecosystems. During the winter months, the Arctic seas are covered with ice and are not navigable by oil spill response ships. If a spill started as winter ice sets in, the oil could continue to gush into the sea and under the ice for eight long months. Cleanup in the Arctic would be hampered by sea ice, extreme cold, hurricane-strength storms and pervasive fog. The nearest Coast Guard facilities are nearly 1,000 miles away, and there is no port in the Arctic capable of serving large response vessels.”