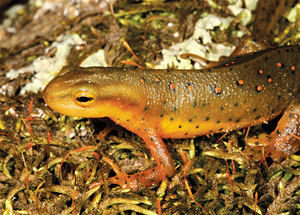 Tennessee’s Great Smoky Mountain National Park is the most visited national park in the entire United States. People flock from all over the world to see the rolling hills and scenic vistas of the beautiful eastern mountains.

This central Tennessee hideaway has become a favorite of hikers, bikers, horse-back riders and off-highway-vehicle enthusiasts, as it contains more than 600 miles of thrilling trails and roads, many former logging routes. Visitors enjoy such woodland wildlife as wild turkey, beaver, an occasional black bear or the newly re-introduced elk.

Hook and bullet enthusiasts will find a fantastic place to relax with big game hunting. In 2009, Royal Blue hosted the first managed elk hunt in Tennessee in over 150 years, with elk as large as 750 pounds going to a privileged permit holder.

However, this special area, like much of the surrounding landscape, is severely threatened by strip-mining. Tennessee has a complicated relationship with the practice, as it produces very little coal, and the coal industry has a relatively small impact on state politics when compared to its northern neighbors like Kentucky, West Virginia and Virginia.

The Tennessee state legislature has enacted legislation that would ban strip-mining on certain ridges, with coal-allied lawmakers going to great lengths to keep the bills from becoming law.

While strip-mining still poses a great threat to many of the states amazing assets such as Royal Blue Wildlife Management Area, the practice of filling in valleys with mining waste has become almost non-existent in Tennessee.

Grassroots groups like Statewide Organizing for Community Empowerment (SOCM) have fought for citizen protections from surface mining, and note that while there is less mountaintop removal in Tennessee than in past years, there is more cross ridge mining.

In the fall of last year, Governor Bredesen asked the Office of Surface Mining (OSM) to administer a “Lands Unsuitable for Mining” (LUM) designation for the North Cumberland Wildlife Management Area, which includes Royal Blue. The LUM, if finalized, would protect 600 feet on either side of the ridgeline from coal mining.

After receiving more than 20,000 comments regarding these protections, the OSM is currently finalizing an Environmental Impact Statement (EIS), which will lead to a draft proposal and further comment period.

“If the LUM goes through, that just saves the ridges of Royal Blue. It is a great first step at protection, but there’s still a lot of strip-mining that could be done outside of that 600 foot zone,” says SOCM organizer Ann League. “These Wildlife Management Areas are little gems that protect something we all hold dear, and we need to make sure that they stay there.”

The Great Smoky Mountains National Park acquires more sulfur and nitrogen pollution than any monitored national park in the country. Visual clarity on a typical day in the Smoky Mountains averages about 15 miles, which is significantly less than normal conditions—about 77 miles. Industrial regions in Tennessee, Ohio and Mississippi produce pollution that is carried eastward into the park.

To read the full article on the health of the Smoky Mountains, visit: appvoices.org/2011/04/12/great-smoky.

Cherohala: View the Mountains from Among the Clouds

Have you ever wondered how the Appalachian Range looked to pioneers hauling a wagon through a high mountain pass? Or to a Cherokee traversing a dividing ridge on foot? A trip on the Cherohala Skyway provides an approximate idea of how the virgin peaks and foggy hollows must have looked in days gone by.

The scenic byway winds 50 miles across the high mountains, connecting Tellico Plains, Tenn. and Robbinsville, N.C. It soars to an elevation of 5,390 feet, and offers multiple overlooks, miles of hiking trails and incredible off-road destinations.

Photo courtesy of the Monroe County Department of Tourism

The name combines the “Chero” from the Cherokee National Forest in which it begins, and the “hala” from the Nantahala National Forest at its eastern terminus. The route was conceived in 1958 by the Tellico Plains Kiwanis Club as means of connecting Tennesseans with their Carolina neighbors and creating employment and education opportunities. The Skyway officially opened in 1996.

A well-planned Skyway trek can provide a perfect mountain weekend, beginning at Tellico Plains and concluding at the Joyce Kilmer Memorial Forest, a stand of old-growth forest just off the eastern end of the Cherohala.

From Tellico Plains you ascend fairly quickly, crossing Stillhouse and Lyons Creek and running alongside the Tellico River. After five miles on the Cherohala, take a right turn at a ‘Ranger Station’ sign. Follow this to Bald River Falls, an incredible cascade at the confluence of the Bald and Tellico Rivers.

Head back to the Skyway and continue east. The road ascends almost 1,000 feet in a 10 mile stretch. An unpaved road on your left marks the entrance to a campground on pristine Indian Boundary Lake. The sites are well-maintained and have picnic tables and lantern posts. A 3.2 mile trail circles the lake and exploring by canoe is a must.

Once you’re back on the Skyway, there are multiple hiking opportunities as you cross the highest peaks around the state line. At the Mud Gap pull off, you can access the Whigg Meadow Trail to a high mountain field perfect for picnicking.

Slightly farther east is Hooper Bald. A leisurely quarter mile path, clearly marked from the road, takes you past rocks with Spanish carvings dated to the 1600s.

In the early 1900s, the bald was home to a hunting lodge, and the area was fenced in and stocked with wild game. As the lodge fell to disrepair, legend has it, wild Russian boars escaped from the broken fencing and proliferated in the nearby mountains. It is said that more than 100 roam there today. The view from the bald shows the incredible vista of the Snowbird Mountain backcountry.

As you descend the Skyway—following the path of Santeetlah Creek—the Cherohala highway will dead end at NC Highway 143. Taking a left here will put you on Country Road 1127, and a well-marked left turn off of this will take you to Joyce Kilmer Memorial Forest.

The loop trail through this stand of gorgeous old-growth forest is the perfect finale to your look back in time. Some of the poplar trees in this grove have been standing for over 400s years.

Nearby Horse Cove campground provides creek-side sites so you can end your journey sleeping with sounds of the Little Santeetlah Creek rushing towards Santeetlah Lake.

Photo courtesy of the Tennesee Department of Tourist Development

The tail-waters of the South Holston and Watauga rivers in Eastern Tennessee rival fly-fishing destinations around the country.

“They’re as good as most rivers out west,” said Slate Lacy, owner of Foscoe Fishing Company.

Though Lacy’s business is located an hour and a half away in Boone, N.C., he guides most of his summertime fishing trips along these paralleling tail-waters. Since the South Holston waters are dam released, the water is always cold, which is ideal for catching trout in the summer.