Fixing What Has Been Destroyed

This past weekend, activists gathered on Kayford Mountain in West Virginia – home of Larry Gibson, keeper of the mountains. Larry, as well as activists from Mountain Justice and Climate Ground Zero hosted the Mountain Justice Fall Summit – a weekend of education, training, and momentum building to end mountaintop removal. 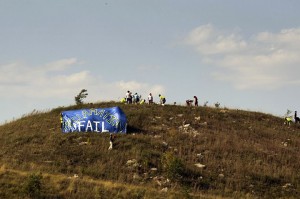 Coming in the wake of Appalachia Rising – a mass mobilization in Washington, DC attended by thousands – the Mountain Justice Fall Summit aimed to continue to push the momentum of the movement. On Sunday, dozens took part in a beautiful and symbolic non-violent direct action, trespassing on a Patriot Coal Company “reclamation” site in order to plant trees.

On Sunday morning, hundreds gathered in Stanley Heir’s Park, a small grassy park dotted with trees surrounded by 12,000 acres scarred by mountaintop removal mining. The day began with a rally in the park with the audience hearing from speakers like John Johnson – forester and environmentalist, Junior Walk – Coal River Valley resident, Larry Gibson – Keeper of the Mountains and Kayford Mountain resident, and former politician Ken Hechler. Johnson gave a rousing speech about the importance of the forest ecosystem in Appalachia and the need to create jobs in reclamation that will begin to fix what has been destroyed by the coal industry. Johnson stressed that reclamation jobs will be able to provide Appalachia with significant jobs as the region transitions away from mountaintop removal coal mining and the destruction of Appalachia. However, he made it very clear that the act of reclamation in no way negates the impacts of mountaintop removal and should not be used as an excuse for further mining. He said that today, those risking arrest to plant trees on the mine site would be playing an important role in the healing process of Appalachia that both the government and coal industry refused to do.

After the crowd was filled with excitement, Larry Gibson, Ken Hechler, and two Columbian Union coal miners led the march from Stanley Heir’s Park to the reclamation site. The march took the crowd through what remained of the forest on Kayford Mountain. What surrounded us as we marched was one of the most bio-diverse forests in North America and its immense beauty was especially noticeable as the leaves of the trees were painted with nearly every color of Autumn. 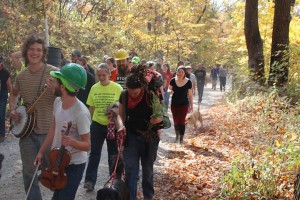 Upon arriving at the edge of the property line, dozens of activists crossed the line onto the property, carrying with them shovels, bags of soil, and water that they would use to plant the hemlock, walnut, red oak, and tulip poplar sprouts to begin the healing process. Shortly after the tree planting began, others unfurled a banner upon the hilltop reading “Reclamation FAIL,” calling out the poor efforts of the coal industry to fix the mountains that they have destroyed. After some interactions with mine security, the activists were told they were trespassing and that the West Virginia State Troopers would be arriving soon. However, after a few hours and some further interactions with mine security and the police, the trees were planted, and the activists were free to go, with no arrests being made.

Having watched the action unfold was an inspiring experience. Having watched these activists risk arrest in order to participate in such a beautiful act like planting trees in order to fix something that has been destroyed truly demonstrates the dedication of those involved in this movement. I also feel that it is proof that we will stop mountaintop removal and the poisoning of Appalachia.

See a video of the rally and action here (Credit: Jordan Freeman).