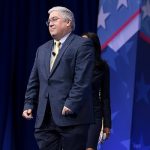 A coalition of West Virginia lawmakers and civil-rights groups are calling on state legislators to also oust and disbar Attorney General Patrick Morrisey for participating in what they’re calling “un-American” efforts to disenfranchise voters in the presidential election. 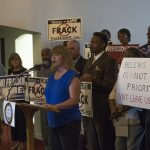 The communities near Duke Energy’s Belews Creek power plant and coal-ash dump in North Carolina have suffered a long time from water pollution. Now the state is poised to allow the natural gas industry to drill fracking wells nearby. Citizens are saying “enough.” The NAACP announced a civil rights investigation at a recent press conference and took its protest to the state capitol at a “Moral Monday” rally. Appalachian Voices is standing in solidarity with these champions for environmental justice.