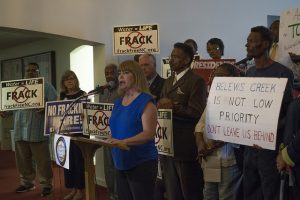 Julia Simcoe is a senior sociology major at Vassar College in Poughkeepsie, New York. She recently finished a “semester abroad” at Appalachian State University and is honored to intern with Appalachian Voices this summer.

Last Thursday, local residents and social justice advocates held two well-attended events in Walnut Cove and Raleigh, N.C. The theme of both events was opposition to pollution in low-income communities of color, and to show that, through solidarity, citizens can work within the system to create lasting changes.

Representatives of the Stokes County, state, and national levels of the NAACP spoke at the conference. Karenna Gore, Director of the Center for Earth Ethics at Union Theological Seminary and daughter of Al Gore, also spoke at the event.

Located in the greater Winston-Salem area, Walnut Cove is a predominantly African-American, low-income community. A press conference in the morning at the Rising Star Baptist Church focused on the negative health effects of coal ash ponds at Duke Energy’s Belews Creek Steam Station, and the state’s recent decision to drill a core sample to assess natural gas reserves in the same community.

Many fear that results from this test site will lead to hydraulic fracturing, or fracking, in the community which has already suffered from the impacts of Duke Energy’s coal ash.

“In the past 20 years, our drinking water was brown, smelled of rotten eggs, and also had calcium and mineral deposits,” said local resident Lydia Prysock.

Though community members eventually fought for cleaner water and improvements were made, Prysock believes their water should not have been polluted in the first place–and should not be threatened further with fracking.

“Water is our God-given right. Even though we have to pay for the piping and the electricity to run it, we still have the right to good, clean drinking water.”

Jacqueline Patterson, Director of the NAACP Environmental and Climate Justice Program, traveled from the organization’s Baltimore headquarters to attend the events and bolster the community’s resistance to pollution. Fracking and other industrial pollutants are “disproportionately located in low-income communities and communities of color, which is unfortunately a national trend,” she said.

Black and white community members and protesters stood behind the speaker’s podium to show solidarity, holding signs that read “Water = life,” “Belews Creek Is Not Low Priority: Don’t Leave Us Behind,” and “Fracking = toxic.” One sign read, “We are high priority.” For me, this slogan invoked the nationally chanted “Black Lives Matter.”

Hours later, many of the same participants held a “Moral Monday” event rally in Raleigh on the grounds of the legislative building. Though the rally focused primarily on expanding Medicaid for North Carolinians, representatives from Stokes County spoke and connected their pollution to problems of health and corporate greed.

The NAACP’s Patterson urged the crowd to see connections between racism, healthcare, and pollution. “Sixty-eight percent of African-Americans live within 30 miles of a coal-fired power plant,” she said. “African-American children are five times more likely to enter into the hospital from asthma attacks and three times likely to die from asthma attacks, so this is definitely a moral issue.”

Local Walnut Cove resident Caroline Armijo also made the trek to Raleigh, and spoke to the experiences of community members.

“We have suffered an extraordinary amount of premature deaths because of coal ash in our community. A friend of mine discovered a stage three brain tumor at the age of 34. She lives on Pine Hall road, which is the road of Belews Creek Steam Station. This is Duke Energy largest steam station and also the home of Duke Energy largest unlined coal ash pond. It is 342 acres large, 12 stories deep, and it contains 39 million tons of coal ash,” she said.

Karenna Gore undoubtedly voiced the opinion of many when she said that a purpose of these moments of community solidarity should be to reverse the “short-term, financial gain for corporations above the welfare of people” that is the status quo.

Around and inside the capitol building, demonstrators chanted: “People united will never be defeated,” and “Whose house? The people’s house.”