Across Central Appalachia, more than a million acres have been scarred by decades of mountaintop removal and other types of surface coal mining. While there are a handful of sites that have been sufficiently reclaimed, many still linger as wastelands. And many continue to pollute nearby waterways with acid mine drainage — moisture that seeps through the mines, picking up acidic contaminants along the way.

Large land-holding companies and coal companies own much of this land, and all too often they have no interest in cleaning up the old mines and restoring the forests and streams. And as more coal companies declare bankruptcy — in part to avoid fulfilling their financial obligations to restore the sites — the future of these lands and nearby communities remains in the balance.

Appalachian Voices is working alongside local residents toward a common goal of turning these scarred landscapes into healthy, vibrant ecosystems once more. And, where appropriate, we’re working to transform these abandoned mines into future sites of sustainable economic development activity.

To help us get there, we are leveraging two federal financing programs to ramp up economic diversity in Central Appalachia. One of our priorities is to ensure that funding is spent on projects driven by local engagement and that yield the best results.

The federal Abandoned Mine Lands (AML) fund was established under the Surface Mine Reclamation and Control Act of 1977 to generate money to clean up mine sites that pre-date the law. A fee per ton of coal mined goes into the fund, which is administered by the Office of Surface Mining Reclamation and Enforcement (OSMRE). These funds are then distributed to state agencies to finance clean-up projects.

Priority is given to projects that address public safety or environmental concerns. While this approach has reduced hazards and pollution, economic development was not a top priority for selecting projects. OSMRE will distribute almost $618 million from the AML fund to 28 coal-producing states and tribes for the Fiscal Year 2017. By comparison, the agency estimates the full reclamation need for all abandoned mine lands at roughly $10.4 billion.

There are a variety of federal proposals to accelerate AML spending specifically for clean-up projects that then repurpose old mine sites for economic development. It’s vital to initiate these projects now, when communities most need it. But we need the political will in Washington to get those proposals through.

Funding from the U.S. Environmental Protection Agency’s Brownfields Program is available to clean up old industrial sites. Grants are made to local governments or agencies, and priority is given to projects that demonstrate an economic development component as well as strong environmental justice and community involvement aspects.

In the Southwest Virginia city of Norton, Appalachian Voices is supporting a project that would enhance recreation along the Guest River and clean up an abandoned coal tipple that is both an eyesore and a source of pollution. In 2015, we helped city leaders orchestrate a community engagement process that allowed residents to have a substantial impact on the design. The project is currently in the environmental assessment phase, and we continue to support Norton’s efforts to secure funding to implement the plan. 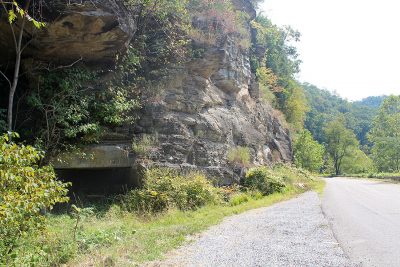 An abandoned underground mine portal near Haysi

To the northwest is the town of Hasyi, Va., where the community is hoping to turn an old coal site into a riverside park with the help of an EPA brownfields grant. The “Splashdam” site is an old logging area that later supported several underground coal mines. Today, a massive “gob pile” of waste coal — enough to fill 33 Olympic-size swimming pools — is the primary source of pollution in nearby waterways, including the Russell Fork River, world-renowned for whitewater paddling.

“The Splashdam site has a tremendous amount of potential to solidify Haysi’s role as an ecotourism destination and gateway to the Breaks Interstate Park. The Russell Fork River is one of our area’s greatest assets, and the development of the Splashdam site will allow local residents and visitors alike access to a beautiful spot along this scenic river,” said Larry Yates, Haysi’s mayor in 2016.