Norton’s walk along the river

By Dylan Reilly, 2016 Riverwalk Design Assistant at Appalachian Voices and student in the landscape architect master’s program at the University of Maryland 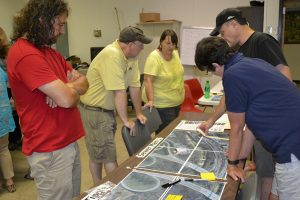 In 2008, Norton city officials began to contemplate using their new sewer main right of way for a two-mile multi-use path connecting the downtown with the community of Ramsey. The proposed Riverwalk presented a unique opportunity to encourage Norton residents of all abilities to recreate along the scenic Guest River and to improve pedestrian connectivity.

Groundwork for the Norton Riverwalk project was laid by the City of Norton’s 2010 feasibility study, environmental research from the University of Virginia’s College at Wise and a 2011 conceptual design for an adjacent coal tipple reclamation project completed by Virginia Tech student Nathan Brown.

As the Riverwalk Design Assistant with Appalachian Voices, I’ve been working in close collaboration with other stakeholders this summer to orchestrate a community engagement process that will result in a feasible conceptual design. This rigorous outreach process is helping Norton city leaders inform the public about the Riverwalk and allow area residents to have a substantial impact on the design, while it is still in its most flexible form. 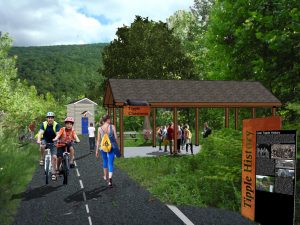 Perspective of a historic coal tipple site reimagined with the addition of a Riverwalk walking and biking trail.

In addition to meeting with local groups such as police, park officials and public health advocates, a large community Design Evening was held on July 7. Participants were divided into three facilitated teams, each team tackling the same design challenge. Teams received three maps for Riverwalk Phase 1, icons of amenities, and sticky notes.

The teams were tasked with determining where amenities like amphitheaters, restrooms and water fountains should go, using the sticky notes to explain their design reasoning and to propose ideas that the icons could not encapsulate. The two-hour Design Evening was a smashing success with 30 participants and great design ideas. The results of the community engagement process and the conceptual plan will be presented to the Norton City Council on Aug. 16.

Project partners are seeking grant funding for the remediation, design and construction of the Norton Riverwalk. A Clean Water Act settlement is paying for an environmental assessment of the site. Appalachian Voices, Southern Appalachian Mountain Stewards and the Sierra Club were recently plaintiffs in a Clean Water Act lawsuit that resulted in the defendant paying $35,000 for a Supplemental Environmental Project to complete the environmental assessment of the coal tipple site along the proposed Riverwalk. This assessment will be completed by the end of the year, opening the door for the project to continue.