Be part of the movement

You can help us create positive change by signing up for our email list to receive timely updates and ways to take action. You can also support our work by becoming a member of Appalachian Voices.

After ringing in the new year, we at Appalachian Voices are taking stock of the many victories achieved in the 117th Congress that just came to a close. The past two years were a whirlwind of legislative activity, as the Biden administration took office with a lofty congressional agenda and control of both chambers of Congress. Many of those priorities were accomplished in the bipartisan infrastructure law (formally known as the Infrastructure Investment and Jobs Act), the CHIPS and Science Act, and the Inflation Reduction Act, and others were accomplished in annual appropriations bills.

A few weeks ago, I wrote about the work remaining in the last few weeks of the 117th Congress. Here’s a look at what we accomplished in the last couple weeks of Congress. 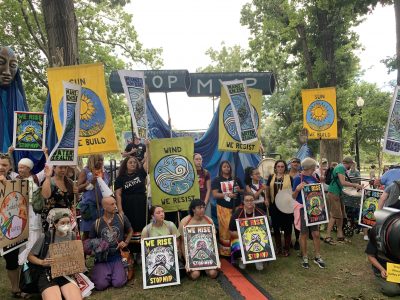 Protesters attend a rally against Sens. Manchin and Schumer’s dirty deal in Washington, D.C., on Sept. 8, 2022. Photo by Jen Lawhorne

After Manchin’s Energy Independence and Security Act of 2022 failed to garner enough support in September, he vowed to keep trying, working on negotiations to advance his permitting bill. In December, the bill took on a new form as the Building American Energy & Security Act — with most of the same provisions, many worse than before. The latest version of the bill still attempted to greenlight the Mountain Valley Pipeline and rolled back protections for communities impacted by energy projects.

In December, activists like you helped us defeat Manchin, Schumer and Speaker Nancy Pelosi’s attempts to attach this dirty deal to the NatIonal Defense Authorization Act in the House and Senate, as well as an attempt to include the bill in the omnibus government spending bill! We know many frontline community members worked hard to stop this bill — and we hope you were able to get some rest over the holidays.

Contact your senators today to thank them or reprimanded them for their vote on Manchin and Schumer’s permitting side deal!

Coal-impacted communities won a huge victory in 2021 when Congress passed the bipartisan infrastructure law, which included $11.3 billion for cleaning up abandoned coal mine lands. Unfortunately, the bill had a technical error that prohibited states and tribes from using any of that funding for “set-aside accounts” that are necessary for treating acid mine drainage in streams and rivers throughout coal country. 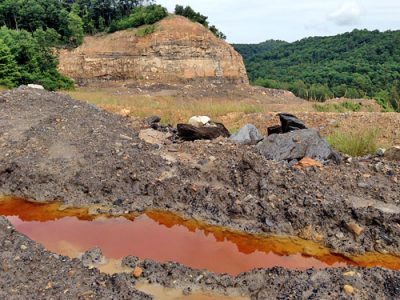 Acid mine drainage collects at the KD #2 mine site shortly after the state halted work at the mine. Photo courtesy the Kanawha Forest Coalition

Acid mine drainage turns waterways orange and makes them unlivable for wildlife. The STREAM Act fixes this problem, allowing states and tribes to use their allocations from the abandoned mine land fund to build acid mine drainage treatment facilities. Thanks to our partners and advocates like you, we were successful in attaching the STREAM Act to the government funding bill — and now the bill has been signed into law by President Biden.

Miners with black lung disease are promised health and disability support when they can no longer work. Currently, the monthly benefit levels don’t keep up with inflation — which is an enormous problem for miners and their families during this time of record inflation. Appalachian Voices supported members of the Black Lung Association asking Congress to update the benefit levels to keep up with inflation, but, unfortunately, we were unsuccessful in achieving this goal in 2022.

Ask your representatives to increase health and disability payments for miners with black lung!

President Biden’s nominees finally approved for the TVA board 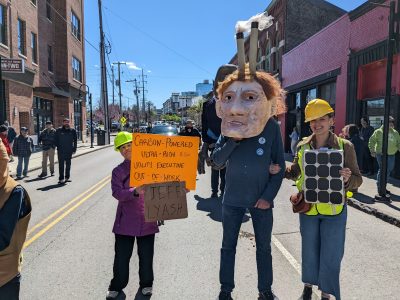 TVA is the nation’s largest federal utility, and it serves 10 million people in the South and Appalachia. Without Senate confirmations for board nominees, TVA would have been down to only three directors on its nine-member board come January. Because the board had been nearly empty, major decisions about how to replace retiring coal plants were delegated to the utiltiy’s pro-fossil fuel CEO, who is planning a major methane gas buildout for TVA.

Since April 2021, the president had nominated six qualified board members — and thanks to your help, the Senate finally confirmed all of these nominees in the last few days of the session!

This is a significant victory that will help put TVA back on track for the people of the Tennessee Valley.

Every year as part of the government spending bill, Congress has to appropriate funding for the Abandoned Mine Land Economic Revitalization Program, which supports economic and community development projects on coal mined land in Appalachian states and on Crow, Hopi and Navajo land. Earlier this year in the Fiscal Year 2022 bill, Appalachian Voices successfully lobbied for the highest-ever funding level for this program at $122.5 million. In the latest government funding bill for Fiscal Year 2023, we increased the funding amount to $135 million. We will continue to advocate for grant transparency and better guidance for the program so that states and tribes can move projects through the approval process more efficiently but with more stakeholder input.

Funding for the Interagency Working Group on Coal Communities

Shortly after taking office, President Biden established a new Interagency Working Group on Coal and Power Plant Communities and Economic Revitalization. Housed in the Department of Energy’s National Energy Technology Laboratory office, the new initiative has never had a budget to use for conducting its outreach and support for communities impacted by the decline in fossil fuel economies. This year, we advocated for the office to receive a formal budget so the staff can do more stakeholder outreach and capacity building with these hard-hit areas. In the Fiscal Year 2023 budget, we won $3 million for the staff to use for this purpose!

Funding for the RECOMPETE program

The CHIPS and Science bill included a provision establishing a new program called the Rebuilding Economies and Creating Opportunities for More People to Excel (RECOMPETE) Act, but didn’t provide any funding for the program. This is a new federal block grant program at the Economic Development Agency designed to empower persistently distressed communities with 10-year grants to use for meeting local economic development needs, creating good jobs, investing in workers and businesses, and connecting local residents to opportunities and resources. The omnibus government funding bill signed into law in December includes $200 million for the new program.

Looking to the 2023 legislative session

A new Congress took control on January 3, and with a divided Congress, any legislative wins will require bipartisan support. We will continue our advocacy to encourage more expedient reclamation of coal mines abandoned in bankruptcy, and pick up where we left off advocating for improved benefits for miners with black lung and improving the services TVA provides to its customers. We also know that those lawmakers who opposed provisions of the bipartisan infrastructure law and Inflation Reduction Act may seek to weaken or repeal certain provisions, so we’ll defend against any of those efforts.

Thanks for being an important part of our federal advocacy — and stay tuned for more ways to be involved.