On Aug. 10, 2021, the U.S. Senate passed a $1.2 trillion, long-awaited, bipartisan infrastructure bill —The Infrastructure Investment and Jobs Act — that would put into action many of the provisions set out in President Biden’s American Jobs Plan. Nearly 3,000 pages long, the bill includes numerous investments in both new and existing programs that provide support in Appalachian communities. However, the bill is not without its flaws, some of which may result in a rocky path forward for getting final sign-off from the U.S. House of Representatives. Here, we provide an overview of the bill’s provisions most specific to Appalachian communities.

Across the country, and most concentrated in Appalachia, millions of Americans live near an abandoned coal mine site left behind by the industry before reclamation requirements were enacted by Congress in 1977. The remaining sites are estimated to cost more than $20 billion to clean up. These sites are actively polluting air and water, putting people, homes, businesses, and other infrastructure at risk, and preventing economic development activities where they are needed the most.

Since 1977, reclamation for this backlog of historic mines has been paid for by a small per-ton fee on coal production, which coal companies pay into the Abandoned Mine Land Fund. Though the fee has never been high enough to pay for all of the abandoned mine reclamation needed in coal-impacted communities, it has been a vital source of revenue for cleaning up the nation’s most hazardous sites. Unfortunately, the fee is currently set to expire after September this year.

The Infrastructure Investment and Jobs Act extends the fee for 13 years, but at a lower rate — a 20% reduction. Though this means less money for reclamation, between $300 million to $500 million less than a full extension would provide over 15 years, the proposal includes an added $11.3 billion boost to the Abandoned Mine Land Fund, to be provided as grants to states over the next 15 years. This funding boost more than makes up for the 20% reduction to the fee; however it means that taxpayers are footing the bill for reclamation instead of coal companies. The funding is distributed to states based on the amount of coal produced in that state before 1977. See an estimate of how much each state will receive.

Read more about improvements advocates want to see made to the AML provisions in the Infrastructure Investment and Jobs Act, and call on the House of Representatives to make these changes.

Mapping wonks can also rejoice. The bill adds abandoned coal mine land and mine waste to the National Cooperative Geologic Mapping Program, meaning more information about the location of abandoned mines throughout the country will be available through this federal database. 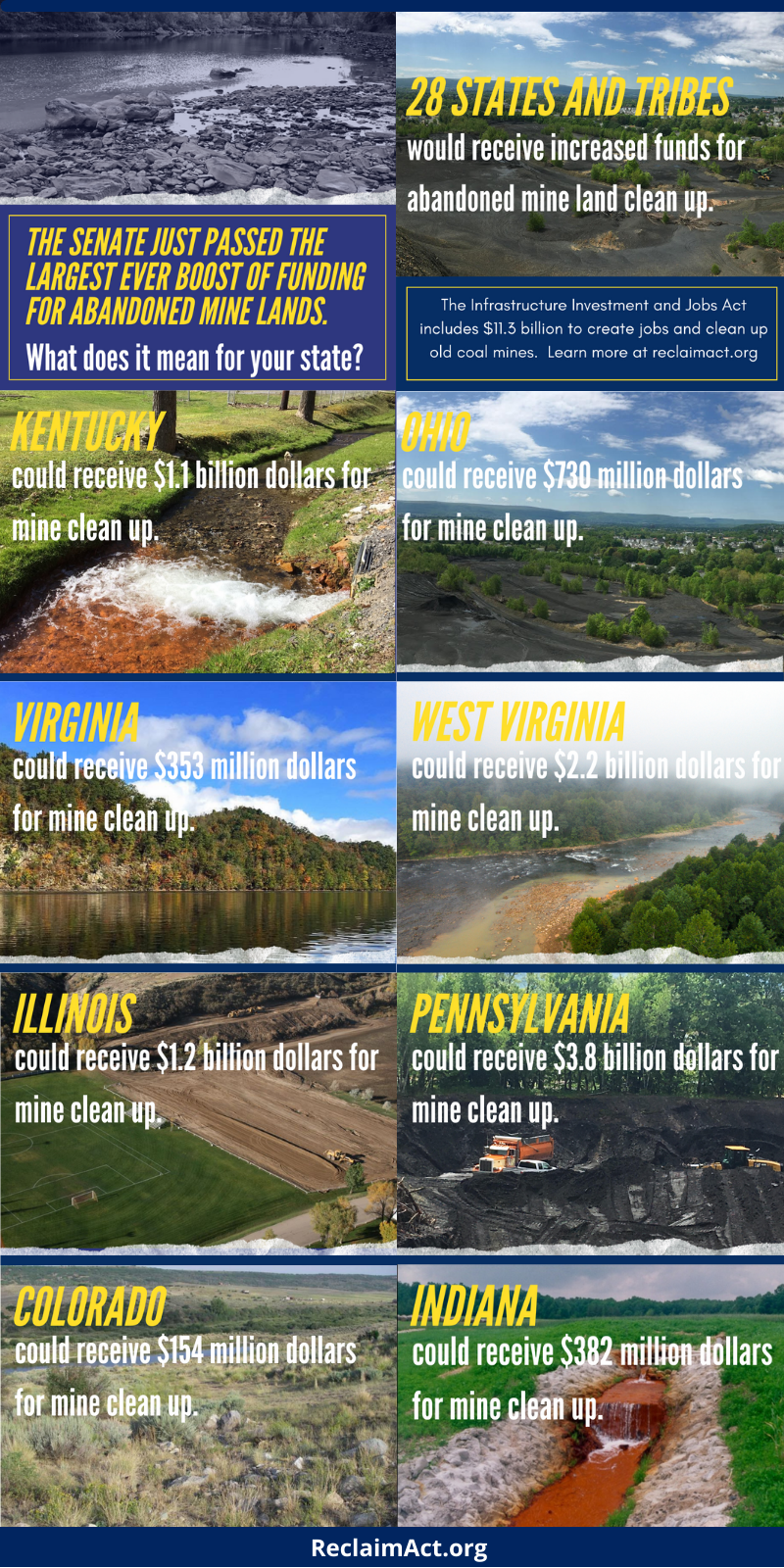 For years, we and our partners in the Reclaiming Appalachia Coalition have been supporting innovative re-use of former mine sites through funding sources such as the Abandoned Mine Land Pilot program. One such innovative re-use is the development of clean energy projects on former coal mines, such as the Mineral Gap Data Center solar project in Wise, Virginia.

Now this work is gaining federal traction, as the infrastructure bill establishes a $500 million Clean Energy Demonstration Program on Current and Former Mine Land program at the Department of Energy. The program will fund five projects, at least two of which must be solar. In selecting projects, the Department of Energy must focus on those that will provide the most jobs and economic benefit, avoid or reduce the most greenhouse gas emissions, have the shortest project development timeframe, and are the most cost-effective. 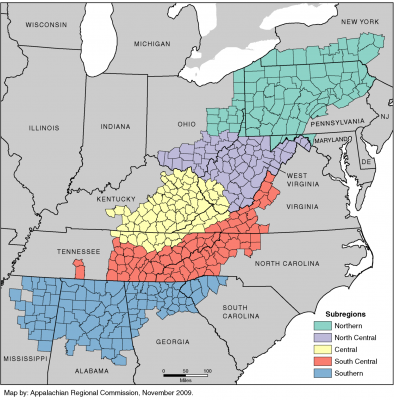 A 2009 map of the Appalachian Regional Commission’s service area, then 420 counties. Map by the ARC. Click to enlarge.

Unfortunately, the bill also requires ARC to make investments toward development of a natural gas storage hub in Appalachia. The bill dedicates $5 million per year for five years to this effort. The funding is intended to support “more effective energy market performance” and contribute to economic resilience in the region. But this investment of funds is a step in the wrong direction for the ARC. For far too long, Appalachian communities have been dependent on dangerous, polluting fossil fuels for their economic prosperity — depending on these finite resources for future economic development is not only a short-term solution, but is also dangerous for our climate and the local environment.

The infrastructure bill provides funding for two programs to help boost advanced energy manufacturing, such as building solar components and batteries, specifically in coal-impacted communities. First, the bill establishes a $750 million grant program at the Department of Energy for advanced energy manufacturing and recycling projects. Qualifying projects include those that create new or renovate old manufacturing or recycling facilities for advanced energy projects or other projects that reduce greenhouse gas emissions. The funding is only available in communities where a coal mine closed after 1999 or where a coal-fired power plant was retired after 2009.

Additionally, the bill funds an existing tax credit program called the “Qualifying Advanced Energy Project Tax Credit.” Out of the $8 billion for the tax credit program, $4 billion is dedicated to communities where a coal mine has closed or a coal-fired power plant has closed in recent decades. Similar to the grant program, the projects must either create a new manufacturing facility or renovate an existing facility that creates technologies such as renewable energy, fuel cells, energy storage, electric vehicles, carbon capture equipment, and emissions reduction technologies. In all, this means $4.75 billion is dedicated to creating new advanced energy manufacturing jobs in coal-impacted communities across the country. 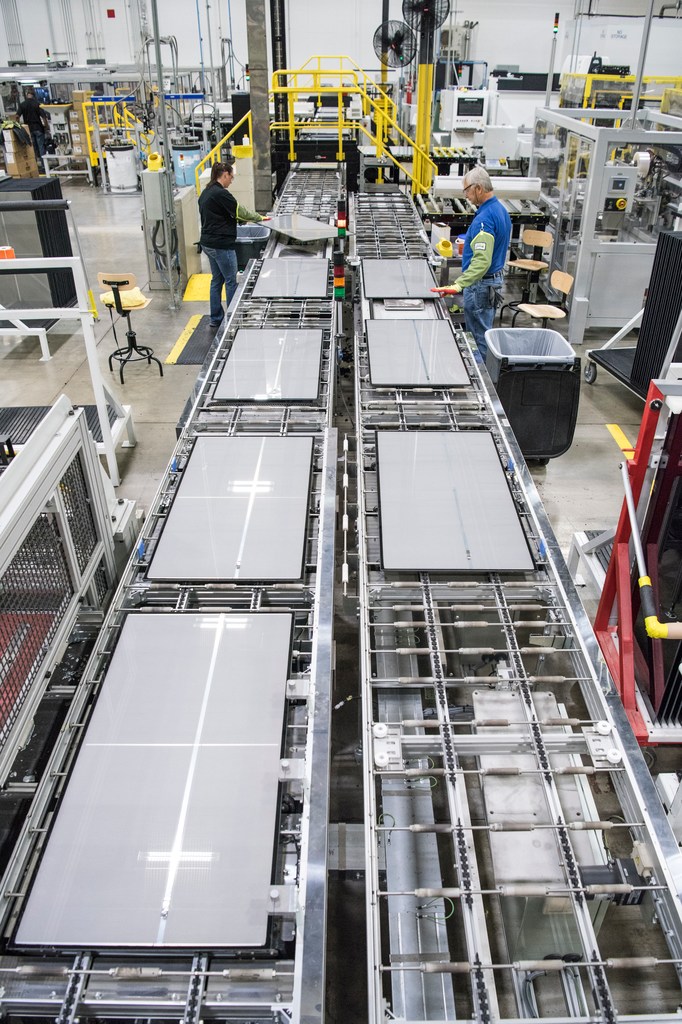 Critical minerals are those that have important uses in our society, but have no viable substitutes and face potential supply disruptions, and are therefore considered critical to the nation’s economic and national security. The Department of Interior determines which minerals are considered critical, and provides a list online with information about how the minerals are used. These minerals are either mined using traditional mining methods, or sometimes can be extracted from hazardous coal waste (such as waste materials from mining or coal ash). Some minerals may be recovered from recycling used equipment, computers, batteries, or appliances. Both mining and recycling of these minerals puts workers in contact with dangerous chemicals that can cause cancer, respiratory diseases, and other dangerous conditions, and can cause many environmental problems for surrounding communities.

Many of the bill’s provisions provide investments for infrastructure nationwide such as roads, bridges, brownfield and Superfund site reclamation and clean energy that will also benefit Appalachian communities. Click here for state-by-state summaries of how much funding each state is likely to receive.

These enormous funding boosts are long overdue for many of the infrastructure systems we rely on nationwide, but especially in Appalachia. Yet many of our nation’s most disadvantaged communities, such as Appalachian coal mining communities, often have trouble accessing federal funding opportunities due to a lack of local resources or capacity to do things like prepare large grant applications or implement complicated infrastructure projects.

That’s why proper implementation of the White House’s Justice40 Initiative, which promises to deliver 40 percent of the benefits of federal clean energy and environmental investments to communities that have historically been left behind, and Interagency Working Group on Coal and Power Plant Communities and Economic Revitalization, which is tasked with listening to communities impacted by the energy transition and steering resources their way, are crucial to making sure funding reaches the communities that need it most.

Appalachian Voices will continue to advocate for improvements to the Infrastructure Investment and Jobs Act in the House of Representatives, while ensuring the bill maintains the important investments in coal-impacted communities. Stay tuned for updates and ways to get involved!

And contact your House representative about the abandoned mine lands provisions in the infrastructure bill!