The tax supports the Black Lung Disability Trust Fund, which helps disabled miners and their families 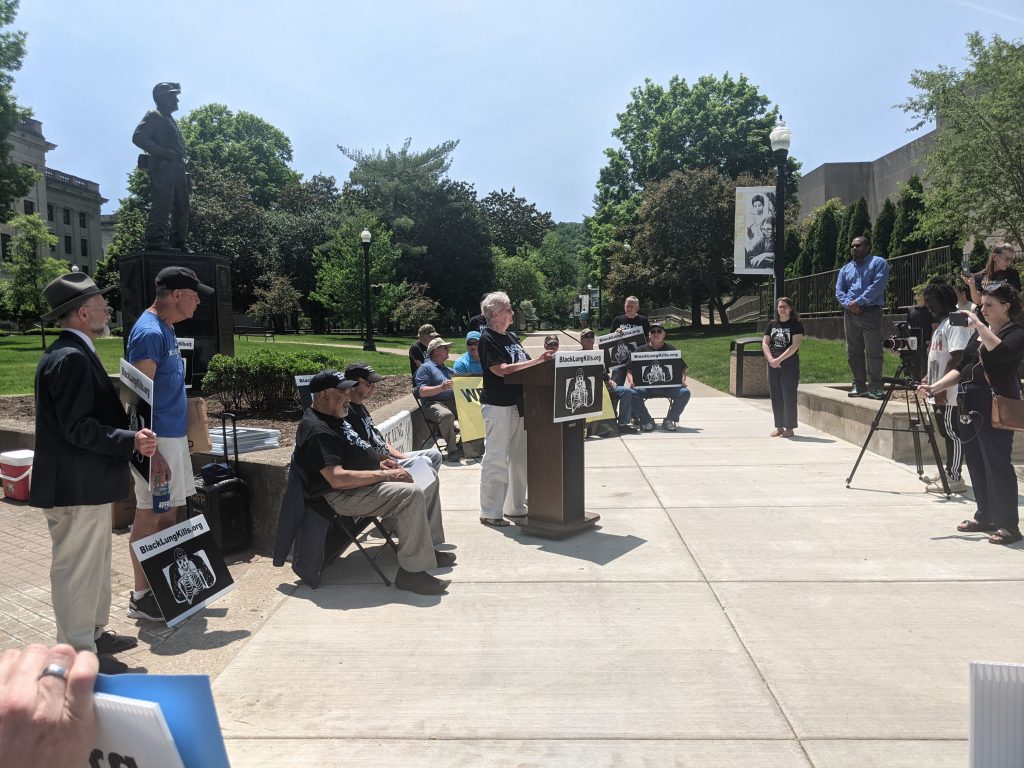 At this May 12, 2022, press conference, leaders from the Black Lung Association launched a statewide campaign for a long-term extension of the black lung excise tax. Photo by Willie Dodson

The trust fund provides health care and a small stipend for miners who are disabled with black lung if their employers have gone bankrupt or no single company can be identified as responsible for a miner’s disease. With the wave of coal company bankruptcies sweeping the industry, the trust fund is more important than ever to ensure that miners get the care and support they deserve and need.

Unfortunately, the excise tax was slashed in 2018 to less than half of its prior rate. Congress passed one-year extensions restoring the tax the following two years, but failed to act in 2021, costing the fund tens of millions of dollars and putting its future solvency at risk.

The Black Lung Association worked with partners like Appalachian Voices, Appalachian Citizens’ Law Center, United Mine Workers of America, and Blue Green Alliance to try to convince Congress to pass a 10-year extension of the excise tax.

In the spring of 2021, Democrats began working on a budget reconciliation bill — a type of legislation that can pass the Senate with only 51 votes, instead of the usual 60. Given the makeup of the Senate, this would allow a budget bill to pass on party lines. Early versions of the sweeping legislation, known as the Build Back Better Act, included a four-year extension of the excise tax — not ideal, but better than nothing. But that broader Build Back Better package died because of opposition from Sen. Joe Manchin, D-W.Va.

But then came the surprise announcement this July that Manchin had reached a deal with Senate Majority Leader Chuck Schumer for a new, smaller version of Build Back Better called the Inflation Reduction Act.

Along with the bill’s historic climate investments (and some harmful concessions to the fossil fuel industry and other problems), was unexpected good news: a permanent extension of the black lung excise tax at its full, historic rate.

“It gives a lot of people peace of mind that their benefits are not gonna get cut,” Arvin Hanshaw, president of the Nicholas County Black Lung Association said at a press conference the day the act passed Congress. “If we lose our benefits, we lose our way of life.”

In a commentary in the Charleston Gazette-Mail, National Black Lung Association President Gary Hairston said, “This legislation will change the lives of so many coal mining families for the better and ensure those who worked so hard powering our country have what they need to support ourselves and the ones we love.”

With this important victory, miners with black lung and their advocates can turn their full focus to other important issues, such as confronting the ongoing surge of black lung cases even among younger miners — which a 2021 study linked to silica exposure.

As large coal seams were exhausted across Appalachia, miners have had to cut through more sandstone to get to the narrower seams that remain. Quartz in the rock turns into sharp, tiny particles of respirable dust that miners inhale as they work.

Though the U.S. Department of Labor’s Mine Safety and Health Administration launched a new enforcement initiative aimed at addressing silica exposure in June, advocates want more done to protect miners. Specifically, they want MSHA to lower the silica exposure limit for miners from 100 micrograms per cubic meter of air to 50 micrograms per cubic meter, the current legal limit for every other industry.

Miners with black lung and their advocates are also pressing for passage of the Black Lung Benefits Improvement Act (S.4511/H.R.6102) , which would make it easier to enroll in the Black Lung Benefits Program, and the Relief for Survivors of Miners Act (S.757), which would ease bureaucratic burdens for widows and widowers receiving benefits following the death of a miner.

Black lung is a terrible, debilitating disease. Coal companies should be required to do everything possible to protect miners from getting it and to take care of the miners who have it, and their families.

The permanent extension of the black lung excise tax is a great starting point. But more must be done, and the work continues for the Black Lung Association and their many supporters, including Appalachian Voices.

Dan is Appalachian Voice's Media Specialist. Previously, he worked as an opinion journalist for newspapers in Illinois, West Virginia, Florida and Virginia, and then as a communications consultant for a number of environmental nonprofit organizations.